The Best Damn Band in the Land performed one of the best halftime shows I have ever seen on Saturday night. The video of it went viral, heading to all corners of the Internet. The show even concluded with the incomparable Script Ohio. And it was almost ruined by Nebraska's kickers.

Share All sharing options for: Did Bo know better?

As much as I love Ohio State Football (and I do so more than almost anything), my love of the Ohio State University Marching Band is probably greater than the football team. Chalk that up to a number of things: I played the tuba for eight years, through elementary, middle and high school. My Grandma once offered me a $10,000 trust in my name if I ever played Sousaphone in the band and dotted the "i" in Script Ohio. Because the Chimes and Carmen give me goosebumps on the 75,000th listen.

During Saturday night's all-too-fun shellacking of Nebraska, the halftime show was just one part of a great night for Buckeyes fans, a show that was to culminate with Script Ohio, in all it's glory. I never played tuba after high school (though I really could have used that $10,000), but I have a tremendous amount of love and respect for one of the great institutions in college sports and college football in general.

It was just a shame that our newest Big Ten compatriots didn't think the same way.

The videos featuring the Band's halftime show started popping up on Facebook and Twitter on Sunday morning. You probably saw the awesomeness that was the Super Mario Bros. and Halo and the ZOMG THE BAND MADE A GALLOPING HORSE ON THE FIELD and all of that. Luke posted this earlier, but it deserves all the views it can get:

Such an awesome video, such a great show and the cherry on top of the whipped cream on top of the sundae of awesomeness was that the fans got to see Script Ohio. But watch this video and listen closely at the 13:40 mark, and you start to hear the fans turning. Are they booing the Band? Of course not. The band could play a mash-up of the Michigan and Notre Dame fight songs, in a show called "A Tribute to Bret Bielema, The Country's Best Coach" and the scarlet and gray clad thousands would still cheer. No, they're not booing the Band. They're booing some special, uninvited guests. 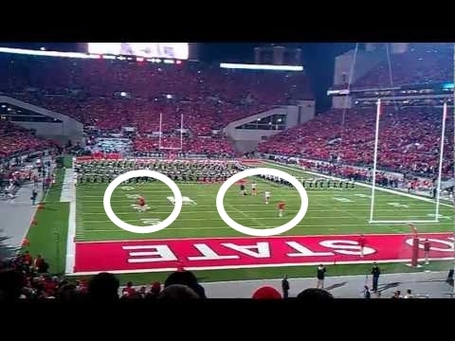 Within those circles are Nebraska players and coaches, about to begin kicking field goals. On the field. In the middle of Script Ohio.

Maybe I'm a band dork for saying this, but trotting out your special teams to get in a few reps at this point was not only horribly timed, but pretty low in the class department when you consider what Script Ohio means to Ohio State band members. First you have to play the Sousaphone, which is probably the least attractive instrument in any situation that isn't dotting the i. Then you have to make the band, which is difficult as hell in and of itself (much of it detailed here). Then you have to wait. At least four years, sometimes five, until you are "ranked" high enough to get the opportunity to represent the Band, the team, the university and the state of Ohio (not kidding) on one of the most grand stages. It's a huge honor to the Sousaphone player, one of those things that so often lives up to and exceeds the hype surrounding it.

Now, full disclosure: there are probably a lot of people who don't give a rat's ass about a few special teamers trying to get a few kicks in during a halftime show. Most of those people exist on message boards in the Internet ether. If you're a Nebraska fan reading this, you probably don't care, either (but thanks for the pageviews).

And let's be even more honest: the Band was performing at a football game, the football game wasn't happening at a band concert. If the kickers wanted some time on the field, they probably have the right to do so. What concerns me, as a Buckeye fan, as a TBDBITL fan, and as a former tuba player, is that the powers that be at Nebraska should really have known better.

Ross Els is listed as the "Special Teams Coordinator" for Nebraska. He is an alum of Nebraska-Omaha and, in his role as linebackers coach and special teams coordinator, he has done a fairly good job since coming to Nebraska in 2011. Maybe - MAYBE - he wasn't aware the Script Ohio was going on when he sent his kickers out to get a few reps in. But he should, at this point, know how important that tradition is to the Buckeye faithful. Els spent six years with Frank Solich down in Athens, and in one of those years, 2008, the RobertKittens came up to the 'Shoe (and gave the Buckeyes a relatively horrible scare). He's been in the state, he's been in the 'Shoe, there's no doubt in my mind that he has some inkling of how important Script Ohio is to the faithful. But if he didn't, that's forgivable.

Where it stops however, is at the top.

Bo Pelini's Ohio State pedigree was mentioned at length in the game broadcast, and everyone here should know that Bo played safety for Earl Bruce and John Cooper from 1987-1990. He's a Buckeye. Now, Pelini probably doesn't micro-manage his team to the point where his position coaches and coordinators tell him when and what they're going to do. But if Pelini knew word one about this and still allowed it to happen, in no way, shape or form is that forgivable. Not to an alum.

This whole situation is going to go into the history books as, at most, a footnote on the throttling the Buckeyes gave Nebraska on Saturday night. It was a huge win over a new rival on Homecoming, on Nebraska's first visit to the 'Shoe as a member of the Big Ten Conference. But it was also a big night for the band, and their moment in the sun after a fantastic halftime show lost some of its sheen. Let's hope the Buckeyes remember that the next time they line up against the Huskers. After all, who doesn't like a repeat performance, be it with a football team, or a marching band?