Sure The Sporting News just ranked the Buckeyes 3rd nationally, but don't tell the CollegeRPI.com guru.

Share All sharing options for: Jerry Palm is unimpressed with the 2012-2013 Ohio State basketball team

Ohio State opened men's basketball practice not even 24 hours ago. The team seems all but likely to be a preseason top 10 team, and depending on whom you ask, the Buckeyes could be quite good. Potentially really good.

However, the long standing expert proprietor of CollegeRPI.com (and CollegeBCS.com) who now makes his projections on the regular for CBSSports feels otherwise.

Alright so maybe as our own Matt Brown alluded to, the Buckeyes will have to play their way into a higher seed. That's certainly reasonable. So if not a one, maybe a two right? No, still not a two? Alright, a three seed. I can live with that. One of the twelve best teams in the country. With two potential All-Americans in Deshaun Thomas and Aaron Craft, that makes a lot of sense. Well no? A four? Eh, stretching it, but given some question marks about the rotation beyond those guys and maybe the national media's unsureness about former McDonalds All-Americans Amir Williams, Trey McDonald, and/or LaQuinton Ross, maybe, *MAYBE*, I can see a four. Guess again: 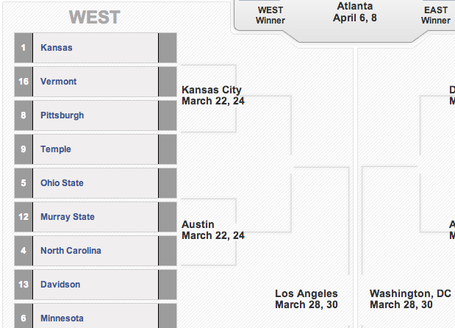 Palm has Indiana (1), Michigan State (2), and Michigan (3) all seeded higher than the Bucks. There's little questioning his (admittedly popular) prediction of Indiana to win the league, but seeing Ohio State all the way down at the five is still a bit of a shock to the system.

We'll have to trust his expertise until the Bucks can get on the court and either validate his skepticism or disprove it altogether.