Back up in yo C-bus with the resurrection.

Click here or below for every pertinent stat you could possibly ever want about Purdue vs. Ohio State, via the sorcerers at StatMilk. 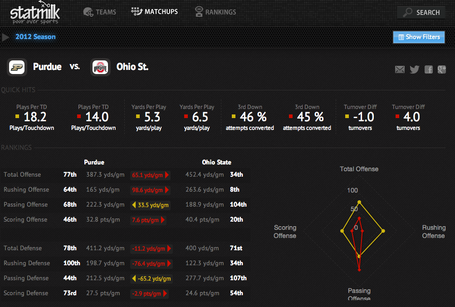 Pizza delivery drivers, FM sports talk radio hosts antennae measuring contests, and mock outrage about a defense that while below average, might not be as terrible as instinctively you've been led to believe. That's the last two weeks of Ohio State football.

The Buckeyes return to Columbus with catharsis on the mind (certainly in more ways than one). Purdue heads east trying to find themselves after two trying beat downs at the hands of Michigan and Wisconsin.

While the Ohio State faithful hope for a defensive return to form that may yet salvage faith in Luke Fickell and Everett Withers following some exhibitions well below historical level of acceptance at Ohio State, Purdue hopes to replicate the magic that lead them to an upset victory over the Buckeyes in West Lafayette a year ago.

Below is your open thread. As per usual, pay it forward. If Earle Bruce would think you were being a pretty huge jerk, you probably are.