After a huge gain, the Buckeyes' Braxton Miller didn't get up.

In the midst of a game that Ohio State hadn't exactly looked their best, the Buckeyes had the importance of the game as a whole minimized when their star sophomore quarterback Braxton Miller went down with what appeared to be a shoulder or head injury.

Miller was scampering down the field on a long gain in the way Ohio State and college football fans in general have grown accustomed to when Purdue's senior cornerback Josh Johnson caught up with Miller from behind, grabbed the back of his jersey (though perhaps a bit underneath what's traditionally considered the horse collar), and dragged Miller down to the turf harshly. The Buckeyes' prolific Heisman candidate lay seemingly motional for a few moments while being attended to by an Ohio State support staff.

With Miller having to be assisted to even reach the sidelines (and appearing to be in real pain) before ultimately being carted off the field, Ohio State backup Kenny Guiton resumed the quarterback duties. Guiton's been a capable caretaker during the times the Buckeyes' star has been relegated to the sidelines with dings and bruises earlier in the season, but any indefinite period of time without Miller will certainly impact Ohio State's stretch run (which includes Penn State, Wisconsin, and Michigan). See the Johnson tackle in action below:

One early report confirmed the line of thinking that Miller had undergone some kind of head injury. 97.1 The Fan (the Ohio State radio network's flagship station)'s Marty Bannister reported the following:

ESPN's Lewis Johnson also reported that a security guard called for a gurney and a neck restraint,and that Braxton Miller appeared to be headed from the locker room to an ambulance to be taken immediately to the Ohio State Medical Center: 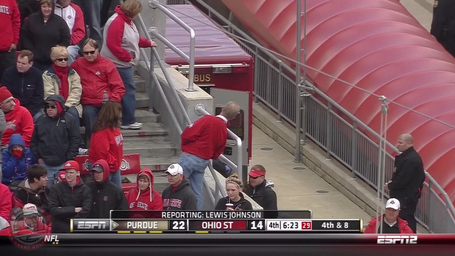 FOX's Eddie George has since reported that his Ohio State sources are saying Miller is suffering from a "head and chest injury" but that an early CAT scan was negative. Miller was said to be currently undergoing an MRI to try and gain more clarity on the situation.

During his post game press conference, Urban Meyer said he himself still wasn't update to date on Miller's status and just after 5 PM EST Saturday night, the Ohio State University released the following:

More updates as they come.