The Buckeyes are purported to be donning some retrothrowfutureback duds in two weeks against Michigan.

The question has been on the mind of a number of hardcore uniform watch devotees and collectors alike for the better part of the last calendar year: just what kind of uniforms will Nike have in store for Ohio State to woo recruits (and fans) alike with during the 2012 season and who will they wear them against?

Those more traditional in their preferences have probably been alternatively asking themselves, "what abomination is Nike going to further commercialize Ohio State with at the most inopportune time in the biggest game of the year... again?" I suspect neither party is fully right nor fully wrong.

Back during ESPN's All-Access: Ohio State training days (which has paid off in spades in recruiting, per the horse's mouth), one shot revealed a framed picture in the background of Urban Meyer's office during a Meyer talking head which seemed to indicate potential new uniforms for the 2012 season (or beyond): 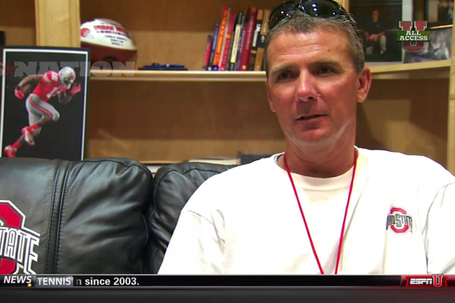 When you zoom in, you could see a little bit more details on the uniforms, which looked an amalgamation of the present uniforms with the ones worn during Eddie George's Heisman trophy heyday: 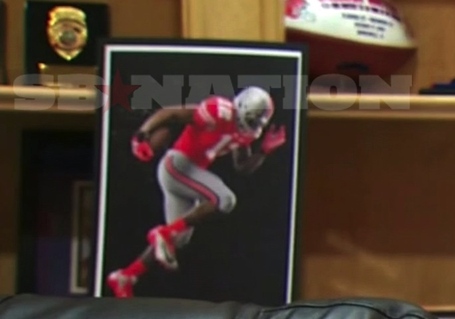 Now (courtesy of Ohio State Rivals beat reporter Ben Axelrod) it appears the Ohio State athletic department's official team store may have spilled the beans on what the team could be wearing when Michigan comes to down at season's end:

A closer look reveals the following: 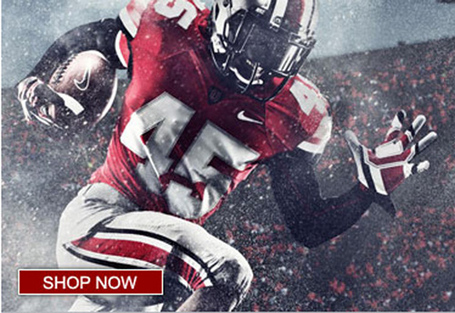 The shoulder stripes and uniform numbers sure seem to fit the bill. The helmet stripe looks rather gaudy, but is an interesting take on Ohio State's recent historically standard lids. But hey, at least the Block O gloves are pretty sweet.

So are these the real deal? Just a Scarlet herring? Let us know what you think about the (potential) new digs in the comments below.