Whether it was a case of drinking and tweeting, jumping to conclusions, overt optimism, or the ever popular account being hacker, the University of Maryland's official twitter account, @UofMaryland, had some interesting, rather pointed things to say about the Terrapins' potential move to the Big Ten Saturday evening.

The account began tweeting at 9:56 PM eastern standard time and then proceeded to tweet around every five minutes for the next twenty minutes opining for a prospective move to the Big Ten Conference. The account, which has over 15,354 followers, then strategically deleted two of the tweets, before ultimately getting rid of all four. We preserved the tweets for posterity sake, and while it's unclear whom exactly mans the account (if it's a student/intern of any kind, they may want to pray for mercy if it wasn't a case of identity theft), it should be interesting to see if this a smoke screen of sorts or if someone was openly speculated based on some kind of privileged information they may have been privy to.

The tweets in question were as follows: 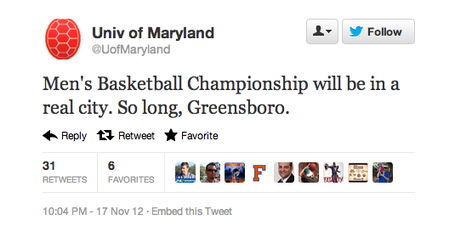