Before they've even squared off against each other, Urban Meyer and Brady Hoke have brought 'that feeling' back to The Game.

Since 1988, with the exception of a brief run from 2001-2007, The Game has been de-emphasized, intentionally or unintentionally in one way or another, by either the Michigan side or the Ohio State side. Futility, by one side or the other, took the intensity of this rivalry down a notch, for long periods of time, for one or the other school.

Those days are gone.

When John Cooper came to Columbus, he brought with him a reputation as an X's and O's guy that could recruit and win a lot of games. And for the most part for his time here, he did just that. Yet, he was an outsider, and he never 'got it' about The Game. But we figured he would once he came here and stated coaching here.

He didn't win the one game that matters most to Ohio State fans, and as the pressure mounted, Coop tried to de-emphasize The Game. That blew up in his face, and the pressure mounted. The results? 2-10-1, and an equally dismal bowl record lead to Cooper's ouster after the 2000 season. Along the way, he had some of the most painful losses in The Game's history. I'm not going to go over them here, but we know. Oh, do we ever know.

During that run, Michigan became so dominant in this rivalry that they started calling Michigan State and Notre Dame bigger rivals than Ohio State. And although it was half joking, it was also some truth to that statement – I mean, you can't have a rivalry if one team never wins, right?

Enter Jim Tressel. From day one, Tressel was a guy that understood the exact importance of The Game. When he made his now legendary speech at a basketball game on the day he was introduced, it sent a message to Ann Arbor that this was a new era:

310 days later, Michigan received that message, loud and clear. Finally, it was an Ohio State team that upended a Michigan squad with big aspirations. In 2002, Ohio State vanquised Michigan again during their magical run to the national championship. But in 2003, Lloyd Carr, a vanguard from the old 'Michigan Man' school, ended whatever bleak hopes Ohio State had of winning back to back national titles.

The Game was back on. Yet, it really wasn't. Carr seemed tired, Tressel was making a name for himself, and when Carr bowed out after the 2007 season, he could only claim that 2003 pelt against Tressel. Ohio State began a 10 year run as dominant as Michigan had during the Cooper era.

You raised us all up, Rich Rod. To levels of absurdity I didn't think possible.

After Carr retired, Michigan fumbled the Rich Rodriguez hire, and with Rich Rod, they got their own version of John Cooper. Like Cooper, Rodriguez was an outsider that never was fully dialed in in terms of The Game, never embraced the importance of it to the fans and the school, and never really came close to beating the Buckeyes. Those three years saw three beatdowns at the hands of Ohio State to the level that Michigan wasn't even competitive, and like Cooper, his lack of results against Ohio State hastened his departure. Rich Rod may have tried to raise up the Michigan fan base, but he never truly 'got it'.

But what does it mean when we say that guy 'gets it'?

For Michigan, Brady Hoke is a 'Michigan Man'. And of course, the primary qualification for being a 'Michigan Man' is being from Ohio. Hoke was born and raised in Kettering, and decided to cheer for Michigan because everyone else in his town and school was an Ohio State fan. He was an assistant at Michigan from 1995-2002, and at his introductory press conference as the head coach, he said he would've crawled from San Diego "across broken glass" to take that job. He immediately got under the skin of Ohio State fans by referring to Ohio State as 'Ohio', something that everyone, including the Wolverines basketball coach John Beilein has picked up. But that kind of blew up in Beilein's face when they lost to the real Ohio in the NCAA tournament.

Hoke has rightly proclaimed, from day one, that the Michigan season cannot be considered a success if they don't beat 'Ohio', and he is 1-0 against the Buckeyes, exorcising a decade of Wolverine demons and failure against Ohio State with a cathartic 40-34 win in Ann Arbor last season. And as OSU was going through their tumultuous 2011 season and recruits began to waiver, Hoke took advantage of it and grabbed a highly prized OSU commit, and nearly got another.

In what was and should've been a cherry on top of a turd sundae, that loss to Michigan last year was forgotten about in Buckeye Nation by that following Monday afternoon.

Enter Urban Meyer. My Michigan friends who had predicted a decade of payback after 2011 were angry, and very worried. As Hoke changed the face of the rivalry for Michigan, Meyer changed the face of it for Ohio State, and they knew it. But, they thought to themselves, he'll only be around a few years until a bigger, better deal comes along.

I don't think they could be more wrong. Because Meyer also 'gets it', as much as Jim Tressel did.

Meyer calmed a nervous fan base and shored up what turned out to be a phenomenal recruiting class, while at the same time assuring fans that the native Ohioan 'gets it' in terms of this rivalry. The first schedule that OSU put out after Meyer was hired didn't have the name 'Michigan' on it, it had this instead: 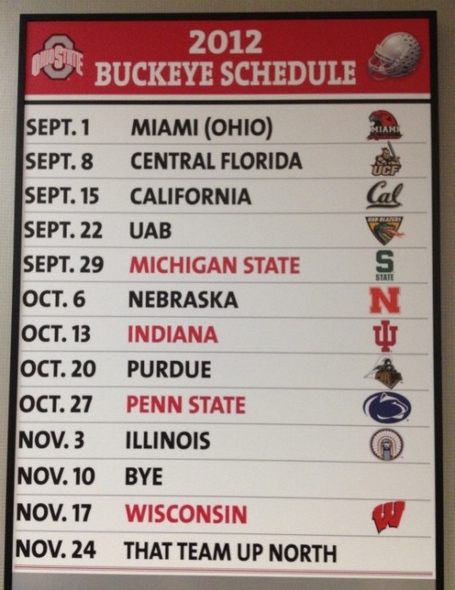 He also had a couple of other tweaks to That Team Up North that appeared at the Woody Hayes Athletic Center that took a shot at Michigan's vaunted academic reputation: 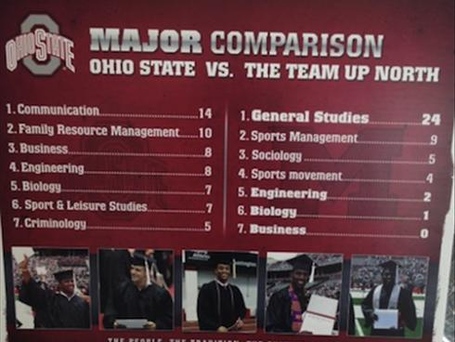 The Leaders and Best...In General Studies.

That set Michigan fans off in a way we hadn't seen in a long time, and months before the first snap between teams coached by Hoke and Meyer, they've turned The Game's intensity up to a Spinal Tap 11, months before the opening kickoff. In his Wisconsin post game press conference, Meyer was asked about this week, and what the hard fought Wisconsin win means in comparison. Meyer, as usual, minced no words.

"You talk about a rivalry, this is a great game against a very good team that's been to Rose Bowls," Meyer said, speaking of the Badgers. "But this is not our rival. When you talk, you talk about that R word, you talk about this week. This is all I've ever known growing up. And we have a group of coaches, eight of our nine coaches are from the state of Ohio, and there are a lot of players in there already excited, already talking."

Personally, I think it's wonderful to have two guys so emotionally invested in the outcome of The Game. Hoke and Meyer have both owned what it means to be in this Rivalry, and they aren't backing down from it, nor or they trying to downplay it. They are embracing it, and they are relishing the opportunity. Their success on the field, combined with knowing what Ohio State-Michigan means to both fan bases, has returned The Game back to it's rightful place as the best rivalry in all of sports.

Go Bucks. Beat That Team Up North. Like a drum.

Why we hate: inside Michigan-Ohio State