Share All sharing options for: 6 GIFs that defined Michigan-Ohio State

Perfection, in a broad sense, refers to a sense of complete flawlessness. The Ohio State Buckeye football team finds them self personifying that very state after successfully defeating the Michigan Wolverines, 26-21, to clinch an unbeaten 12-0 2012 record. Sure, there won't be a bowl game to tie the whole thing together. And yes, we'll be left to second guess until the end of time both whether Gene Smith imposing a bowl band a year prior (the NCAA might have arbitrarily tacked on a second year ban, to be fair) would've spared this group as well as whether or not this team could've hung with the Notre Dame's and Alabama's of the 2012 college football world (our guess: yes). Still, there's just something about finishing a season unscathed.

A day later, we find ourselves unable to get a number of mental images from The Game 2012 out of our heads. It'd be selfish if we didn't help transfer those some sequences from our brains through our mouses to your computer monitor. Without further adieu, feel free to live vicariously through you of Saturday, November 24th, 2012, with these Michigan-Ohio State animated GIFs.

We touched on a couple of these in our The Game recap, but damnit if we weren't going to rehash the best one. SO. MUCH. HATE. Love it.

Contrary to what ESPN's bottom line said for the better part of the day, this awesome moment happened between the first and second quarter. Blow hard, faux moralist national columnists, check your mock outrage at the door. We've got a legend to honor.

We'll miss watching you, XBRAX 360. Until we see you in New York City as a Heisman finalist, be still our beating hearts.

Errybody gotta eat? This the food, yo.

We have no idea what C.J. Barnett was doing here, but after making that late game (essentially clinching) interception, we're totally on board with it.

And then of course the Gatorade shower. Seniors Jake Stoneburner and Zach Boren rush to celebrate with their head coach, who got to enjoy the bath in 33 degree weather with a 14 mph windchill. Pretty chill. Literally.

And what the hell. While not a GIF, this scene is too awesome not to rehash. Perfection. How sweet it is. 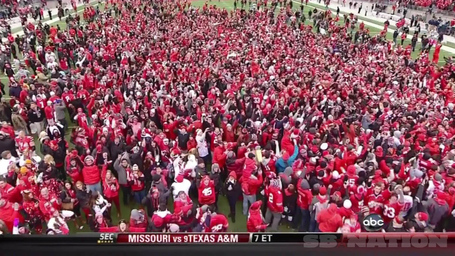 UPDATE: Check out the comments below for some reader requested Zach Boren-on-Wolverine crime.