The Ohio State Buckeyes head to Cameron Indoor Stadium for the first time ever where nothing is certain to be easy.

If you're a fan of the sport of basketball and if you so much as watch one college hoops game a year, the odds are you fall into one of two camps: you hate Duke or you're a contrarian. Of course there's the tiny, passionate majority that have a legitimate stake to Coach Mike Krzyzewski's mind boggling NCAA record 860 career wins and four national championships who went there, but the Ohio State faithful have a hard time wrapping their heads around the notion of an active alumni base only slightly larger than the number that fill Ohio Stadium 8 times each fall.

If you're a fan of the sport of basketball and if you so much as watch one college hoops game a year, the odds are you fall into one of two camps: you hate Duke or you're a contrarian.

Of course who are Buckeye basketball fans to jest? While for almost a decade they proudly wore their love of the hardwood iteration of the scarlet & gray on their sleeves like strangers in a strange land (only to have their brief flirtation with national excellence in the early 2000's squashed by a recruiting scandal), modern multi-money sport relevance begins and ends with the name Thad Matta. But what an 8 years it's been.

After a 2004-05 season which saw the Buckeyes ineligible for the post-season (but end the year with one of only two wins over national runner-ups Illinois), the Buckeyes have averaged 28 wins a year making 6 NCAA tournaments and winning the NIT the lone year they didn't. Tack on four Sweet Sixteen appearences, two Final Four berths, and a national runner-up finish of their own, and you're up to speed on the gilded age of modern Ohio State basketball. 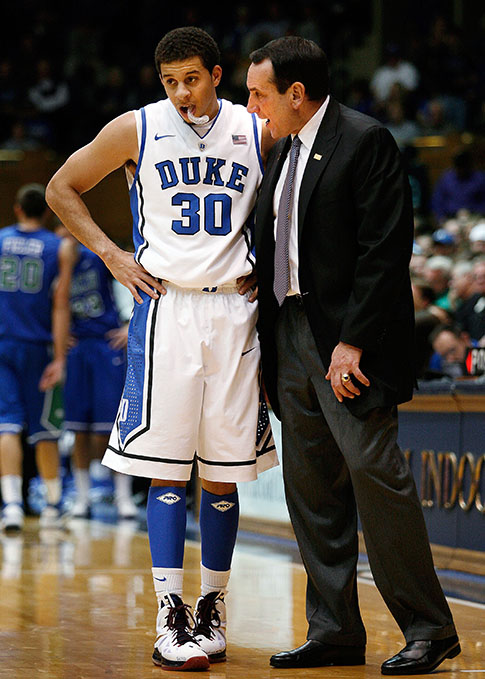 "It doesn't matter what team we would have played that day, I don't think anybody could have beat us."

Flash forward to 2012 and Matta's latest incarnation of Ohio State Buckeyes seek to improbably match an 85-63 lightning in a bottle victory over the Duke Blue Devils a year prior in Columbus. Ohio State jumped out in that one to an 11-0 lead and despite Duke's best efforts to keep it close until the first under-8 TV timeout, the Buckeyes would never trail again. Buckeyes guard Lenzelle Smith Jr. would later say of the game, "It doesn't matter what team we would have played that day, I don't think anybody could have beat us."

But this isn't that Duke team. They're a year older, a year better, and while 5-star McDonald's All-American Austin Rivers is on to the greener shores of New Orleans playing for the NBA's Hornets, 5-star McDonald's All-American Rasheed Sulaimon is taking up some of the same clout in the starting lineup. Another former McDonald's game participant, Quinn Cook, has more formally replaced Rivers, and while Cook managed 20 minutes or more in but one of Duke's final 20 games last year, he'd score 11 of his 15 points in the final 7:46 (including Duke's final 8 of the night) this past Saturday night in a win against Louisville in the championship of the 2012 Battle 4 Atlantis tournament.

Quinn Cook hasn't seen a defender the caliber of Aaron Craft nagging him up and down the court every possession yet.

While Louisville's Peyton Siva was a fine warm up act for Cook, he hasn't run into a guard of Craft's caliber defensively in his young career yet. Though Craft doesn't have the explosive first step Siva does on the opposing end of things either, Craft's offensive game has blossomed by necessity on the young season and given the 19 Siva had against Cook, could present an opportunity for the Buckeyes' junior guard to get into the mix scoring the basketball. 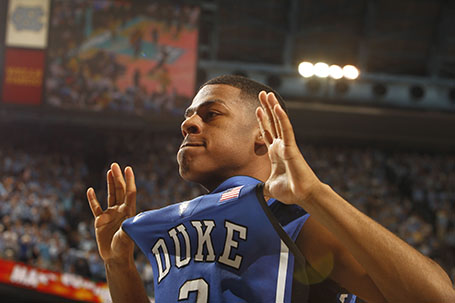 Where the match ups begin to get interesting for Matta is who he decides to leverage to defend senior Seth Curry and whom he deems better equipped to handle the talented frosh Sulaimon. Both left much to be desired from beyond the arc against the Cardinals (2-9 and 1-6 respectively) and have a reputation for desiring to shoot their ways out of holes (not exactly unlike the Buckeyes' Deshaun Thomas). Curry as the veteran of the two probably makes more sense for junior defensive stopper Lenzelle Smith, but Sulaimon's scoring prowess could prove challenging for sophomore Sam Thompson. Thompson has the athleticism to go toe-to-toe with Sulaimon, but maybe not the on the ball basketball accumen to slow him down consistently. If this matchup comes to fruition, it definitely merits attention.

The Blue Devils' Ryan Kelly on the Buckeyes' Deshaun Thomas, however, could be the one to keep an eye on all night. Both players possess a flexibility offensively to score the basketball from both outside and in with Kelly having the size advantage on Thomas but with Thomas' ability to score in buckets aggressively potentially presenting issues for Kelly, who doesn't possess great lateral quickness. Unless this happens to be one of the rare off nights when Thomas' stroke isn't falling, pending the defensive game of Kelly's season, it seems all but certain Thomas will make his impact known. How much Thomas respectively is able to curtail Kelly, who's averaging 11.8 points per game and 5.2 rebounds per, remains harder to forecast.

To many outsiders, Duke's Mason Plumlee feels like he's going on his 18th year in Durham; they're not entirely wrong. Plumlee is one of the rare breed that grades out favorably with NBA scouts but even in the era of one-and-done's elected to stay in college for four years before pursuing his opportunities at the professional ranks. After recording 12 double-doubles a year ago for the Devils, Plumlee is averaging one a game this year including a career high 19.7 points per game on the young season. Tasked with minimizing the damage will likely be Evan Ravenel, who actually isn't a stranger to Plumlee. 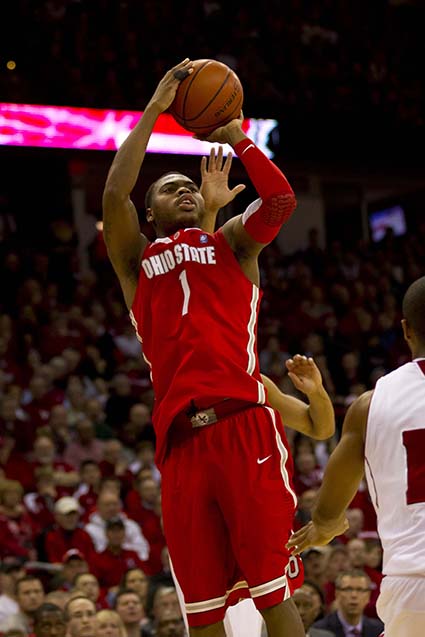 Evan Ravenel was part of a group of Boston College Eagles who held Mason Plumlee to 2-for-10 from the field in 2010.

As a freshman at Boston College in 2010, Ravenel went to Cameron Indoor for the first time and saw 15 minutes of action as part of a group of Eagles who held Plumlee to 2-for-10 from the field that afternoon. He himself finished with but four points, but even as a senior he's not expected to contribute much in the way of offense beyond monitoring the glass for errant ricochets. Plumlee's evolving mid-range game and combination of size and athleticism when finishing around the basket should easily make this the combination of Ravenel and former McDonald's All-American center Amir Williams' toughest challenge to date.

Complicating the task is how uneven the two Buckeye bigs have played in the early goings on the season. While they've picked it up as of late (Ravenel in particular during the last two contests), they'll have to be fully engaged as the caliber of Duke on the court at all times will limit the Buckeyes' flexibility to get away with double teams.

Deshaun Thomas went for 18 and 5 a year ago against Duke – and now he's an even better scorer.

Also worth noting is that Duke's 2012 bench isn't quite as deep as Coach K.'s teams in recent years. Guard Tyler Thornton (who started in Duke's 75-68 victory over defending national champions Kentucky but was largely ineffective) is certain to see minutes, and junior forward Josh Hairston is the next man off the bench. Alex Murphy (I'd buy that for a dollar) could see a minute or two and and talented true freshman Amile Jefferson may get a courtesy check in as well, but neither have played meaningful roles as of yet. In terms of Duke's rotations this season? Think to most of Thad Matta's in the last several years prior to this one.

If Ohio State finds themselves in a situation where they have to outgun the Blue Devils, the Buckeyes brass will justifiably have reason for concern. While this Buckeye team can play efficient offensive basketball, they have no sure fire second scoring option as of yet. Aaron Craft could be that player and Smith Jr. has certainly shown a late last season-carrying-into-this-one proclivity to get his own shot, but the sample size is still too small to bank on that consistently and with too many question marks surrounding sometimes starter LaQuinton Ross, it's going to continue being an adventure going into games likely until conference play. The Buckeyes should keep this one close, but given the caliber of the opposition, their experience to point, and the hostile road atmosphere (the Dukies haven't lost a Cameron Indoor non-conference game in a school record 96 straight tries), it'd be naive to expect an A-B repeat of what happened in 2011 in Value City Arena.