Pro combat has come to college basketball in the most pro combat way yet. To honor the troops, Ohio State will be wearing the above uniforms in this Friday night's clash with Marquette aboard the USS Yorktown. The aircraft carrier is docked in Mount Pleasant, South Carolina, just outside Charleston. The game will benefit the Navy-Marine Corps Relief Society and The Wounded Warrior Project while also contributing to The Congressional Medal of Honor Society.

In case you had any doubts about just how much America Ohio State can handle, the answer is infinite. Let's roll, you guys. U-S-A U-S-A U-S-A. 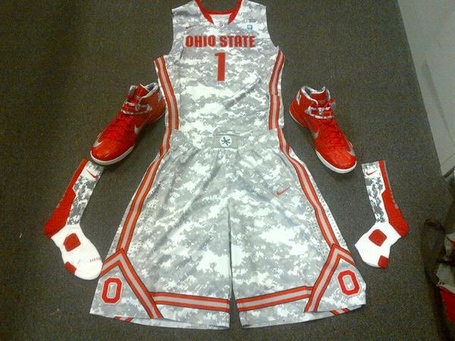