Recruiting season is the best/worst. We love the influx of information as well as the rat race to try and shore up the foundations of the future of our favorite football programs. But seemingly every day there's minutiae disguised as game changers, and other times really important nuggets get missed in the sheer overflow of new data we get day in day out from the Internet. But let's try and see if it's even possible to sort the signal from the noise anyways, shall we?

Did 2013 JUCO LB Tommy Sanders commit (or try to commit perhaps) to the Buckeyes Wednesday? The rumor had been that Sanders was going to announce where he'd be playing his major college ball on Wednesday...until he wasn't. But then he was maybe going to? Still, Wednesday seemingly came and went without any hubbub or big time announcements. But those crafty with scouring Twitter might've come across the following:

Congratulations to Tommy Sanders! Your accomplishments paid off. Good Luck at Ohio State next year! 💜🐻🏈

So who exactly is Whitney Amaro? Upon further review, it looks as though she was Sanders' tutor at Butler Community College this past semester. So did she spill the beans on where Sanders will be spending his remaining eligibility?

That's where it gets tricky. Sanders' 247Sports profile (and really all other information out there) doesn't make it clear that he has a committable offer, much less one at all from the Buckeyes. We know Sanders has been recruited by Luke Fickell and even was part of the core group that made official visits to campus this past weekend (which resulted in the commitments of Gareon Conley and Donovan Munger), but perhaps he's an insurance policy for the likes of Trey Johnson and/or Christopher Worley?

With Ohio State's scholarship math (they have to end up at 82 come August and can sign no more than 28, but more realistically will be limited to somewhere between 22-25 unless they can get just the right guys to merit more ethically gray practices), it's not at all inconceivable to see a situation where Sanders' commitment is honored should a few more of the previously mentioned guys say "thanks, but no thanks." But then again, maybe this is a glimpse of things to come. Stay tuned.

We mentioned 2013 S/LB Christopher Worley just above, and the potential next member of the once booming Glenville pipeline to Ohio State actually got some face time with Ohio State co-defensive coordinator ($) and secondary coach Everett Withers on Wednesday. Withers stopped by Glenville to meet with Worley and Ted Ginn Sr. It had long been thought that Worley was on the cusp of pulling the trigger on an Ohio State commitment weeks back, but rumors of academic issues slowed that. It remains to be seen if/when Worley will make his decision, but you have to think the Buckeyes are as well positioned as anyone.

Shifting to the more distant future, 2014 OLB Kyle Berger from Cleveland's St Ignatius announced on Twitter Wednesday his plans for a visit to Columbus in early 2013: 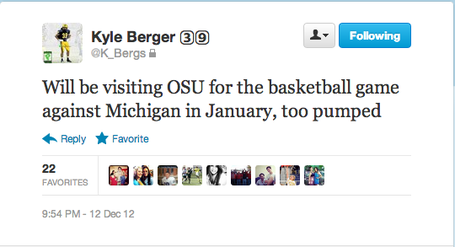 Berger doesn't factor into the 247Composite rating that's the gold standard around these parts (and in the industry, really) due to a lack of evaluations from the major services, but is considering Cincinnati, Illinois, Michigan State, and West Virginia in addition to the Buckeyes.

And speaking of the class of 2014, Manalapan (N.J.) junior WR Saeed Blacknall (4-star in the one major recruiting service he's been evaluated by) saw Urban Meyer at his high school Tuesday ($) meeting with his coaches, likely in an information gathering mission (plus in essence to make his presence known to Blacknall, whom he can't meet with per NCAA regulations). It's still likely that Meyer and the Buckeyes are interested if he'd go as far as to meet with Blacknall's coaches.