Out of all the episodes of Seinfeld, one episode ranks as my all-time favorite. "The Strike", which popularized the idea of Festivus, The Airing Of Grievances, and The Feats Of Strength make that episode stand out more than any other in the series. Accordingly, I conduct my own "Airing of Grievances", particularly with respect to college football's future post season.

Every beginning of December, I must air my grievances with regards to the lack of a true playoff system. Oh yes, I know, a 4-team playoff will begin after the 2014 season, and I am happy for this small step towards progress.

Let me ask any of you – do any of you truly believe a 4-team playoff will make everything perfect? Do any of believe this will truly solve all of the challenges associated with finding a true college football national champion?

The solution, I believe, is very simple. Why not take every conference champion, and give them an automatic shot at the title?

And to spice it up? How about five at-large berths, for teams who did not win their conference, but are probably even more deserving than some of the lesser conferences?

Just hear me out on this. For years, a traditional argument against a playoff is that it would cheapen the regular season. Valid point.

But, if a team knew that it would be eligible to play in the playoff tournament by winning its conference, wouldn't that spice up every conference contest? Wouldn't that keep the interest in the regular season high?

Another argument against a playoff like this is that it would be too stacked towards the power conferences, a la the SEC, Big Ten, Pac-12, etc.

But, if every conference champion received an automatic berth, wouldn't that be fair to the smaller conferences? The Sun Belt, the MAC, the Mountain West...no more complaints about unfair access, like the current BCS (and very likely the forthcoming four team playoff model).

For those teams who played a tough schedule, but did not win their conference? The possibility of an at-large berth. How would those be determined? Strength of schedule. That goes back to the first argument of making every regular season count. Do you think teams would beef up those schedules, thinking that it could help to play quality opponents in non-conference play, versus the traditional creampuff approach most teams currently take?

Below is a rudimentary idea as to how this could work: 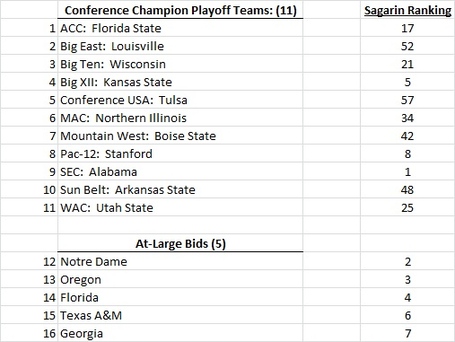 You may have noticed I placed the Sagarin Ratings next to the team. I have never met or spoken to Mr. Sagarin, and I am sure there are other computer rankings that could be incorporated into this system. For the ease of use, I included them for this little exercise. 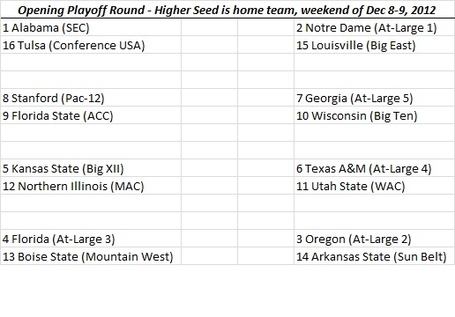 Now be honest z- who wouldn't want to watch every one of these games this weekend? Who wouldn't be curious to see if a great upset could occur, like maybe Northern Illinois defeating Kansas State, or Utah State taking out Texas A&M? How about Boise State having to go down to The Swamp to take on the Florida Gators? How good of a game would Stanford and Florida State be?

Would Alabama throttle Tulsa? Probably. Same for Oregon with Arkansas State...Oh yeah, I forgot that they played earlier in the season. Maybe Arkansas State's Gus Malzahn would have figured them out by now.

My point is, instead of voting on this, instead of arbitrary decisions as to how many tickets this team could sell, this would settle the championship on the field. Isn't that what all true competitors truly yearn for in this game?

Like I wrote up above, it's my annual Airing Of Grievances. Will it happen? No, not for the foreseeable future. The 4-team playoff will have to cut it.

Hey, if a man can wake up, with the possibilities of a unicorn lair in North Korea, why not dream of a 16-team playoff?