Sunday brunch: Chris Petersen to Wisconsin?, plus a check in on Ohio State football recruiting

A cavalcade of whimsical happenings in and around Ohio State athletics – plus cheaper and with better service than the chicken and waffles and Bloody Mary's standard you take all your old buddies from college to when they come to visit.

Share All sharing options for: Sunday brunch: Chris Petersen to Wisconsin?, plus a check in on Ohio State football recruiting

No, that fatigue and throbbing headache isn't residual exhaustion from folks discrediting Manti Te'o's senior year or others trying to claim Johnny Manzel has secret lingering legal issues which makes him an undeserving sham winner (buh buh buh...if you just ignore the Wisconsin and the scUM games, that Braxton fella...); that's probably just your hangover. You shouldn't have had that fifth Dewar's and ginger at the open bar at the company holiday party last night.

But, because the world doesn't stop turning just because your central nervous system is busy reminding you to never, ever, ever do that to yourself ever again, let's take a quick crash course around what you might have missed in the last couple days, shall we?

Elephant in the room, (or at least the Big Ten athletic director's lounge) effectively has to be will or won't Boise State's Chris Petersen actually interview with Wisconsin this coming Monday. Murmurs broke out not long after the job leaked (from people that have their ears to the Madison football season no less; we're talking the Wisconsin State Journal here) that Petersen was on Bucky Badger's shortlist, but those seemed to be quickly, summarily dismissed. Then again, the two folks doing the repudiation were Joe Schad and Matt Hayes (though Hayes in particular, while obviously his opinion pieces and some of the angels he's elected to take are shock scribe level head scratch worthy, I've never heard anyone in the industry dismiss his non-Urban Meyer related journalistic qualities) so maybe that means we should give them credence?

The following in particular set the social media/blogosphere scenes alike on fire when it crossed through the tubes Friday afternoon:

All kidding aside, there are legitimately connected folks at all levels, from the newsroom floor of the biggest pantheon's of sports journalism in this country to the smallest Blogspot blogs with just a half dozen articles to their credit. Good information is just that; in today's world, the challenge is obviously sifting through the noise to identify the signal.

Where it gets more difficult is Petersen's history. He's been leaked essentially to every medium-to-high grade head coaching opening of the last 3 off-seasons. The only job we know definitively he actually interviewed for, however, was Stanford's after Jim Harbaugh left. Even then, he returned back to Boise State and gave them a list of conditional qualifiers for his return to his boss (they allegedly included stadium expansion and improvement to the facilities). After the Boise athletic leadership agreed to facilitate those (plus give him a well deserved raise), Petersen told the Cardinal thanks but no thanks.

We don't have any other evidence Petersen's talked in any formal capacity with anyone since, contrary to what some fly-by-night Arkansas blog no one's ever heard of was claiming. Where it gets interesting I would suppose is the nature of the relationship Wisconsin AD (and interim head coach for the Rose Bowl) Barry Alvarez has with Petersen. It's not out of the realm of possibilities that this interview is just perfunctory on both ends and Petersen's humoring Alvarez in an attempt to jump start Wisconsin's search.

On the other hand, with Petersen's son's health problems reportedly behind them (which was long said to be the reason Petersen wouldn't consider any third party challenges beyond repeating the magic with Boise), maybe a relatively lower-risk-higher-reward gig like Wisconsin's would be the way to go. It wouldn't be the potential nightmare complete rebuilding job many of the higher profile opportunities linked to Petersen would've been.

I imagine should Chip Kelly ever decide he's bored and done with Oregon, that would be as perfect of an out as Petersen will ever get...but Wisconsin, if the interest is tangible and realized on both sides, wouldn't be far behind.

If you weren't aware, Urban Meyer and company are in the middle of one of the biggest recruiting weekends he's had since coming to Ohio State. It started off sublimely enough, with former Michigan commit Gareon Conley committing (and said to be for keeps) to the Buckeyes. Then a phalanx of verbally committed future Buckeyes (along with some prospective ones) took in Ohio State's celebration of perfection, honoring the 12-0 2012 team at St. John Arena. Looked like they were getting this whole "being a Buckeye" thing down (and fast): 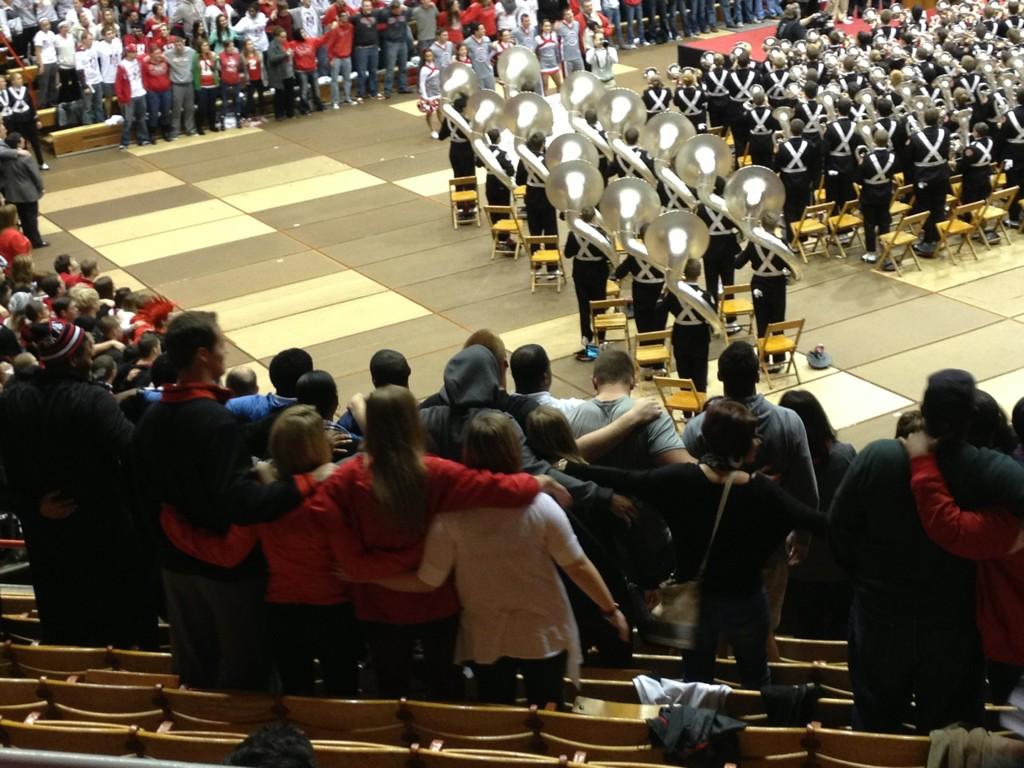 But how else has the weekend been going for those in attendance?

Wont be satisfied til we get Mike Mitchell to commit #letsshowhimlove

A source close to Ohio State feels good about Mike Mitchell and how Mitchell feels about OSU. Mitchell will let people know when he is ready

It's got to be hard not to like the sound of that that if you're an Ohio State fan.

Finally, we call it a morning/early afternoon/whatevscetera by taking a quick peak at an image I for one never thought I'd be seeing: 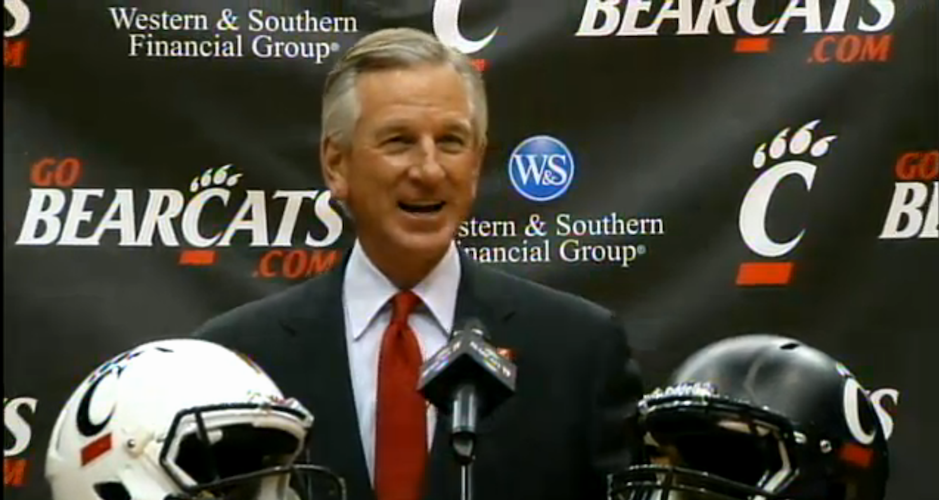 And yet, inexplicably Tommy Tuberville has departed a bowl eligible Big 12 gig (albeit one in Lubbock, Texas) in Texas Tech for one in the floundering Big East soon to lack automatic qualification for what we know as BCS bowls now in Cincinnati.

On the plus, that means that neither Kerry Coombs, Ed Warinner, nor Luke Fickell are likely to be going anywhere anytime soon...at least until next offseason.

Whether Tuberville can recruit Ohio remains as open to speculation as any. He doesn't have any ties to the area and is now bordering on carpet bagger status as one can get. Then again, if Todd Graham can go into a kid's living room and sell their parents in earnest on commitment, I guess anything's possible.

Ohio State ends their non-conference slate in 2014 against the Bearcats in Columbus. Might be a good time to paste this all over that group of Buckeyes' lockers then.