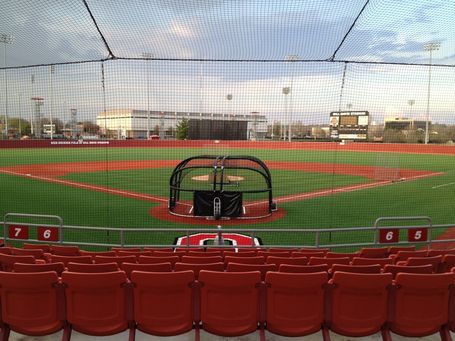 The timing of the debut of Land-Grant Holy Land fits nicely in respect to the baseball Buckeyes. As Ohio State heads off to Champaign-Urbana, this weekend's series with the Illini commences the second-half of the Big Ten slate for the Buckeyes (21-16, 6-6).

As we break our teeth, here's a look at where the Bucks are, have been, and what to expect going forward, as Ohio State coach Greg Beals' squad looks to break-even and work their way back into title contention.

Beaten and bruised but staying afloat

By quick glance, ledgers of 21-16 and 6-6 are hardly awe-inspiring. In fact, with the tradition and expectations of Ohio State, they're unacceptable. The coaches know this, the players know this, I know this, and hopefully you know this.

But, it's not all gloom and doom.

While Ohio State sits tied for fifth in the conference with Indiana and just one-half game clear of making the six-team Big Ten Tournament field, the Buckeyes find themselves in an opportune position.

Through the first two months, the slate Ohio State is five-up against has been the 36th-toughest in the nation. With three more on deck this weekend, Ohio State has already played 18 games against RPI top-100 teams. Though the Bucks have limped to a 6-12 mark against said teams, against those with RPIs north of 100, the Buckeyes are 15-4. That 78.9% winning rate is comforting as after Illinois, whose RPI is currently 71, the best RPI of the remaining seven teams that the Buckeyes will face over the next 18 games is 132.

Going from the big picture to the B1G picture, the first-half of conference play has been as grueling of a four-week stretch that any Big Ten teams has ventured in recent memory.

The first weekend featured Ohio State hosting Purdue. The Boilermakers returned to West Lafayette winners of two-of-three, but Ohio State salvaged the series with a Sunday victory against the nationally-ranked team -- a Purdue side that features the nation's second-best record at 29-5 and is as good of a Big Ten team in the last decade entering today 10-2 after back-to-back sweeps.

For week two, Ohio State traveled up to East Lansing to tangle with the reigning co-champions and coaches' preseason pick. Ohio State received a stellar Friday start from Jaron Long to win game one against Michigan State (24-12, 5-4), 1-0. This would become a trend, losing game two 2-1 prior to the wheels falling off in a 10-5 loss in the rubber match.

After playing the top-two preseason picks in the league, the schedule would make it three-for-three as Minnesota (22-17, 6-3) rolled into Columbus. Ohio State put together its finest performance of the weekend in sweeping the Golden Gophers.

That performance did not exactly carry over as the Bucks continued a 10-game homestand by hosting Nebraska (25-13, 7-5). I'm sure you can guess where Nebraska was picked preseason (hint: fourth). Ohio State won the lid-lifter against Nebraska 10-2, as Long paired a complete game victory against the Spartans with one against the Huskers. He only went eight strong against Minnesota. Unfortunately, the series provided more deja vu than Long's performance. OSU fell in game two by a run, 5-4, before the being battered 17-9 in the capper.

And so we have arrived at the fifth series, and Illinois (20-16, 3-6), of course picked sixth in the preseason (Ohio State was the fifth-place selection). The Buckeyes will have their chance to make the climb up the ladder as they face three of the bottom four teams over the next four weeks while those ahead start squaring off against each other. This weekend sees Nebraska host Purdue and Michigan State welcome Minnesota.

For any upward march to begin, they will need to start by taking this weekend's series at Illinois. Here's a preview of the crucial match-up:

For OSU to get back in the title hunt, they need two wins, with a sweep ideal heading into the softer four-week stretch. Nothing appears to be in the way of Purdue and trying to overcome a four-game deficit with 12 to play would be a herculean task for the Bucks. What is more attainable would be a second-place finish, with the two-seed in the Big Ten Tournament providing a first-round bye. Ohio State will hold any tiebreaker over Minnesota, the current second-place team, from the head-to-head advantage OSU gained.

But two wins will simply not be handed to the Buckeyes. Illinois is fighting to get back into the tournament picture as well and has an opportune chance in hosting OSU (who they trail by 1.5 games).

When Ohio State is in the field, the cliche "something has to give" can go out the window. Illinois heads into the series fourth in the 11-team conference in hitting while OSU is eighth in opponents average. Dan Hartleb's lineup is solid from top-to-bottom and will test OSU's pitching in being able to consistently hit, hit with some pop, as well as run the bases well.

The pitching for Ohio State will need to return to the level displayed during the Minnesota series. Though the OSU pen has been bullish and can pitch effectively three or four innings, when King and Kuchno go six innings, OSU fares well. In fact, Ohio State is 17-0 when leading after seven innings.

Another barometer for OSU success are marks of 14-2 when out-hitting the opposition and 17-7 when scoring first. For those to happen, the coaching staff is hoping a pair of veteran Bucks snap out of slumps. From March 18 to April 18, junior second baseman Ryan Cypret's average has fallen from .333 to .252. Coinciding with OSU's four-game losing streak, Hallberg, the top run-producer has gone three-for-17.

Getting those two, who have been OSU's two and three-hole hitters for the majority of the season, would be timely as the Buckeyes are starting to see their spark-plugs are beginning to buzz. Junior shortstop Kirby Pellant has inversely performed to the way his twin-killing counterpart has. Since March 18 to April 18 Pellant raised his average to .230 from .192. Pellant is second in the Big Ten with 20 stolen bases in 23 attempts providing Ohio State with a base-running and run-scoring force. The same for sophomore outfielder Tim Wetzel. Over the same month, as Wetzel replaced Pellant as the OSU leadoff hitter, the native of Mayfield, Ohio has increased his average from .217 to .279. As Cypret struggles, Pellant could move back towards the top of the lineup where he and Wetzel can set the table for Hallberg, Dezse and freshman outfielder Pat Porter .290/.383/.391.

Ideally Ohio State will start clicking on all cylinders. As the back-end of the conference slate eases up, that may now happen.