Ohio State Spring Game 2012: Winception -- We Have To Go Deeper

Share All sharing options for: Ohio State Spring Game 2012: Winception -- We Have To Go Deeper

After 20-some odd hours to digest to proceedings of Saturday afternoon (and the last thing resembling bonafide football until Urban Meyer's Friday Night Lights in the 'Shoe this July), it's time to take a deeper look at how things unfolded. We start with the pertinent stats from the game: 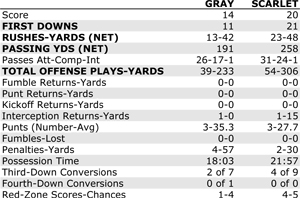 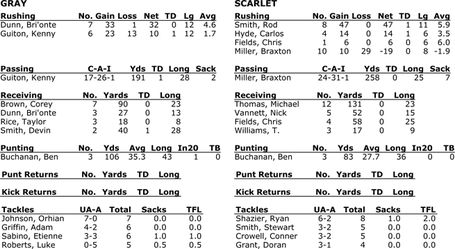 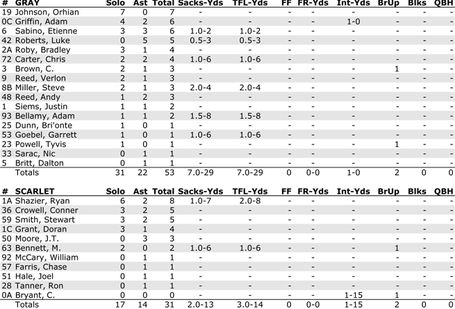 As previously mentioned, Michael Thomas had himself a hell of an afternoon. Looking particularly Terry Glenn-ish all the way down to the number, it's hard not to get excited for the possibilities of a Philly Brown, Jordan Hall, Michael Thomas, Devin Smith, and Jake Stoneburner vertical threat. The only lingering doubt is whether these players have been ostensibly padding their stats and appearing superficially better than they are by going against a relatively substandard (for Ohio State's impossibly high expectations) and particularly thin defensive secondary.

Ohio State will have no problem moving the ball on the ground, and that's precisely why we saw them practice throwing the ball at a roughly 3-to-1 clip. Coach Meyer said after the game rather matter-of-factly that if "we aren't balanced, we're not going to win football games." We know Ohio State can run; what we don't know is how effective Braxton Miller and co. can be when the opposite jerseys read Cal and Michigan State instead of being adorned with Columbus bicentennial patches.

Adam Griffin's playing his way into the two-deep has been a pleasant surprise, to say the least. While some felt Griffin's scholarship was ever so slightly nepotistic, at least for a Saturday, #9 looked every bit the part. With plenty of question marks still lingering about the consistency and potential reliability of Bradley Roby and particularly Travis Howard, every additional viable option for Meyer and Kerry Coombs (inexplicably more intense than even the Vrabro himself) is a god send at this point.

We know what we have in Ryan Shazier; even as as sophomore, particularly with the added bulk, Shazier's firmly established himself as one of the premiere defenders on this team. Other than the gamma radiation created John Simon, Shazier should be the Bucks' best playmaker on the defense this fall. Seeing Steve Miller, Chris Carter, Adam Bellamy, Michael Bennett and Garrett Goebel all finish with sacks to their name only further makes Gerry DiNardo's assertion that the d-line needs further development and/or or was the weakest part of the defense (the latter came from a television appearance on the Big Ten Network) all the more laughable. If anything, the absurd depth amongst the front four will make a shaky, thin secondary all the better for it.

Special teams shouldn't be a concern. Drew Basil kicked hurt and still managed to hit 4 of his 7 field goal attempts (in a mini-game scene straight of "Tin Cup" in which play was stopped and Basil kept attempting kick after kick after kick after kick) and despite a gaudy shank, Ben Buchanan should be reliable if he can manage to not grow complacent. Without another viable punter to push him and keep him honest, it'll be up to Buchanan to continue growing as a player.

Perhaps the one area still a virtual question mark is punt and kick returns. Ohio State was abysmal in the department two seasons ago and despite knowing that Devin Smith will likely be the guy in those scenarios, it's tough to say what to expect. Since every punt and kickoff seemingly resulted in little on Saturday, it's realistic to think we won't have a real pulse on what Ohio State has in the department until actual game conditions role around.