As football fans, we all want our team's out of conference schedules to be chock-full of interesting, challenging games. After all, nobody starts a season on NCAA2013 and schedules more than one "cupcake" (and that cupcake is only there so you can try to score 100 points). Actual college football scheduling is more of an art than a science though, as matchups are set many years in advance. ADs have to juggle the desire to face top flight competition with needs for certain number of home games and the pressure to play in state institutions against the quality of their own team.

We've been lucky that Ohio State has attempted to schedule at least one marquee "name" each season. The Buckeyes kick off a home and home against Cal this year, start a 2 year arrangement with Virginia Tech in 2015, and a 2 year deal with Oklahoma after that in 2017. Ohio State is also slated to face North Carolina twice, Navy (in Baltimore), and Georgia in 2020 and 2021. Other schools, like Wisconsin, have traditionally avoided playing power teams, choosing to save their energy for conference play. Other teams play multiple "name" teams in a season, like LSU.

I personally think a good (and realistic) schedule would involve playing one bigger name school (somebody who is going to win at least 9 games), a feisty mid-major or decent BCS conference school, and then two easy wins, with at least one coming from an in-state school. With that idea in mind, here are some schools that I personally think would be fun to see the Buckeyes play:

-Washington State Don't even try to pretend that the Cougars aren't going to be your second favorite team this season. With Mike Leach on the sidelines, the Cougars may not necessarily always be good, but they will always be interesting. It will likely take a few years before Leach can upgrade the personnel enough to compete for Pad 12 titles, but WSU's Air Raid offense will always make compelling television. The Big 10 and Pac 12 have agreed to schedule more games between each other, so we may actually get to see this game happen in a few years. OSU won the last meeting between these two schools, beating the 11th ranked Cougars, 25-7 in 2002.

-Appalachian State If we're going to occasionally host an D1AA FCS Team, we might as well host an interesting one right? Appy State is one of the stronger teams in the FCS, and perhaps the most beloved non-Buckeye school in Columbus. A "better than Michigan" bowl would certainly give a little buzz to a normally boring cupcake game. If they manage to win, we might as well extend a Big 10 invitation.

-BYU Speaking of western pass-happy teams, BYU is another school with a solid coach who could give the Bucks a good test. It remains to be seen how successful BYU will be while playing an ambitious Independent schedule, but the Stormin' Mormons have traditionally been a solid bowl team. There have been rumblings that OSU and BYU have discussed a multiple season arrangement, where games would be played in Columbus and also at a neutral site (The JerryDome perhaps?). OSU last played BYU in the 1993 Holiday Bowl, where the Bucks were victorious, 28-21.

Arizona State ASU has struggled a little recently, but with an enrollment roughly the size of Belgium, they can't be down forever. ASU has shown an interest in scheduling a few name teams, making a BroDown (Brocalypse? Bromageddon?) in the desert a possibility. These two squads last tangled in the classic 1997 Rose Bowl, where John Cooper miraculously won a bowl game, beating Jake Plummer's #2 ranked Sun Devils, 20-17.

-Oberlin Oberlin was the last in-state school to beat Ohio State, defeating the Buckeyes, 7-6, in 1921. It is time to finally avenge that defeat.

-West Virginia Both of the schools are a little more similar than perhaps their fans would like to admit. Columbus and Morgantown are only separated by 200 miles, they both employ high powered, exciting spread offenses, and both fanbases are known for their enthusiasm for furniture arson. While it remains to be seen how well WVU can sustain their success in the more demanding Big 12, a victory over the Mountaineers could potentially be a nice feather in OSU's cap. Ohio State last played WVU in 1998, beating the Mountaineers, 34-17 in Morgantown. 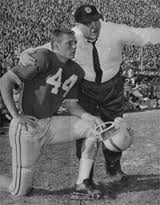 What do you think? Who would you like to see the Buckeyes schedule in the future, and what kind of strategy should they pursue?