That One Time They Had a Football Playoff And Nobody Died.

Share All sharing options for: That One Time They Had a Football Playoff And Nobody Died.

The most common rallying cries against a playoff system for major college football are it will compromise the regular season, and it will reward mediocrity. Is there a way to keep the regular season meaningful, preserve tradition and STILL have a fair playoff system? Would throwing the postseason floodgates open wreck havoc on the sport? Let's look at the way Ohio does their high school football, for a possible example.

Ohio football teams play a 10 game regular season, with typically 3-4 out of conference games, and 6-7 conference games. High schools are divided into 6 divisions, based on school size, and then 4 regions, based loosely on geography. A region will typically have around 30 teams, and the top 8 in each region make the playoffs (so 32 teams statewide, per division). Playoff seeding is determined by a computer ranking, giving points for strength of schedule (beating teams that win a lot of games, or teams from large schools).

While there may be some fairly mediocre playoff squads at the lower division levels, you typically need to be a pretty good team to make the playoffs. Depending on the region and your team's schedule strength, you ordinarily need to win at least 8 of those 10 games, and even then you shouldn't feel comfortable (my old high school plays in a particularly tough region, and missed the playoffs after going 9-1 last season). There are usually multiple 8-9 win teams who find themselves outside the postseason. 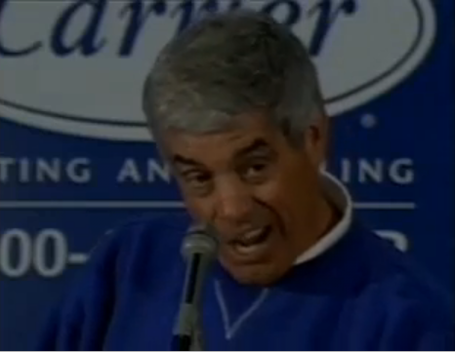 (wait, have we seriously had this many posts on the subject without a single Jim Mora jpeg? Playoffs? PLAYOFFS??? And I thought this was a sports blog)

I've never heard anybody complain that the Ohio high school football regular season was meaningless. Not from players, or coaches, fans, other reporters. Not even my former high school marching band cohorts. Teams have a strong incentive to play challenging, meaningful football games, since filling your schedule with tiny creampuffs completely removes your margin of error. 10 games still allows enough room to maintain traditional rivalries though. Newark and Zanesville, two towns east of Columbus, have been playing each other every season for nearly 100 years.

The most common rallying cries against a playoff system for major college football are it will compromise the regular season, and it will reward mediocrity. I think these are both pretty weak arguments. Under our current system, about half of all D1 college teams play in some sort of postseason bowl. The 6-6 B1G team who got fat on Sun Belters and MACtion, then had their stars align against Indiana and Minnesota gets to play a postseason game. THAT is rewarding mediocrity. With college basketball and professional football, only about a third of the teams qualify for the postseason. About half of the teams in the NBA and NHL make the postseason, although these are the sports that are commonly criticized for having meaningless regular seasons. (The fact that the Blue Jackets have only tasted the playoffs once despite more than 50% of the teams in the Western Conference qualifying each season just further underscores how completely shitty they've been. Nationwide Arena is a true factory of sadness). 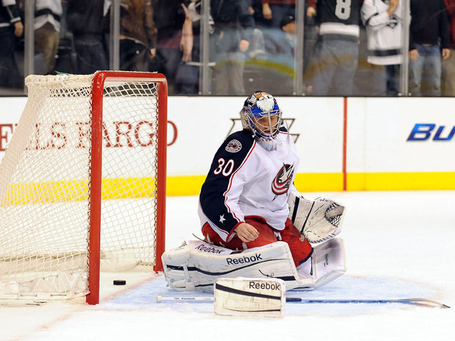 YOUR TEAM IS BAD AND YOU SHOULD FEEL BAD (Andrew D. Bernstein/NHLI via Getty Images)

We also shouldn't pretend that every game matters right now. The current system creates incentives for programs to avoid more than one difficult out of conference game. There are a lot of boring, throwaway football games at the start of the season. Credit Ohio State for trying to find a big fish each season, but we also have to sit through Ohio, Akron, UAB, San Jose State, Youngstown State, etc. each year. A proper playoff system gives teams a little breathing room to risk a loss, in the name of getting a playoff spot or preparing for the playoffs.

A good college basketball team is going to try and book multiple tough teams before conference play, even though they know they're likely going to drop a game or two. The advantages of getting that better seed (or giving them leeway in case something crazy happens in conference play) outweigh a few losses, and basketball fans are the better for it. A robust playoff system will give more cover to teams willing to take risks, and play challenging games out of conference.

We don't know the nuts and bolts of any real proposal yet, so it's difficult to get properly excited. It's entirely possible that the football suits will find a way to completely screw up what should be a sure thing. We've seen virtually every other level of football, from high school to D2 to the NFL, figure out some method of a playoff system (often more inclusive than most NCAA FBS proposals) without ruining the regular season or traditional rivalries. If they can't, then we'll go back to what we were doing before -- complaining over the internet. If a solution is reached, we'll have to find something else to bitch about.

I suggest the Blue Jackets.