The Cautionary Tale Of @Bdubstriviaguru

Share All sharing options for: The Cautionary Tale Of @Bdubstriviaguru

On the morning of Monday, April 30th, 2012, something out of the ordinary became apparent on the social media network Twitter. Multiple current Ohio State football players and even a few Ohio State football recruiting targets began to retweet the same motivational quotes from the same origin account. The quotes, perhaps uninterestingly enough, cited Muhammad Ali and read as follows: 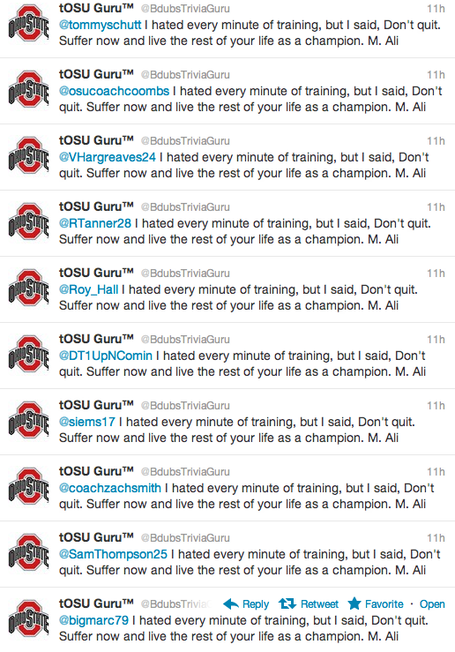 Over the course of 46 minutes, this particular individual at tweeted 129 current, former, and prospective student athletes with ties to The Ohio State University. Having seen the account cited by athletes previously, the twitter account affiliated with this site made an observation about the behavior, somewhat in jest, but also critical of the sort of such bizarre practice, even in the ever progressing in absurdity meat market like environment that comprises college athletic recruiting today:

Because there's nothing weird at all about spending time tweeting motivational quotes at 16-22 year olds: bit.ly/KpXFnx

A few relatively high follower count individuals in the college football branch of the internet retweeted it. Fans and commentators from a variety of backgrounds made observation of the oddities of such behavior, but after a half hour or so, most of the public facing controversy had subsided.

Except on the timeline of the individual responsible for the motivational tweets.

Eric Waugh, or @Bdubstriviaguru as he was known to Ohio State student athletes and fellow fans, had become somewhat under siege. Mostly made up of fans from rival schools, individuals began putting him on blast through the medium, calling him "creepy", "weird", and on to the sort of jawing you'd expect from one rival fan base to another after seeing someone so publicly engage in such irregular behavior.

Waugh himself went on the defensive, professing to be "misunderstood", and ultimately responding to the aforementioned along with a few other individuals who raised objections and spoke openly of notifying Ohio State compliance to make them aware of prospective tampering with recruits.

@BdubsTriviaGuru Pandering for RTs and committing potential NCAA violations by interacting with unsigned recruits is shameless. Do better.

@Landgrant33 No harm intended on my tweets man. I just try to motivate people. Thats all. Some people have me misunderstood.

@BdubsTriviaGuru Pandering for RTs and committing potential NCAA violations by interacting with unsigned recruits is shameless. Do better.

@Landgrant33 Totally understood now. My apologies. Thank you for pointing that out. Some might take it wrong.

@Landgrant33 But as for me. OSU has always been my team. I just try to be kind and encouraging. Never any harm meant in it. Just saying.

@Landgrant33 Some people just misunderstood me.

Waugh wasn't without his defenders, amongst them Ohio State football players Spencer Smith and Jake Russell :

@BdubsTriviaGuru i missed what was going on. but dont let the idiots get to you I like the tweets that you send.dont let them win Go Bucks!

@tjessberger @BdubsTriviaGuruHow is it any different than the hundreds and hundreds of people asking them for autographs? #getoffhisnuts

@BdubsTriviaGuru what's a hater's job? To hate. Let them do their job. Simple as that.

@BdubsTriviaGuru nothing wrong with trying to inspire our buckeyes brother. #buckeyenation has your back

In spite of a few pollyannaish defenders, those more cynical's worries of potential booster-like activity had reason for pause. As recently as two weeks prior, Waugh had been in Columbus for the Ohio State Spring Game, in which he met with current and prospective student athletes after the game at a public autograph signing/picture taking session in the stadium and at a few local sites later that afternoon and the next day.

The behavior, extreme even for garden-variety-super-fans, while certainly against the grain, didn't immediately seem like anything ill spirited. The day after the Spring Game, Waugh met early enrollee defensive back Tyvis Powell and backup quarterback Cardale Jones at a campus area High Street Chipotle which he later thanked them for:

The sad reality of the situation was much darker.

In 2007, then 27 year old Charles Eric Waugh, was arrested and later pleaded guilty to five counts of possession of matter portraying sexual performances by minors. The FBI office in Oklahoma City had tracked Waugh downloading images of boys younger than 16 engaged in sexual acts and coordinated with the bureau's Louisville office to pursue charges against Waugh. As part of the guilty plea (and due to his lack of a record), Waugh avoided jail time, was placed on probation, made to register as a sex offender for the next 20 years, and forced to complete a two year rehabilitation program that incarcerated offenders must undergo before release. Per the terms of his probation, he also had to comply with various regulations for sex offenders. Amongst them, KRS 17.546 stipulates:

Having violated seemingly all of these as well as actually interfaced with under 18 athletes as a result of those interactions with but a year to go on a five year probation, it's difficult to see the situation resolving favorably for Waugh.

The Kentucky State Police were notified of Waugh's behavior and detectives began a case on the situation immediately. After being notified by several parties that Waugh may be a person of interest for compliance reasons Monday afternoon, the university received a comprehensive documentation of Waugh's actions as well as the findings of which specific student athletes and recruits had been dialoguing with him.

Over the course of the next 48 hours, Waugh's twitter account was suspended on two different occasions. During the first, Waugh created a second account, @TOSUGuru. It seemed initially that another flood of motivational tweets coupled with twitter's block and report for spam functionality had resulted in an auto-suspension, but it remains unclear at this time if twitter or law enforcement had their hands in the matter.

After his account was restored Wednesday, both the @Bdubstriviaguru and @TOSUGuru accounts were suspended Thursday morning not long before The Ohio State University sent this mass text to all student athletes: 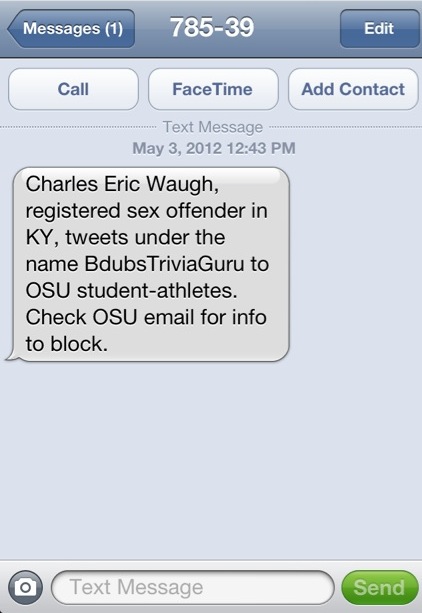 The accompanying student athlete sent e-mail was reported on by the student paper The Lantern Thursday evening and included the following:

"We strongly recommend that you take the steps (see links below) to block his access to your Twitter and Facebook accounts," Archie said in the email. "In addition, we've enclosed a photograph and a link to a news article regarding this individual. As a reminder, the individuals who you associate with on social networking sites (i.e., Twitter, Facebook) can have negative implications on your reputation and the university. Please remember to choose your ‘social media friends' carefully!"

The e-mail also included instructions on how to unfollow individuals on Facebook and block users on Twitter.

Waugh was also said to delete his Facebook account sometime Wednesday or Thursday evening, but the specifics of such activity was not confirmed at the time this article was published. His mother spoke to The Lantern in defense of her son:

"We're good Christian people. (Charles) is also a Christian boy," Charlene Waugh said. "He's been saved. He's been baptized. He's been on probation for four years and he hasn't had no problems or anything. This situation right here's the only thing we've had in our family."

The immediate visceral reaction to such happening makes it hard to find much empathy, even trying to put a bow on such an unimaginably challenging familial situation.

While it'd be incredibly easy to paint this as another episode of sidewalk Ohio State fans personifying the worst stereotypes of a single fan base, school, place, or region, the unthinkable truth likely lies far closer to that in the internet age, this kind of behavior happens far more than we even realize. Figures like major college football and college basketball players live their lives extremely publicly and are often more easily accessible than ever before.

Players often are coached up on the threat of lurking self interested boosters, street and traditional agents, as well as individuals in their circles of influence that could lead them towards making bad decisions. Perhaps it's time we start teaching them to be more wary of other such dangers.