This Is A Story About The Ohio State Victory Bell

Share All sharing options for: This Is A Story About The Ohio State Victory Bell

Ohio Stadium is the Sistine Chapel of our shared Buckeye football religion. On fall Saturdays, we'll dutifully turn in for services, and give the imposing structure a fair amount of reverence, even when the lights go off. Like many great cathedrals, our Horseshoe is graced with an imposing bell tower, tended to by an elite group to make sure that the news of the faithful's victories is sent far and wide. Football players are not allowed in the bell tower. Few media members and even fewer students have set foot inside either.

But I have. I used to ring that bell every Saturday.

The massive bell that hangs in the Horseshoe's southeast tower was a gift from the graduating classes of 1943, 1944, and 1954. Woody Hayes himself decreed that the bell should be solely managed by a campus service organization, a role that fell to Ohio State's chapter of Alpha Phi Omega, a national co-ed service fraternity. APO Buckeyes started ringing the bell after every home victory after the Buckeyes defeated the Cal Bears on October 2nd, 1954. Brothers ring the bell for 15 minutes following the win, with the exception of a Michigan victory, which is celebrated by 30 straight minutes of bell ringing (even if it was a road game). I joined APO in the fall of 2007, and had my first chance to ring shortly thereafter.

The first thing you notice when you try to ring the bell is that it's freakin' big. Weighing in at well over a ton (2,420 pounds, to be exact), you actually have to use a fair amount of muscle to yank the rope down far enough. The force from the rope going back up was more than enough to lift my 175 pound frame up into the air, and could easily send our smaller members flying about the tower if they weren't careful. APO members make sure to ring the bell in groups not just to share the experience with multiple brothers, but because yanking a 2,400 pound bell around for fifteen minutes is hard work, and you don't want to do it alone. 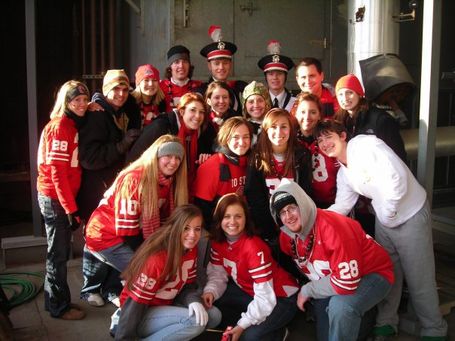 A group shot of APO, circa 2008, in the Ohio Stadium Bell tower.

The Victory Bell is also LOUD. APO recommends ringers to bring their own earplugs, and there is often a roll of paper towels in the tower that can be used as emergency noise stoppers. Once that rope has been pulled for the first time, it gets too loud for any kind of meaningful conversation, so if they aren't taking pictures, ringers have a moment to just soak up the experience, by either waiving to the crowds outside the tower, climbing up to a back window over the actual field, or by looking at the decorated walls, where senior APO brothers have carved their names at the end of their final seasons.

These bell trips were some of the highlights of my entire experience at Ohio State. I was a transfer to Ohio State, and I had a little trouble fitting in at first. I have one of the most common names (hello Brown.2800 email address!) at a school with 55,000 students. There may be dorm complexes at Ohio State with a population larger than my hometown of Granville. My experiences with APO, and by extension, the Victory Bell, helped alleviate my concerns about being just a number. The bell gave me a chance to experience the wonderful massive traditions (singing "Carmen Ohio" with 100,000 other crazies), but in a more manageable chunk (but with a dozen new friends in the tower). I suddenly had an important role in the Ohio State experience, and can say that I left my mark at the school. It's a pretty big mark actually, since carving your name with a screwdriver isn't nearly as easy as it looks: 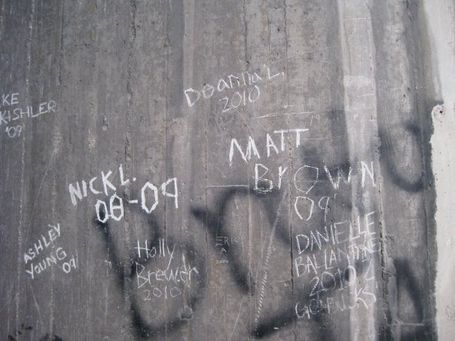 Yeah, yeah. I know it's huge. You try writing with a screwdriver.

Current APO President Chuck McKeever relished his first time ringing the bell as well. Even though McKeever hails from upstate NY, "both of my parents were Buckeye grads, so being a Buckeye fan wasn't really an option. My first game was the 2010 Miami Game, which had the benefit of being a major game...but school hadn't started yet, so the bell tower was still fairly empty".

He added, "ringing the bell is always gratifying, even if there are 20 other brothers in the tower with me. Having my first time with fewer people was awesome, since I got 3, 4 minutes of solo ringing with the crowd going absolutely crazy down below."

Access to the bell tower has changed a little bit over the years. When I transferred to Ohio State from American University in 2007 (and joined OSU's chapter), APO had maaaaybe 7 active members. It wasn't uncommon to not actually have enough active brothers to properly ring the bell (especially for the games against MAC nobodies before the school year started), so we were allowed to bring friends with us if we wanted. The chapter began to experience steady growth throughout the year, and bell tower was then restricted to active brothers, alumni, and pledges. Since Ohio State's APO chapter now is nearly 150 strong, bell tower access to strictly limited to active brothers, although graduating seniors can bring in siblings during graduation.

Other campus organizations have attempted to gain access to the bell tower, something that APO has vigorously opposed. Representatives from Ohio State's Student Life department made overtures in 2009-2010 to allow all graduating seniors to ring the bell (and then later, in a proposed compromise, to simply "tour" the bell tower). APO fought back, both for practical reasons (the bell tower is barely large enough for a dozen or so people to stand around, let alone cycle thousands of students), and for tradition. Current APO President Chuck McKeever suggests that APO may look at conferring honorary brotherhood for administration members (like, say, a school president, athletic director, or someone of that stature) as a way of guaranteeing the tradition.

"Woody Hayes wanted a service organization to be in charge of ringing the bell," adds current APO brother Torie van Dijk. "We've been in charge of the bell since 1954, and we'd lose a sense of tradition if just anybody could do it."

I'm certainly inclined to agree. Ohio State is an institution that takes tradition seriously. If TBDBITL decided to whip out saxophones and start dancing, there would be revolts. If Hang on Sloopy was replaced by the latest LMFAO song, the Dispatch website would be on fire. The Victory Bell is the same way. 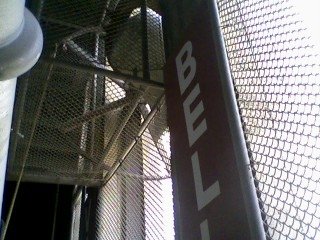 After the Buckeyes win, a crew of APO brothers will be in the tower, ringing in the victory, where everybody this side of Summit St can hear. It's what Woody would have wanted, and anybody who thinks differently would have to take it up with him. I'd be careful though, I bet the sonofabitch could still throw a mean right hook.