Share All sharing options for: Ohio State Football: The Summer of Trollgaze

Trollgaze (n) - A genre of music defined by its Tumblr success, Twitter divisiveness, and total inability to exist outside of the internet... At least that's how it's defined by Sarah Nicole Prickett of Fashion Magazine. She attributes the definition (and the genesis) of the phrase to Maura Johnston of The Village Voice. In this piece almost four months to the day earlier, Maura creates a thesis around the premise that some sort of music so disingenuous in its popularity that it can only exist within the viral confines of the internet fits into a term she felt as though she was conning for that particular article. The problem was, she'd been incepted.

You see, Maura is an avid user of the social media platform Twitter and she follows Andy Hutchins as well as a number of other folks who follow man-about-the-internet, Matt T1. Matt T. is in essence the living, breathing personification of a meme2. If you're around him long enough, you're not only sure to have a great time, you're also bound to learn an important (arguably repetitive) lesson about yourself and life in general. It would be impossible not to think that one of those individuals didn't retweet one of Matt's literal hundreds of #trollgaze or #trollgaze2k11/#trollgaze2k12 tweets and even less likely that in her sea of updates, one of those perhaps curiously caught her eye. But we're not here to argue agglutination punctuality3. John Glenn is a name virtually every American recognizes (and every Buckeye certainly should) but I'd imagine only a small number would know who Yuri Gagarin was if you were to ask them. It's not always about being first, contrary to what the internet has led us to believe.

"So what pray tell is trollgaze?", you might be asking. Trollgaze, which finds its nomenclatural origins in the musical genre witch house, is an attitude, practice, or action in which something is done specifically (and often times maliciously) with either the subtle or intentional desired outcome of trolling those on the receiving end of it. It's often used in a sports context, and a fitting Ohio State example would be "George Dohrmann let the trollgaze flow through his finger tips as he readied the non-starter article on 30 year old rigged small town college raffles". Or, while it's still arguably too recent to broach, LeBron James' narcissistic farewell to the state of Ohio would constitute quite the brazen act of trollgaze.

"And what the hell does this have to do with Ohio State?", you've undoubtedly asked yourself as both your patience and attention spans have reached their wits' end.

You see, in spite of a particularly trollgaze-y personal 2011, Ohio State is about to enter into college football's long standing trollgaze harvest. Each summer, during college football's deadest of dead periods, authors, fans, and schools alike begin to wage trollgaze warfare on one another (and ultimately, themselves). Media outlet pose (and to chagrin of no one, usually answer) absurd hypotheticals. Meaningless opinion polls are brow beat to oblivion. Players start to ride around on scooters and injure themselves and/or get DUIs on them, because f*** it, that's why. The long, harsh gaze of the trollgaze sun is upon us. It's time to hunker down, put on our deal with it sunglasses, and apply trollscreen hourly as appropriate.

We begin with ESPN's Mark Schlabach. Long known as a mid-grade trollgaze jedi4, a seemingly otherwise innocuous puff piece from Schlabach on what the Ohio State-Michigan rivalry means to Urbz kicks off with a subtle, yet swift kick to the collective crotch of the Ohio State fan base: 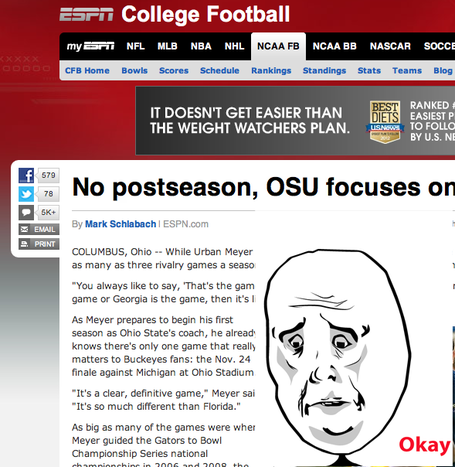 The unintentionally (and intentionally alike) trollgaze-y jabbing will be in high supply this fall and particularly this summer. Better to build up a callous to it now.

But like most things troll-ish in nature, there's still some choice resources to mine from within. Ohio State's Urban Meyer:

"You always like to say, 'That's the game,'" Meyer said. "But as soon as you say Tennessee is the game or Georgia is the game, then it's like, 'Well, LSU's not a game?' It was tough down there."

"It's a clear, definitive game," Meyer said. "It's so much different than Florida."

Brady Hoke, a rather adept master of the aforementioned art, gets in a few (admittedly tired at this point) "Ohio" jabs in his respective quotes, but the real troll gold comes courtesy of Ohio State fullback and likely captain-to-be Zach Boren:

"We want to win every game," Boren said. "It would be very satisfying for this group of seniors with everything we've been through to go out and go 12-0. That would be just as good as going to any bowl."

Going 12-0 without the ability to play for a Big Ten or national championship would be the ultimate troll job, not just to the teams defeated, the NCAA disciplinary committee, and the rest of college football, but perhaps equally if not more so to the school's base and players itself. Sorry, Gene. Yes, we would be mad.

Because the World Wide Leader has this whole process down to a science, we turn our attentions to an extra rare (we're talking a month earlier than even the prediction magazines) top 25 from ESPN's College Football Live. Supposedly the Top 25 takes into account votes from both the TV and internet sides' "experts", for whatever that's worth, but let's see what it brings to the table:

Lane Kiffin, troll black belt, sits with the number one team in the land, and given that offense, it might be hard to disagree. In the same right, given that secondary over a long enough time line (even two years removed from the weeping blood nightmare of Kififn's defensive backs' inaugural campaign in Los Angeles) and it becomes increasingly more difficult to see them running the gauntlet unscathed. LSU returns basically everyone so that's probably fine and even though the defending national champion Crimson Tide will be hit with a number of key losses, they'll probably reload in most if not all of those key positions.

So what about the Bucks? 20th? Too high, too low? In true troll poll fashion, it's almost impossible to tell. This team has every bit the potential to go 11-1 or 12-0, but more realistically feels like an 8-4 or 9-3 type team. Should any lingering trollgaze permeate through the veins of the team from last season's nightmare, and maybe all of the sudden 7-5 becomes a realistic worst case scenario. Given the hype and expectations of bringing in one of the two or three most accomplished coaches in the country, anything towards that bottom end of the spectrum record wise transcends trolling and very quickly starts to feel like an out and out crippling disappointment.

Shifting gears from polls to "get your hopes up" blurbs, the Orlando Sentinel can't quite stop calling Urban Meyer in the middle of the night, breathing heavily, and hanging up the phone. They list the 2012 Bucks as one of five teams to surprise in the coming season. Their reasoning is as such:

The Buckeyes return 16 starters including quarterback Braxton Miller, who should benefit greatly under Meyer's guidance. Their schedule features winnable games against the likes of Miami (Ohio), UCF, Cal, UAB, Indiana, Purdue and Illinois and with no possibility of a bowl game, there is always the potential that someone like Michigan State, Nebraska, Penn State, Wisconsin or Michigan could overlook Ohio State.

Hard to disagree with much of that but still. I can't well read something like that on May 8th coming off last season and not feel an awful lot like a cat being shown a laser pointer.

Finally, we end this crash course in trollology by looking at a prime example of the vaunted counter trollgaze technique. Jon Spencer of CentralOhio.com provides the A+++ would-troll-again gold standard for how you not only talk yourself into believing your team's viableness in the coming year, but you do so by patronizing your "doubters". A sample of the bitter herbs:

One tortured columnist, who recently called Meyer a "pathological coaching arson," would love to extinguish him from memory. Meyer was accused in the column of taking over as Ohio State football coach under false pretenses and leaving behind a "toxic, troubled program at UF."

Apparently putting down his cell phone long enough to wield a blow torch, Meyer then "set (the program) on fire," scorned scribe wrote, "in a desperate attempt to get a five-star wide receiver."

A little bitter are we?

Yup. While I enjoy a fine serving of self trolling from time to time, I'll spare us all any more from the remaining hundred some odd words of Florida straw men warfare and trollgaze UMAD-sterpiece theatre du jour. This particular technique is the literary equivalent of spending an entire date with your girlfriend of 7 months relentlessly bashing her ex-husband of 6 years. Game respects game, but, you have to choose your fictitious righteous indignation internet battles with far greater aplomb.

The offseason is long, and trollgaze hell is hot. Pick your battles but remember, better the troll devil you know.

1. Sadly Matt T. and Andy have since fallen out of each other's good graces and can no longer count one another in their respective internet Christmas eCard recipients. #Pray4MattTandTheHutchBro ↩

2. Redundant humor and a shit load of cats but ultimately you're better, happier, and wiser for it. ↩

3. Words given new definitions that are widely adopted enough very literally make that definition a new definition of the word. Yes, in a sense Alanis Morisette's "Ironic" misuses the term irony (more from a queen's English historical vantage), but written prose (particularly American) of the previous hundred years' consistent "misuse" of the "erroneous" definition (dare I say ironically?) in and of itself makes that a definition of the word. By doing just that with her own definition, Maura is making the word mean what she perceives it to mean, and with it clearly already being adopted by others, makes it just as valid as any other definition or interpretation. Bottom line, what does the entirety of this practice encompass? Some damn fine trollgaze-ing. ↩