A brief Euro 2012 aside: Apologies to Ireland. 'Twas a fine run, indeed.

The Buckeyes get mentioned specifically, in part for being free wheelin' free spenders, even in a less than grand economy. Amongst their impulse investments: a new scoreboard. The following artist's rendering depicts what the new scoreboard at Ohio Stadium might just look like this fall (***EXCLUSIVE*** MUST CREDIT LAND-GRANT HOLY LAND DOT COM): 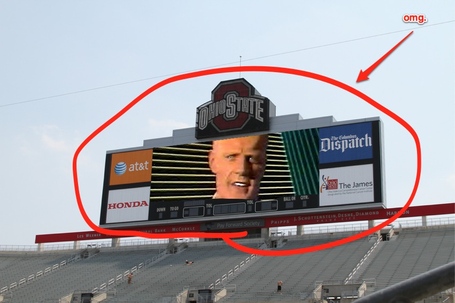 One more Max Headroom joke this week and we get our own computer animated 1980's Cinemax show.

Congrats to Class of 2013 defensive back Jayme Thompson on receiving an invite to participate in the exclusive Nike The Opening recruiting showcase/training camp.

FOUR PROPER SONNETS ABOUT SEC FOOTBALL - Every Day Should Be Saturday

Derek Dooley failure in the prose of Shakespeare. Please to enjoy.

Karma: a 4G provider that rewards users for sharing their data plan with strangers | The Verge

Simulating Dream Teams, because somebody on the Internet dared me. - Suss--