In honor of one of the best college basketball players ever to play at The Ohio State University, today's Beat The Clock is Sully heavy, to say the least (though, uh, not heavy Sully as he lost all the weight and what not).

Here's what the experts are saying:

Teams gauging Ohio State's Jared Sullinger believe he won't be selected before No. 20. Despite back problems, there's interest in 1st round.

Few are as dialed in as Wojnarowski. The kind of inside information he's privy to and then disseminates can literally impact how teams approach their draft boards. From the sound of what he's hearing, we should probably expect Sullinger to land between 20-28.

On whom Sullinger compares:

Falk's opinion, it was made clear, is that there was a built-in bias against Sullinger even before the red flags started waving. He bristled at the NBA's addiction to athleticism that is so often overhyped.

"Last year, a guy named Kevin Love led the NBA in rebounding," Falk said. "I don't think most people would consider him one of the great leapers in the game, but he only led the league in rebounding.

Falk also noted that another one of his clients who was knocked for his athleticism, Roy Hibbert, the 17th pick in the 2008 draft, is set to become a restricted free agent after an All-Star season with Indiana.

"When he signs a contract on July 1, I assure he will not be the 17th most highly compensated player in this draft class," Falk said. "And a lot of people made a bad mistake by overevaluating his lack of athleticism. He's very smart, he's highly skilled, and that's the way it is."

Of course the guy doing the talking, David Falk, happens to represent Sullinger as his agent. That being said he's been in and around the league for a long time and he does raises some fairly valid points.

As for the mock drafts:

Sullinger at 22 to Celtics RT @sam_amick: Update to my Mock Draft, including surprise pick at No. 10: bit.ly/L59ki5

ESPN.com mock also has, for now, Sullinger going 22 to Celtics.

And of course, Draft Express, who's Jonathan Givony has been quite the tour-de-force this draft cycle, has Sullinger going as follows: 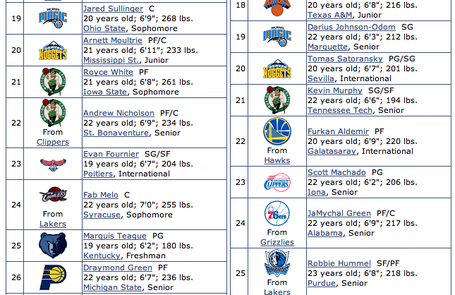 Will be interesting to see what this means for Sully.

So last but not least, what about William Buford?

The WB had a great career as a Buckeye helping Ohio State to a Final Four and etching his place in the pantheon of all-time basketball Bucks. But alas, a rough senior year and some less than impressive workouts mean him hearing his name would be a bit of a surprise Thursday evening. Of course it only takes one team...

The softer side of Sully.