This Is Why We Can Have Nice Things

Share All sharing options for: This Is Why We Can Have Nice Things

I got a lot of feedback on my previous story on the "not-so-exploited" major college football player. My friends who spent their Saturdays in the library, instead of tailgating, were incensed at the very idea that football players could be considered exploited. "They were given every possible privilege!", they cried to me via email. "They got the best scheduling, nicer dorms, AND all the girls! In the age of perpetual austerity and rising tuition, how can we even justify spending so much money on athletes, while cutting academic programs elsewhere?" A Medieval Studies grad student followed up with an emphatic, "A POX ON ALL THEIR HOUSES", but I suspect that's just because she's a Medieval Studies grad student, and thus facing certain unemployment.

I did a little poking around to see if they were on to something, but my suspicions were confirmed. It turns out that having a strong athletic program can actually help a university academically.

First, a quick story. Before I wizened up and transferred to The Ohio State University, I attended American University, in Washington D.C. In addition to being a sports fanatic, I was an insufferable political geek, and AU is renown for being one of the most politically active campuses in the country. It had a strong Political Science department, and was a fairly academically competitive place. Since the Nationals sucked, campus was only a Metro ride away from cheap baseball as well. On paper, it seemed like the perfect place for a guy like me. 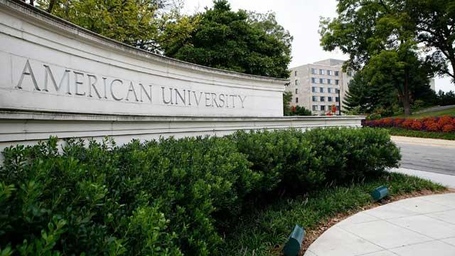 American U.: It's a real place. I swear! (Photo: Getty Images)

There was only one big problem: American was stupid expensive. Even Washingtonians clad in hipster glasses would brag that you probably hadn't heard of it. AU had no football team, no baseball team, and their basketball squad competed in the tiny Patriot League, one of the worst in all of college sports. With a smaller endowment, it struggled to advertise outside of the DC/NJ market, even though the academic product was good. I'd go back home to Columbus, apply for jobs, and have interviewers go "where the hell is American?". This was not helping make the case for borrowing all that money, so eventually I just transferred to Ohio State.

A funny thing happened my first year at OSU (2007). After a series of near-misses, AU finally broke through and won the Patriot League, propelling them to their first NCAA hoops tourney. They gave a strong Chris Lofton led-Tennessee squad a run for their money before losing, but announcers were suddenly talking about those scrappy upstarts from DC. This also let to media outlets discussing the actual American University. My boss realized that I came from a pretty strong Poli Sci program, and began to give me more challenging work, and AU reported their most academically talented freshman class the next year (and after they made the tourney again in 2009, they recruited an even more talented student body). Many of my former classmates at AU claimed that some of the good things happening at the school were because people actually knew what the hell American WAS, and that came from basketball.

Is there some truth to that? Several studies appear to think so. After the University of Florida won titles in football (ugh) and basketball (double ugh), they received over 25,000 applicants, which was an 8% over the previous year. After the Flutie miracle at Boston College, BC's applicant pool jumped 30% over the next two years. After Northwestern played in the 1996 Rose Bowl, they saw both a 30% jump in applicants, and a 20 point jump in average SAT scores. Both of the linked academic studies also point to other published articles that demonstrate positive links between athletic success and perceptions of the institution, incoming SAT/ACT scores, and perhaps most importantly for us, alumni donations.

For those of us who attended, or currently attend state universities, having robust private giving is critical, as counting on state matching funds in a down economy is risky. Baade and Sunberg wrote in Social Science Quarterly (1996) that alumni are between 45-55% more likely to donate to a school after a bowl appearance. More recent studies, such as an article published in the Journal of Sports Management in 2000, also indicate relationships between athletic success and alumni donations.

It's worth noting that sports success alone doesn't really make or break a school. No matter how many titles Alabama wins, it isn't going to turn itself into Yale on Nick Saban's recruiting alone (sorry ,PAWWWWWLLL). However, having access to a well known national brand and a plugged in donation network are huge assets for a university and things that those of us associated with Ohio State benefit greatly from. Everybody has heard of Ohio State. Part of that comes from the fact that we graduate a zillion students, and part of that obviously comes from our strong academic programs, but we're kidding ourselves if we don't recognize that a large part comes from our sports. Those three hour commercials for OSU on Saturdays can help convince kids they want to be a part of OSU, and help remind graduates to give money back to OSU.

Without that support, we'll struggle to raise the money needed for things like fancy new libraries, parking garages, or dorms. If planned and administered correctly, athletic excellence can help us have "nice things".

That may not be of any comfort to the soon-to-be-unemployed Medieval Studies major, but at least she'll be able to do her research from a comfy chair in a nice building.