Earlier we hit on the team specifics rankings making their way out of E3 2012 at the Los Angeles Convention Center. Now the platinum endowed behemoths of early college football video game leak wizardry bring us individual screen shots of many of the highest profile teams in this year's game. Remember: if we can't get mad about their on the field performances relative to our mostly out-of-touch-with-reality unrealistic expectations, we can certainly create faux controversies by chiding a third party video game entity for not giving them their just dues in the interim. 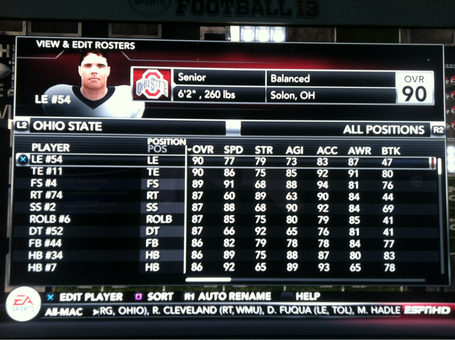 John Simon and Jake Stoneburner unsurprisingly get the respect this year as Ohio State's two highest rated players followed closely by... C.J. Barnett? I get that Barnett had flashes of brilliance last year, but his inconsistency at safety was maddening at times to watch. Also "free safety"? I know Christian Bryant played "star" predominately, which was a hybrid position under Jim Tressel, but Bryant remains 5'9 and generously 190 lbs; not the typical build of most major college strongs across the country. "Right tackle" Jack Mewhort checks in shortly there after (that 90 acceleration wasn't quite enough this past Saturday morning though evidently). "Strong safety" Christian Bryant, Etienne Sabino, the criminally underrated Johnathan Hankins, Zach Boren, Carlos "El Guapo" Hyde, and Jordan Hall round out the top tier of Ohio State talents in this year's version of the game.

The rest seem fairly in line (at least from a video game stand point), though there doesn't seem to be a ton of respect for Simon's motor (which remains one of the more consistent knocks you hear when folks compare him to SEC type lineman) though a 79 for his strength might need to be manually modified for more accurate realism.

Who seems overlooked? Who's the most under (or over) rated? And will you use the game as a coaster or some kind of utility to draw perfect circles after the fourth user quit or sixth unrealistic computer controlled team comeback, whichever comes first?