Share All sharing options for: Jack Mewhort As The Voice Of Reason: Beat The Clock, 06/07/2012

I've never been more proud to be a Buckeye. From Derby Hall: 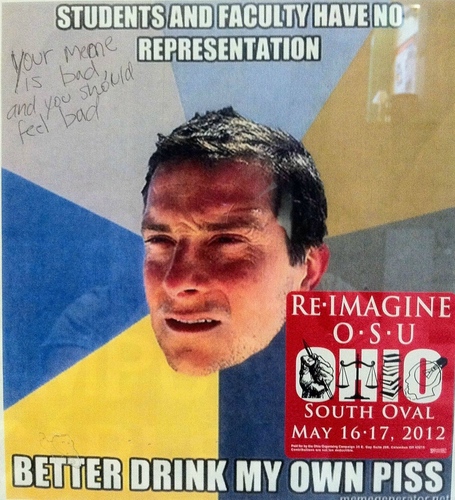 Warinner is No Walrus | Eleven Warriors

The air tastes so much sweeter when you have a competent offensive line coach capable of churning out NFL caliber offensive linemen.

Jack Mewhort comes across as the voice of reason:

Stoneburner: "What will you say?"

Mewhort: "You want to let him find out by himself?"

That or Jake Stoneburner is unbelievably committed to not snitching, no matter what.

No one land-grant institution should have all that power.

A stellar day at the NBA Draft combine for Jared Sullinger:

Jared Sullinger said he was measured at 6-9 with shoes. That's significant.

Sullinger was feared by many scouts (and fans alike) to be listed generously at 6'9" these past couple years. Despite the fact that he plays bigger than his height (in spite of a rather paltry vertical), just having extra inch, inch and a half could go a long way.

Speaking of going a long way:

Ohio State big man Jared Sullinger will workout for the #Blazers next week.

God speed on your journey to the house of the undying big men, Sully.

Learn all about it now. You'll be using it draw up plays in NCAA Football '14.