Big Ten, Pac 12 Cancel Scheduling Partnership (Before It Ever Even Happens)

Share All sharing options for: Big Ten, Pac 12 Cancel Scheduling Partnership (Before It Ever Even Happens) 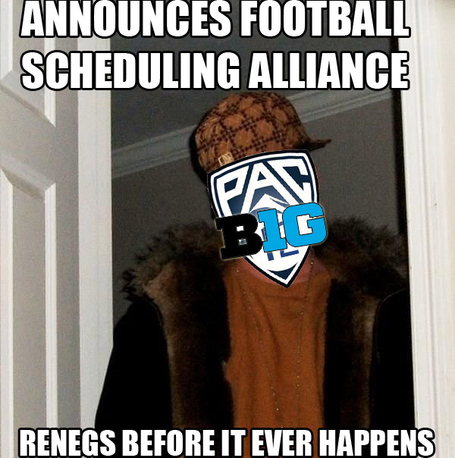 So much for that beautiful dream.
Despite having seemingly just announced an agreement between the Pac-12 and the Big Ten to begin regular non-conference football meetings from 2017-2020, the two conferences revealed today that they are scrapping that arrangement. Some felt as though given the realities of the new National Championship Series four-team playoff that eliminating or potentially moving away from such scheduling could be one of the by-products. Turns out those cynics were right. Big Ten commissioner Jim Delany addressed the situation in a statement:

"We are disappointed to announce today that the Big Ten/Pac-12 strategic collaboration announced jointly in December 2011 unfortunately will not be consummated,. We recently learned from Pac-12 commissioner Larry Scott that the complications associated with coordinating a non-conference football schedule for 24 teams across two conferences proved to be too difficult. Those complications, among other things, included the Pac-12's nine-game conference schedule and previous non-conference commitments.

"A great effort was made by both conference staffs to create football schedules that would address the variety of complexities, but in the end, we were just not able to do so. While everyone at the Big Ten is disappointed by the news, we look forward to continuing the historic partnership that we have with the Pac-12 and to working together on other matters in the future."