Jim Delany Wants Power To Fire Coaches Unilaterally... Except Not Quite: Beat The Clock, 07/19/2012

Share All sharing options for: Jim Delany Wants Power To Fire Coaches Unilaterally... Except Not Quite: Beat The Clock, 07/19/2012

The headline says at all... And then you read the article, which evidently not a lot of people, you know, actually did:

The proposal, part of a plan being circulated among Big Ten leaders, would give James E. Delany, who has overseen the league since 1989, and a powerful committee of conference presidents* the ability to penalize individual members of an institution, should their actions significantly harm the league's reputation.

The sanctions, spelled out in a document obtained by The Chronicle, could include financial penalties, suspension, or termination of employment.

That one line kind of changes a lot about this "ISN'T IT IRONIC THAT HE WANTS POWER TO CURB POWER". There's also a lot of other weird juxtapositions with respect to the idea of some folks being okay with the idea of a hypothetical "commissioner" for all of college football but having a real issue when one individual (with the backing of a group of other power brokers forming a collective of decision makers) wants to do it at a more micro level.

I'm honestly not even sure I personally have an opinion on the matter. I mean, harumphharumph, Delany, rubblerabble offseason, but, like, part of me certainly thinks he'd (co-)wield the golden hammer with accountability and responsibility knowing he'd be absolutely crucified in both the courts of public opinion and the media should he abuse it.

Whether this thing happens, well, who the hell knows. Seems improbable and grand stand-y/posture-tastic, but stranger things have happened in the land of the Blind1G where the one eyed Delany is king. Far more interesting to me than the headline was the following:

Big Ten officials are still in the early stages of debating how to handle fallout from the scandal. Among other ideas, the league's presidents and chancellors could consider removing Penn State from the conference, one Big Ten leader told The Chronicle.

So, yeah. That actually sounds a bit more tangible and may actually be on the table. There isn't sentiment strong enough to convey how much that would suck for Penn State fans. And given basic logistics ($$$$$$), there's virtually no way it could happen before the 2012 football season either way.

Shocking, I know. People aren't comfortable with the idea of someone else besides their bosses having the ability to terminate their employment and impact their livelihood. I'm sure you'd give a glowing review if a proposal came out in which a company investor or outside partner suddenly had hypothetical oversight over your employment as well. 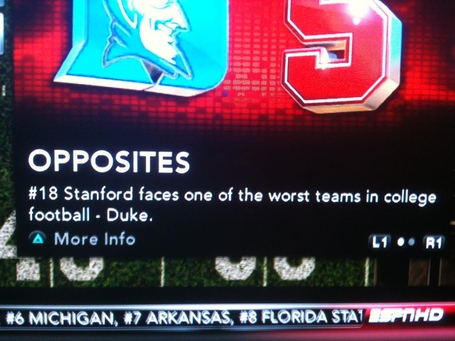 A baby alpaca. Looking at pictures of alpacas. Yo dawg.