What If: Eddie George Had Been An Ohio University Bobcat?

Share All sharing options for: What If: Eddie George Had Been An Ohio University Bobcat?

Saturday evening Ohio State legend and 1995 Heisman Trophy award winner Eddie George was inducted into College Football's Hall of Fame. Of course without Orlando Pace going in the following season, the gestures feels a bit hollow. None the less, we commend Eddie on a monumental achievement and a worthy celebration of a tremendous collegiate career as a Buckeye... By wondering what would've happened if he was born 16 years later and had instead gone to Brady Hoke's favorite in-state school, Ohio University.

Much like two weeks ago when we wondered what would've happened if Carson Palmer had instead spent his senior year in Columbus leading the 2012 (and evidently NCAA punishment scot-free) Buckeyes, with the help of our friends at EA Sports (and the return to form NCAA Football '13), we look at this other bit of revisionist history and see what difference, if any, Eddie could've made running out of Frank Solich's pistol formation.

We start things off in Happy Valley, where even in lieu of unspeakable tragedy and major NCAA sanctions, football must go on. To try and curb any optimism under first year head coach Bill O'Brien, Ohio U. and star tailback Eddie George roll onto the scene.

The Bobcats game plan? Give George the ball. Over and over and over and over. Ultimately, Penn State has no answer, and even with arguably the second best linebacker corp in the Big Ten, they're hapless to stop the larger conference skilled George and the Bobcats. Despite OU's defense's best efforts to give the game away late, Ohio pulls the "upset" 14-9, with Mr. George putting up some Heisman caliber single game statistics: 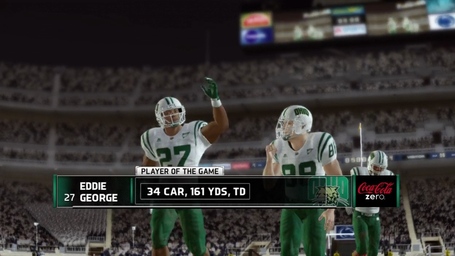 This hasn't been a particularly charitable year for Penn State fans, even in the virtual confines of EA Sports World: 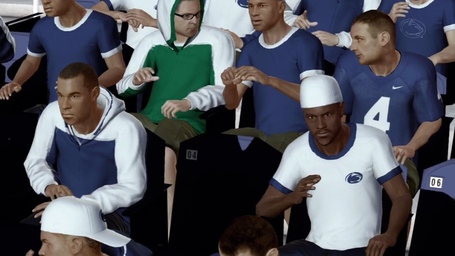 Who knew David Cross was an Ohio Bobcats fan?

So while Ohio University is a team a number of folks feel have a legit shot at being one of the noise makers in the MAC in actual 2012, how does an entire season with Eddie George added to the lot pan out?

George's numbers honestly left much to be desired (I'm blaming the coaches), but the Bobcats rolled to a 10-2 record. The 'Cats' only losses were a 21-42 defeat at the hands of Miami University and a 31-34 brutal OT loss to Darrell Hazell and the Kent State Golden Flashes (which knocked them from MAC title game contention).

Fret not, Ohio U. has their first Heisman finalist in the modern era: 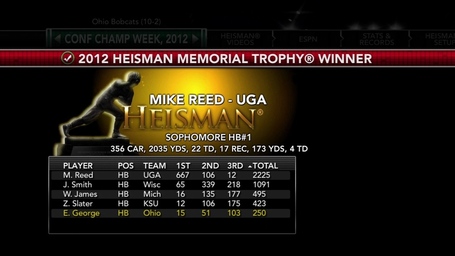 Don't worry, it's not like (now former) Georgia running back Isaiah Crowell won the Heisman or anything /collarpull

Of course George's paltry 820 rushing yards (meaning he accounted for 20% of his season total in a single game) and just 13 TDs leave a lot of questions. Was he injured? Nope; played all 12 games. Was he under utilized? Pretty much. Given that he'd essentially function like a bowling ball coming out of the pistol backfield, one has to wonder what digital Frank Solich was thinking.

But the fat lady hasn't sung on hypothetical Eddie George's Ohio U. career just quite yet. The 10-2 season was enough to get the Bobcats an invite to sunny Boise, Idaho and a berth in the 2012 Boise Famous Idaho Potato Bowl against the WAC's Louisiana Tech and head coach Sonny Dykes.

Would the buffet circuit after the seemingly courtesy trip to New York City be the untimely demise of George and co.?

Evidently not! Despite either mailing it in or merely being utilized as the most high profile decoy in MAC history, George returned to his true colors when it mattered, well, most-ish and all of the sudden returned to the Heisman form which led him to a College Football Hall of Fame career in reality with the Buckeyes in the first place: 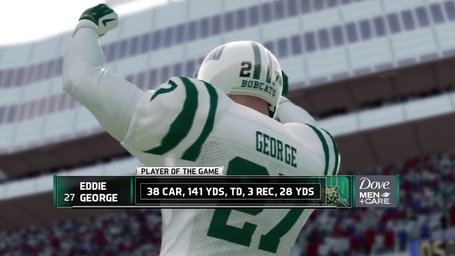 Celebrate you will, young squire. With George's aid, the Bobcats rolled to a 17-7 defeat of the Louisiana Tech Bulldogs. For accomplishing so much, the 'Cats were graced with this awesome digital placard: 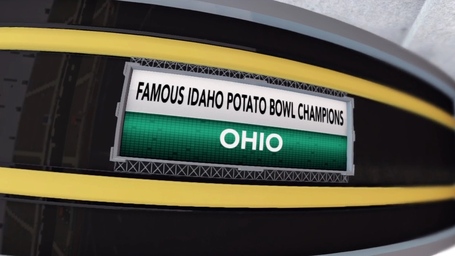 It doesn't get much better than that.

This post was sponsored by EA Sports NCAA Football 13. Check out the video for the game below.