Every Michigan Player Ever Is Getting Arrested: Beat The Clock, 07/23/2012

Share All sharing options for: Every Michigan Player Ever Is Getting Arrested: Beat The Clock, 07/23/2012 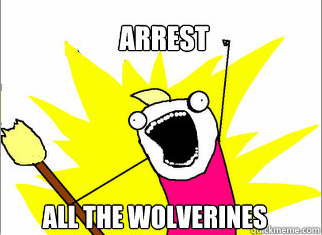 Michigan star running back Fitz Toussaint is now suspended indefinitely following a run in with Johnny Law while a bit sauced up. While some are openly speculating he may not be available for Alabama, I mean, assuming Brady Hoke wants to beat Michigan, I think it's safe to say he'll be reinstated after the punishment is dealt with internally.

But don't forget Glenville's own Frank Clark. He was arrested after being overwhelmed with Apple fever and (allegedly) stealing a Macbook Air from a dormitory. I mean, they are remarkably sleek, portable, and quiet. He too has been suspending indefinitely and while it's weird to weigh DUIs against petty theft, it seems more likely (particularly given his stature on the team) that he might actually face a more tangible suspension.

There's a lot out there today, but here's all you need to read:

YES YES YES. Expansion of power through, vague, indeterminate suspect means (and a plea to police ourselves). Cosigned.

Spencer wrote what I wish I could've yesterday. Must read.

Penn State, And The NCAA's Thirst For Punishment - SBNation.com

One year ago today I was stabbed and nearly died. I woke up in the hospital a few days later to find this. : funny