Those seeking gasoline for the fuel to criticize Urban Meyer the disciplinarian's track record just got another couple gallons of unleaded. ESPN 850 WKNR in Cleveland is reporting that Ohio State incoming freshman running back -- and a talent that supposedly had turned some heads to point -- Bri'onte Dunn was arrested over the weekend.

With Jordan Hall already out for a minimum of two or more games this coming fall due to a foot injury and Carlos Hyde potentially not the ideal fit for Urban Meyer and Tom Herman's offense, Dunn was thought by some to be a likely to candidate to take pick up some of the remaining load at the tailback position. Ohio State may now instead have to turn to the inconsistent last season sophomore Rod Smith to help alleviate the lack of depth at the spot.

Updates after the jump:

UPDATE: Interestingly enough, the only public records presently listed involving Bri'onte Dunn and Alliance, Ohio (the site of the purported arrest) come from a June 2nd, 2012 incident in which Dunn was cited for a failure to control - exercise reasonable control in a motor vehicle accident. The status of the case also lists 'arrested': 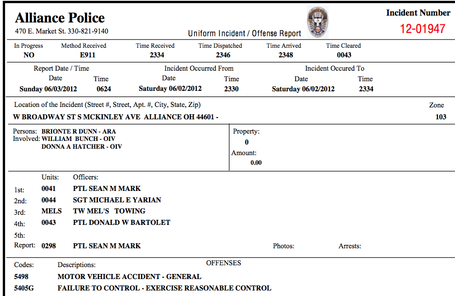 UPDATE (9:14 PM EST): It appears the previous arrest was a red herring and something less desirable did indeed transpire.

Heard from someone back home that the Dunn weekend arrest is real. Couldn't say anything else, but doesn't look like the June arrest is all.

Confirmed the Dunn arrest.. I have some more information but don't want to put it out there right now. I'm sure OSU will release a statement

Bottom line: Even if the rumors I'm hearing are true, I'd be very surprised if Dunn is kicked off the team for something like this.

One of the more unintentionally funny things on our message board is young people explaining to older folk what "sticky-icky" means.