It appears Urban Meyer has his second (or third, depending on how you look at it) legal issue in as many months as the head coach of the Ohio State Buckeyes. The OZone's Tony Gerdeman was the first to point out that an individual by the name of Storm Klein of Columbus, Ohio had been arrested on domestic violence charges late Friday evening, but case details make it pretty undeniable that it's the Ohio State linebacker. Unless there are multiple blonde 6'3, 240 pound individuals born in 1991 (which syncs up with Klein's 2009 high school year of graduation) of the same name in the Central Ohio area, it appears likely that Urban's next major disciplinary task is upon him.

The criminal case summary against Klein is as follows: 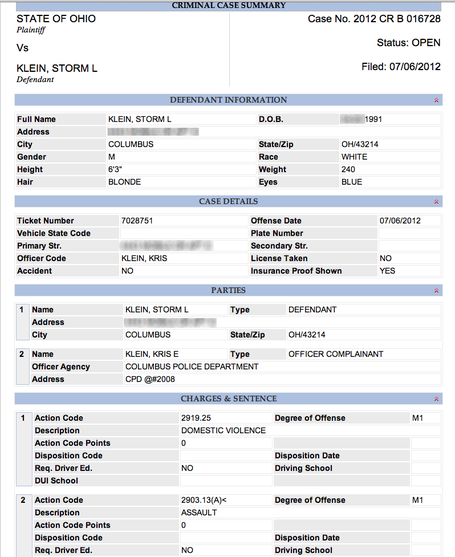 Domestic assault is a far cry more serious that urinating in public and evading police intervention. Klein, who'd lost ground on the starting Mike linebacker job to talented sophomore Curtis Grant, faces an arraignment tomorrow morning at 9:00 am in a Franklin County Courthouse and could be seeing the end of his tenure as an Ohio State Buckeye.

More as it comes to light and the University has comment.