What Makes A Good Neutral Site?

Share All sharing options for: What Makes A Good Neutral Site?

I was thinking about what DJ was saying in his recent SEC-scheduling post, and how it's an argument that deeply resonates with a lot of Big Ten fans. We play in cold weather stadiums, and warm weather teams rarely play games in our environment. Nearly every bowl game is in the south or west, and SEC teams are famously adverse to playing north of the Mason-Dixon line, with a few exceptions. Watching LSU try to slug it out in snowy Madison is certainly an attractive fantasy, even though an out-of-conference matchup would usually occur early in the season, when even Madison is still at least kinda warm.

The economics of big name early season matchups have recently made "neutral site" games a more attractive idea for schools. Several have played games in Atlanta and Dallas, and if a B1G-SEC matchup is going to happen before bowl season, it is increasingly likely that it may need to happen at a neutral site. Big Ten fans would (justifiably) balk at the idea of Atlanta being "neutral". But are there better options? What sorts of factors should be considered for a fair game? I have some ideas, after the jump.

The biggest reason for having these kinds of games, of course, is money. A matchup would have to feature teams that have some sort of market footprint in that market. Having BYU and Clemson play a game in Detroit would be stupid, for example, since there are few Mormons or Clemson grads in Detroit, and it's too far away for many alumni to attend. I also think that scheduling a game where one party is at a significant disadvantage. Having Michigan and Boise State play in Detroit is technically a neutral ground, but you would expect the crowd to be overwhelmingly pro-Michigan, which would kind of suck for the Broncos. If OSU, Michigan, or any B1G school played a game in Atlanta, I think you'd see a similar reaction.

Finally, I think you'd want a cool stadium, or at least a cool city, since a game like this becomes more of an event. If you're a fan, and you're going to buy a plane ticket to see your guys play a road game, do you want to spend the weekend in Toledo? Of course you don't. You can't sell that to recruits, and you won't be able to sell enough tickets to the locals.

With that being said, here are some locations that I think would make sense as neutral-sites:

1) Arrowhead Stadium, Kansas City. If we're looking at the closest thing to B1G-SEC neutral ground, I think this is it. The KC Metro area has plenty of Missouri grads, and the southern part of the state certainly has plenty of Arkansas grads and fans. It shouldn't be too hard to sell the locals on Texas A&M (a former Big 12 schools), Iowa or Nebraska either. Arrowhead used to host the Big 12 title game, and should be well equipped to handle all the logistics. KC is about a 3 and a half hour drive from both Fayetteville and Lincoln. An Arkansas/Nebraska tilt could be pretty evenly matched, and a lot of fun.

2) Soldier Field, Chicago. While it was a kinda cool idea, I think Wrigley Field showed it wasn't really a great place for a *football* game, but that doesn't mean we can't have big time college football in Chicago (put your hand down Northwestern. You are neither big time college football or in Chicago. You are not the answer to my question). Getting an SEC team to play a game here would be a bit of a stretch, but Chicago is a transplant city, and tons of fan bases are well represented. Half of the B1G is within a 4 hour drive of the city (Iowa, Purdue, Illinois, Michigan State, Northwestern and Wisconsin), and it's not like Chicago is hard to get to. Getting Wisconsin and Notre Dame to play in Chicago would be awesome, but even a farther flung B1G school like Ohio State or Nebraska would be able to fill the place up. Also, totally selfishly, I want Ohio State to play here because I live in Chicago, and they don't play Northwestern every year.

4) Rogers Centre, Toronto. Why the hell not? It fits 50,000 people, the only American football these guys ever get to see is the Bills (so they'll be thrilled to see somebody...good), and it'd be a fun and different experience. Toronto in September isn't cold-as-balls yet, and then you can pitch that your program is international. Notre Dame is playing in Ireland. Why not send Michigan up there? Hell, I'd fly to Toronto to watch the Buckeyes...unless they were playing a bowl game there, because that would mean they were terrible.

5) Estadio Azteca, Mexico City Actually, scratch that. If we're going international, and can take care of the requite safety and insurance questions, this would be unquestionably the most awesome. The NFL played a game there not too long ago with some success, and the stadium seats over 100,000 people, so it isn't like there isn't any money to be made. I feel like the chance to play in Mexico City could be a recruiting draw, it'd be great for the game of college football, and it would make awesome TV. Send Texas down there to play a game next season. 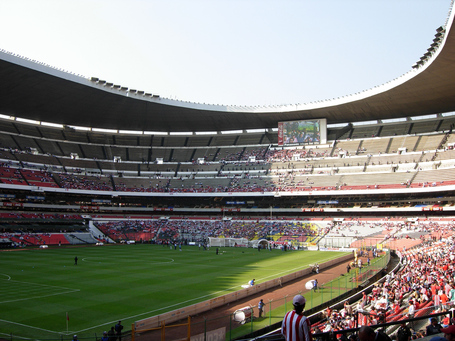 What do you guys think? Do you like the proliferation of neutral sites? Where do you think a good place to play them would be? Would you go to one?