What If: Carson Palmer Had Played For The Ohio State Buckeyes?

Share All sharing options for: What If: Carson Palmer Had Played For The Ohio State Buckeyes?

Carson Palmer. When the name first crosses your cerebral cortex, the subsequent thought is probably something along the lines of "what a f***ing idiot."

I don't watch what I say. I cannot stand the Buckeyes and having to live in Ohio and hear those people talk about their team it drives me absolutely nuts. Now we got Keith Rivers out there and we got Frostee Rucker we finally got a couple of other SC guys. It's amazing to hear what those guys think about that university and what they think about that football program and Tressel and all the crap I gotta put up with being back there. I just can't wait for two years from now when SC comes to the Shoe and hopefully we'll have a home game that weekend and I can go up there and watch us pound on them in their own turf and kind of put all the talk to rest because I'm really getting sick of it and I just can't wait for this game to get here so they can come out to the Coliseum and experience LA and get an old-fashioned Pac-10 butt-whooppin and go back to the Big Ten.

Of course much to Ohio State's chagrin, USC backed up Carson's 2008 pre-game smack talk. As a Kentuckian Indian Ohioan (I jest, Cincinnati) by vocation, it was still a pretty shit stain-y thing to broadcast to your fan base which geographically and by degree are probably made up of quite a few Buckeyes. But what if Palmer had been in Oakland where he is now and what if instead of running his trap in favor of the Trojans, he was doing so as an Ohio State alumnus?

EA Sports' "NCAA Football '13" (which hits shelves, physical and digital tomorrow) introduces a new feature called the "Heisman Challenge" in which you can take a number of famous, historical Heisman trophy winners and cast them into any number of zany scenarios you see fit. EA asked us which famous Heisman trophy winner we wished had suited up for the Buckeyes. Seeing RG3 do what many of us had hoped TP2 was going to do definitely came to mind, but in the interest of counter trolling, we had no choice but to imagine a world where Palmer had instead suited up for the Scarlet & Gray.

Now in reality, Palmer's original high school recruiting came down to Notre Dame and USC (though he also liked Colorado quite a bit). But let's get even more fantastical: what if Carson Palmer had decided to play for Ohio State and he was exactly the same player he was in high school but the year he committed was 2008? That would make his senior year 2012 and that would put him squarely as a senior starter for Urban Meyer's first edition of the Buckeyes. Hey, this is EA's world, not ours; just go with it.

Now, in full disclosure, Carson and I have a bit of a video game history. In high school, my favorite thing to do in the pre-Online Dynasty mode days was to take a major BCS program who was hiring a new head coach and take over the program myself. One year that was Jeff Tedford and Cal, another Pete Carroll's Trojans. Palmer was always fairly highly rated in the game (if memory serves me correct), but both in the game and in reality, he'd never really lived up to that promise... until of course his improbable Heisman trophy winning senior season.

Using "NCAA Football '13" we went ahead and took the previous hypothetical-hypothetical and made it a hypothetical-reality. Introducing the starting quarterback for the 2012 Ohio State Buckeyes, from Santa Margarita Catholic High, #3, Carson Palmer.

What about the second?:

College football sure is easy, no? After manually playing out a couple of easy series and jumping out to a quick 17-0 lead against Miami University, in the interest of fairness and journalistic (lol, sorry) integrity, I went ahead and simmed out the remainder. The Buckeyes ultimately prevailed 37-24, which lord help us if we give up 24 points to Miami in the season opener and only win by 13. None the less, Carson Palmer and Andrew Norwell (who's nicknamed 'Garcia' by the last name auto-generating Heisman Challenge mode) felt the need to celebrate with true USC aplomb: 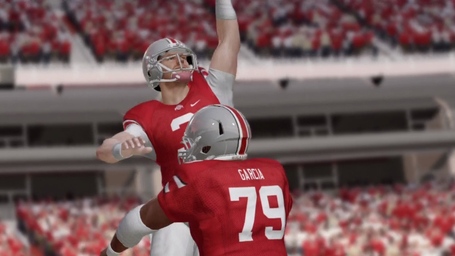 Naturally though, I remained curious: could Ohio State sustain that success? For an entire season no less?

I went and simulated the rest of the season, eager to see how the California golden boy would fare in an offense not 100% catered to his particular skill set. 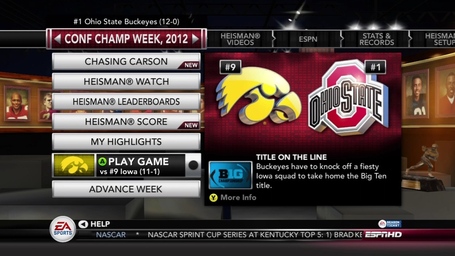 I guess in a world where Carson Palmer is Ohio State's starting quarterback in 2012, the Buckeyes' wisely sat themselves out of the previous post season to dodge a bowl ban. Let's just roll with it. I went ahead and simmed the Championship Game and Ohio State went on to promptly win their first ever B1G Championship game, 48-28. Evidently Miami U > Iowa, but we all knew that anyway.

So what about the downtown athletic club?: 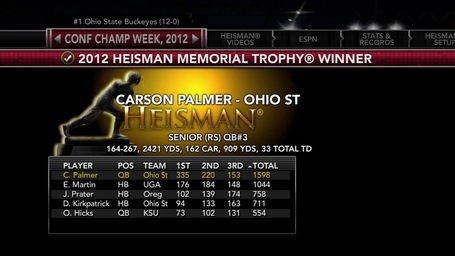 Dante Kirkpatrick is Carlos Hyde, FWIW. I assume if Ohio State has two Heisman finalists, we might all be a little more okay with not having a postseason to look forward to.

None the less, those are some mighty conservative passing numbers for Palmer (particularly after a 441 yard accruing season opener). Tresselball4lyfe? Plus 909 rushing yards? That Mickey Marotti is a god.

I suppose we're well past the point of suspending disbelief. So what fate befalls the fictitious 2012 Buckeyes? 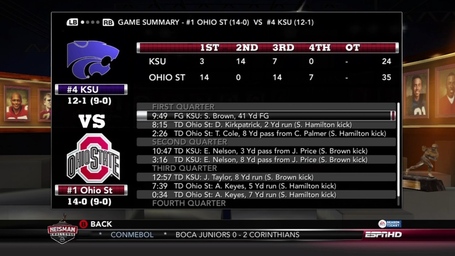 Just think: If only Carson Palmer had been born 9 years later, decided to play for Ohio State, and Jim Tressel still got fired, Ohio State would have another Heisman trophy winning quarterback and national champion under their belt. O-H!

In all seriousness, the Heisman Challenge is a fun (albeit sort of ridiculous) mini-game and the actual game itself is the best it's been in several years. You can actually lead wide receivers on throws. I know, it's magic.

Plus, the might sound full on crazy but, like, Ohio State is actually fun to play with. Using their own play book. Really. Honest.

Besides, we both know you're buying it either way.

This post was sponsored by EA Sports NCAA Football 13. Check out the video for the game below.