ESPN's "ESPN All-Access: Ohio State Training Days" rages on and in the third episode we saw plenty of the aforementioned. The series continues to be light on narrative as it focuses almost exclusively on training tables and practices, but alas it beats not having the show. Plus, you know, the free program selling advertising effects and well, it's pretty hard not to conclude its a net positive no matter how unimaginative the series feels at time.

So what stood out in the series' third episode?

-Football operations coordinator, Fernando Lovo, who we met briefly in the previous episode, was featured extensively with the thankless chore of waking players up. He did attribute his functioning to coffee, which, yeah, is almost a given.

-The players started their day eating and the like before getting ready for initial workouts. Poor Chris Carter is on a restricted diet, however, and wasn't allowed the caloric intake of his peers: 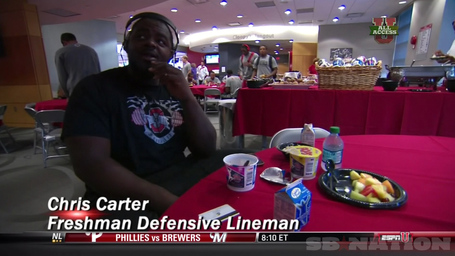 -Kerry Coombs was SUPER hyped. He got even more hyped later in the episode, but this early example was prime stuff from the defensive backs coach.

-We saw last week tweets about student managers purchasing 125 air mattresses so the players could stay in the football facilities to nap, sleep, and otherwise. In ep. 3, we bore witness to players tapping out right there on the weight room floor. 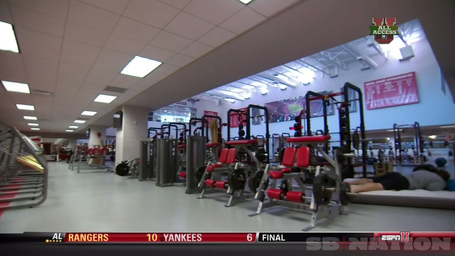 -And of course what may have been the highlight of the series so far, the funny visual of Chris Carter carrying an air mattress up stairs at the Woody Hayes Athletic Center:

-Devin Smith got back to his comedy roots doing more impersonations and being the general funny man of the team (#prayforcomedy). Alas, Mick Marotti caught wind at one point and definitely didn't seem to approve.

-We also saw Tom Herman cracking Ferris Bueller's Day Off and Step-Brothers references. So there was that.

-Of course there was the practice itself. We saw Luke Fickell for the first time and saw Urban Meyer state "that's the first time that looked like a friggin' offense.":

What were your general thoughts of the episode? Show dragging on or still a fun preseason distraction?

For those that missed it, be sure to catch it when it replies tonight on ESPNU at 10 PM EST.