The "season finale" (worry not! The show must go on and will on SportsCenter and College Football Live all next week, in perhaps more apropos doses on a more easily digestible platform) came and went and with it, more practice footage.

Yeah, yeah, the show didn't go quite as in-depth as basically all of us wanted, but it was still an interesting peak into the day-to-day activities and happenings of a football team we all have much emotional capital invested in.

So what did the "season finale" bestow upon us as the action moves from 30 minute chunks to ESPN and shorter highlights?

-Urban Meyer continued to preach "competitive spirit". He requested a carry over from special teams to everything the team did and said that while he preferred not to have to rely on a winners and losers type dynamic for a practice, it at times would be necessary.

-Meyer encouraged everyone to "go after each other's asses". The result was Carlos Hyde, El Guapo himself, unleashing hell on earth to an unlucky assistant:

-We saw Urban yelling (and lots of it). We also got some more circle drill action. After a few player-on-player stalemates, Urban decided to throw the Swaggenraut, director of player personnel Mark Pantoni, into the mixer against a hapless intern. The result?

-Then we got to see Dr. Professor Vrabro, Mike Vrabel, in a professorial atmosphere. He quizzed freshman d-lineman Adolphus Washington on what the "loose call" was. Washington quasi-knew? But hey, freshman, etc. 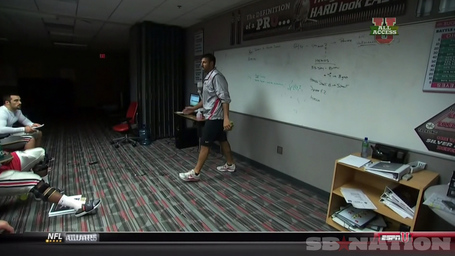 -We then saw the prof coaching d-line and special teams alike. Think smart but fierce barking and intensity. Mike Vrabel doesn't miss around.

-Alas, we got another peak at the offense and with it, a few things of note. One, Tyrone Williams (former T.Y.) is a tall, tall man: 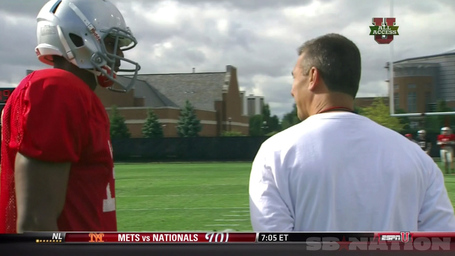 -Urban was trying to get him to buy in. Supposedly, per those in the know, Williams had a great last week of practice (in real-time) and could factor in to the wide receiver mix yet. In the episode, Meyer was particularly critical of freshman (and spring game star) Mike Thomas.

-We also saw a bit of very un-Tresselean offense, particularly from the second unit. Watch Chris Fields take the end around from Kenny Guiton and streak down the field with grace:

With that, we're done with the episodic version of All-Access. Did it live up to your standards, or were you hoping for more like those of us that've been spoiled by HBO's "Hard Knocks" and the Big Ten Network's "The Journey"?