The Enemy Of My Enemy

Share All sharing options for: The Enemy Of My Enemy

September 1st is only 10 days away. That means that in almost no time at all, all the writing, reading, watching, re-watching, speculating and wondering about the upcoming college football season can finally - FINALLY - take a backseat to sitting back and watching some actual, live college football. The Buckeyes open play against the vaunted Miami RedHawks in the game that most readers here are looking forward to most. But the marquee match up for the season's first week begins at 8:00pm that evening, when the Michigan Wolverines take on the defending national champion Alabama Crimson Tide in the Jerrah-Dome in Arlington, Texas.

I have lived in Columbus my entire life, save for four(-ish) years in Oxford and Cincinnati, and have been a Buckeye fan for the entirety of that time in Columbus. Being a Buckeye fan comes with many perks and benefits, like claiming the Best Damn Band in the Land, and having the uncanny ability to avoid both hypothermia AND hepatitis once a year. This fandom also comes with a distinct, unflinchingly rigid hatred of that school up North. More recently, however, being a Buckeye fan also carries the burden of resenting anything South of the Mason-Dixon Line, especially where "academic" pursuits come to mind. This of course means that the three worst letters in the alphabet for a Buckeye fan are often "S" "E" and "C".

Over the last few days here in Columbus, one of the popular topics on the local sports talk shows is this very game. Different pundits have said different things, some leaning toward rooting for the B1G despite it being Michigan, others leaning hard on any team that beats the Blue. So, as Buckeye fans, what are we to do when two of our deepest hatreds come together on national television? This one is easy.

I'm going against everything I hold near and dear to my Yankee heart on September first and rooting long and hard for the Alabama Crimson Tide. Repeat that sentence to yourselves, Buckeye fans. It will sting at first, and make you feel like you have upset a vengeful God. But you'll get used to it, and quickly. Besides, if given the choice between rooting for Michigan and taking a cyanide pill, I'm already asking for a glass of water to wash down the poison.

But, being a life-long Columbus native, I really don't have that much experience with being a fan, even if it is just for a few hours, of an SEC team. Having said that, through vast amounts of primary and secondary research a few twitter and Google image searches, I've discovered how I can turn into an SEC fan on the quick. Join me, will you?

Of all the things I know about SEC football, one of the most important is that you have to dress up like a douchebag on game days. Where did this tradition start? Great question! I don't know. But it seems important. So on September 1st, after I remove my replica Nike OSU jersey (which is what we Mid-westerners do on game day), I'll get out my khakis, a white oxford shirt, a crimson tie and a hounds tooth hat as phase one of my conversion. If anyone knows any leggy blondes I can put on my arm for the night, that would be helpful, too. 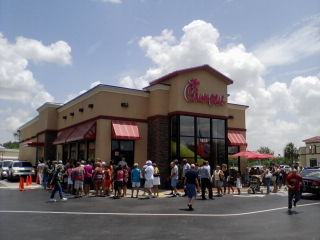 Omg, so popular, you guys.
(Image used under Creative Commons from PCHS-NJROTC)

I have no intention of starting any kind of a flame war here, let me make that clear. And I'll avoid whether or not I agree with Chick-fil-a's moral agenda. Regardless, nothing says SEC like perfectly average fried chicken on a bun with pickles. That's goooooood eatin. Regardless if you find their politics admirable or despicable, or if you think their commercials are aimed at the lowest common denominator of human life (and they basically are), SEC fandom and Chick-fil-a go together like peas and carrots, as a noted Alabama alum once said. Before you settle in to watch the Tide beat up on Michigan, head over to your local chicken chikin house and get you some chikin! But you'll have to do it on Saturday, since the place isn't open on Sundays.*

One thing you'll notice as you become more and more ingrained as a fan of Alabama is that most fans have a limited vocabulary, which only includes some prepositions, and only a few nouns and verbs. The most used here are "Roll" and "Tide". This is what ESPN will have you believe about Alabama - even on a deathbed, the only thing you need say to anyone is "roll tide" and you can be on your way to the pearly gates. Start peppering your salutations and closings with this phrase and you'll fit right in.

The other most important thing you can say as an Alabama/SEC fan, is the cheer that represents the state's and the region's college football dominance. If you are around any Michigan fans during the game, it is customary and suggested that you simply begin chanting the conference name to trump anything they say, even if Michigan is somehow leading the game. Add a southern drawl to it, you'll be fine: "ESSSS EEEEE SEEEEE!!!!!!"

The greatest ambassador for all things ESSSS EEEE SEEEE isn't, surprisingly, Gary Danielson or Uncle Verne Lundquist. No, the man who speaks to the huddled masses of SEC fans is the one and only Paul Finebaum, host of his own talk show syndicated throughout the SEC media footprint. But don't listen for Paul, listen for all of his callers. Those lucky enough to get on the show will generally be given free reign to give their somewhat biased opinion on the news of the day, typically in this fashion:

"But PAAAWWWLLLLL, we'z playin LSU at least once this year, why cain't we just say we already done won that championship? I'mma hang up n' listen."

Big emphasis on Finebaum's first name when you say it. That way, he and the listeners will think you're a regular.

With these four steps, we'll be well on your way to becoming SEC fans and a supporters of the Alabama Crimson Tide, if only for a day. It won't be easy to stomach (like the chikin' sandwiches) but watching Brady Hoke come back down to earth in front of our very eyes is something I think all of us can get behind.

Did I miss any steps in my plan? Are you going to act superficially indignant and post non-sequitur mean things because you disagree with me? Let me know in the comments.