Share All sharing options for: B1G Problems In Little Midwest

The Ohio State Buckeyes do not get to participate in college football's postseason this year, which means that, for a lot of people, the bowl season won't be as special. I know I will watch every game (with the exception of "Alabama/LSU 4: This Time It's Personal, Y'all") but I will do so without the normal pomp and circumstance of comparing others' results to whatever Ohio State did in their bowl game. So the bowl season has lost some of its luster this year.

Luckily, the B1G used week 2 of the young college football season to have their own microcosm of what the B1G usually does during bowl season: lose, lose a lot, and get embarrassed on a national stage. How generous!

The past week was not pretty, and has shed some light on some huge problems with our beloved conference. Let's look back, after the jump.

Let this soak in: the best win by a B1G program last week was Northwestern scraping out a victory over now 0-2 Vanderbilt. Reread that sentence and choke back the vomit. While five B1G schools posted wins (and, admittedly, Sparty and the Buckeyes looked good-ish in their wins, and everyone but Shoelace looked awful in Michigan's win), the six losses suffered made very clear that the conference is a two-horse race, and one of those horses can't even play for a title.

For added effect, I recommend playing this to enhance your reading experience: 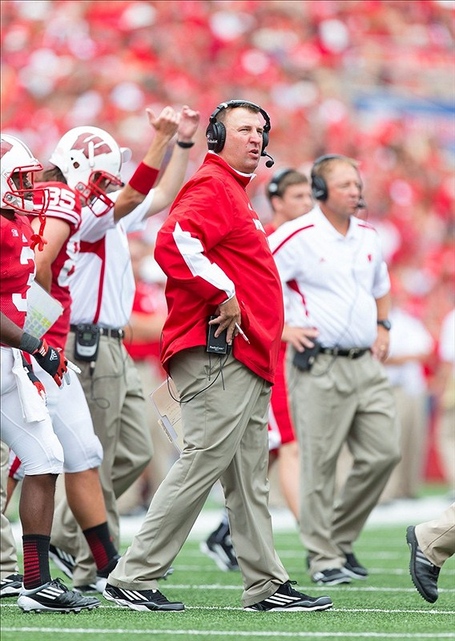 We must start at the top, if for no other reason than it means we get to have some fun with Bret Bielema and his plucky bunch of no-show specialists. Bucky only gave up 10 points to Oregon State in Corvallis, which is normally good enough to get a win. Unless you only score seven points for yourselves. Last year's Heisman finalist Montee Ball looked more like Montee "Small" (joke credit to Rick Reilly, probably), going for an un-stiff-arm-statue-like 15 rushes for 61 yards and no scores. Bucky couldn't get anything going all day, and got their first loss of the year in September. I'll bathe in the schadenfreude of a Bielema loss, just as anyone else would, but that bath gets a little dirtier when you consider how the rest of the conference fared.

Penn State kicked themselves in the foot and lost to Virginia by a point after getting a PAT blocked and four (FOUR!!!) separate field goals in their game. "It's going to be a long year in Happy Valley" was uttered a lot in week 1. They should print it on the tickets after this week.

Side note: if you were PSU Kicker Sam Ficken, wouldn't you take advantage of the free transfer rule put in place because of the Sandusky Scandal? Shit, I'd be running to another school like 105,000 angry fans were chasing me. Because they just might if I ever have a kicking performance like that again.

Purdue let "Touchdown" Tommy Rees beat them on a last minute drive. Your argument is invalid.

Iowa clearly showed that this year is probably going to be another off year. The Hawkeyes lost to Iowa State. Again. This time in Iowa City. And only put six points on the board for the day. Bret Bielema thinks that kind of offensive output is off-putting, Iowa bros.

TMajik, the arm-punter for Nebraska, made Jim Mora Jr Sr whatever generation this Mora is look like an actual football coach, and this loss will look even worse when USC puts the Bruins in the ground in November.

The final death rattle for the conference started at 10:30 on Saturday night, and was all but over by 10:45, as Arizona State took Tim Beckman's Whimpering Warriors of Urbana-Champaign to the woodshed, winning 45-14, in a game that really wasn't even that close. Illinois was without starting QB Nathan Scheelhaase, whose effect on the game might have kept the Illini within 20. Maybe.

Can we extrapolate a whole lot from this weekend? Is the B1G this bad? Maybe it was just a couple of teams getting caught off guard. I mean, hey, if it can happen to Arkansas at home against Louisiana Monroe, it can happen to anyone, right?

Me, I think this speaks to a conference with major depth problems. While this might be good for teams like Sparty, who should coast to the conference championship game, the national reputation for the B1G has taken another huge hit when it really did not need it. B1G problems need big solutions, and hopefully week three will help these teams find them.

Otherwise, it's going to be another long, bowl-like weekend in B1G Country.