Know Your Enemy Of Your Enemy: How Ohio State's Opponents Fared In Week 3

Share All sharing options for: Know Your Enemy Of Your Enemy: How Ohio State's Opponents Fared In Week 3

So I watched the OSU/Cal game with my in-laws, thinking it wouldn't be exceptionally stress-inducing, and there could be some nice bonding opportunities. I'm afraid they saw a side of me that I was hoping to keep under wraps after that second half. My father-in-law is the leader of an LDS congregation in Evanston, so it was lucky that I was able to keep any 3rd quarter profanity deluge under wraps. But there were lots of moments that inspired comments like "who is Matt talking to? Why is he yelling? And why does he keep pacing around the living room? Now I see why Taylor [my wife] won't let him own a TV".

Oh well. Buckeyes win, and I didn't do throw anything valuable or cause a family disturbance. Week three was a success, right? That's more than we can say of some Buckeye opponents for this week. Let's take a look at how the schedule broke down in week three.

Miami (OH) (1-2) LOST at Boise State 39-12. Teams better than the Redhawks have blown it at The Blue, so losing isn't a real disgrace. The Redhawks were in this game at first, leading right before halftime, before Boise's offense turned on the jets and Miami was unable to keep up. Boise running back DJ Harper, a 6th year senior (so is DJ a doctor now?) ran for 162 yards and 3 TDs, and the Broncos rolled up 599 yards of total offense. Miami QB Zac Dysert was efficient (20/27), but held to only 176 yards and no scores. He threw for over 300 against Ohio State. WELP. The Redhawks have a great shot at win number two next week, as they host winless UMass next week.

UCF (2-1) BEAT Florida International 33-20. UCF raced to a 23-0 halftime lead and never looked back against the Golden Panthers. FIU's offense was completely handcuffed in the first half, as they were limited to only 26 total yards, before shaking loose for 280 after the break. Too little, too late against the Knights. UCF QB Blake Bortles was solid again, going 20-30 for 251, 2 TDs, and a pick, and Darian Mallary has two rushing TDs for the Knights. UCF has a week off, and then will host SEC newcomer Missouri in what could be a very interesting game.

UAB (0-2) LOST to #7 South Carolina 49-6. The big news for football fans here isn't the expected blowout, but the shoulder injury to South Carolina QB Connor Shaw late in the 2nd quarter. Despite outgaining UAB 501-267, and limiting UAB to 27 yards rushing, South Carolina coach Steve Spurrier quipped that "This was one of the closest 49-6 games I have ever been around". Don't ever change, Ol' Ball Coach. Gamecock RB Marcus Lattimore has 12 carries for 85 yards and a score. UAB QB Jonathan Perry went 17/34 for 219 yards. The Blazers Trogdors face OSU next week.

#21 Michigan State (2-1) LOST to #11 Notre Dame 20-3. Michigan State QB Andrew Maxwell had to throw 45 times, and that should tell you everything you need to know about how this game went for Michigan State. Star RB Le'veon Bell was held to 77 yards on 19 carries, and the swarming Irish defense made sure that Maxwell couldn't throw his way back into the game. Irish QB Everett Golson made just enough plays (14/32 178 yards and 1 TD and 1 rushing TD) to overcome the fact that the Irish were 1-14 on 3rd down. Michigan State gets a nice bounceback game next week, when they host the hapless Eastern Michigan Eagles.

#25 Nebraska (2-1) BEAT Arkansas State 42-13. The Cornhuskers rolled up 347 yards rushing in a win that was overshadowed by head coach Bo Pelini's hospitalization for the flu. Pelini screamed his immune system to victory, and he's expected to be back at work and ready for Nebraska's next game. The Cornhuskers did well to hold a potent Arkansas State offense mostly in check, as the Red Wolves' only TD game off a Taylor Martinez fumble recovery. T-Magic was mostly great, fumble not withstanding, as he was 13-14 for 180 yards and 2 TDs, while also adding a rushing score. The Huskers did turn the ball over four times, something they won't be able to get away with later in the season. Nebraska finishes their non conference slate by hosting the FCS Idaho State Bengals next week.

Indiana (2-1) LOST to Ball State 41-39. NOOO THE PERFECT HOOSIER SEASON DREAM HAS BEEN SHATTERED. Ball State QB Keith Wenning engineered the game winning drive of 44 yards in 49 seconds, and the Cardinals kicked the winning field goal as time expired. The Hoosiers have to be happy with their offensive production, rolling up 558 yards in their first game without injured QB Tre Robinson. They allowed themselves to fall behind 14-3 and 38-25, and couldn't dig their way back in time. Indiana also gave up 127 yards to penalties. Wenning threw for 3 TDs and 222 yards, going 26/44. Indiana has next week off, an then starts their Big Ten season at Northwestern.

Purdue (2-1) BEAT Eastern Michigan 54-16. The Boilermakers rushed for nearly 400 yards and Caleb TerBush tossed 2 TDs in a total snoozer. EMU's only TD before the 4th quarter came from an interception return from somebody named Pudge Cotton. If you are a football team starting somebody named Pudge, you probably aren't very good...and the Eagles certainly aren't. Akeem Hunt ran for 106 yards on only 4 carries, and the Boilermaker defense forced 3 turnovers. The schedule doesn't get too much tougher for Purdue, as they host Marshall next week.

Penn State (1-2) BEAT Navy 34-7. Good for Penn State! Much maligned Matt McGloin threw 4 touchdown passes, the Penn State defense forced 4 turnovers, and the Nittany Lions got their first win in a blowout. PSU WR Allen Robinson seems to have emerged as their home run threat, and he burned Navy for 136 yards and 3 TDs on 5 catches. Penn State will likely need to find ways to get more production out of their running backs, and their leading rusher only had 50 yards, but a blowout win is a blowout win, even if Navy may end up being horrendous this year. Penn State has an intriguing game next week against Temple (lead by running back Matt...Brown) to determine supremacy of the state of Pennsylvania.

Illinois (2-1) BEAT Charleston Southern 44-0. The Illinois faithful got just what they needed to wash the beatdown by Arizona State out of their mouths, as the Illini defense choked the life out of a bad CSU team, holding them to 29 yards passing and only 125 overall. Backup QB Reilly O'Toole had a career day, going 26/31 for 333 yards and 5 TDs. Illinois is still without regular QB Nate Scheelhaase, and the chance to give backups some experience may come in handy throughout the season. The Illini have a tricky game against the running and gunning Bulldogs of Louisiana Tech next week.

Wisconsin (2-1) BEAT Utah State 16-14. *DOUBLE FART NOISE*. Is there any team in America more disappointing than Wisconsin right now? The Badgers needed Utah State to miss a last second field goal to escape with a win, and once against failed to establish any kind of production on offense. Wisconsin's QBs (Danny O'Brien and Joel Stave) combined for a 7/16, 78 yard turd sandwich, and while Montee Ball still ran for 139 and a score, he's gaining less than 4 yards a carry as defenses are able to focus completely on him. Wisconsin also added a score via interception return...if they are unable to find other playmakers soon, the preseason Leaders Division Champion may be looking up at three teams in the standings. The Badgers play UTEP next week in a game that will likely end up something like 9-3. Gross.

#18 Michigan (2-1) BEAT St.Mary's Little Sisters of The Poor At Umass 63-13. Denard Robinson did what we all thought he would do, put up video game numbers against a terrible football team, accounting for nearly 400 yards of offense and 4 TDs in 3 quarters of action. Michigan ran for 294 yards, with 19th century oil tycoon running back Fitzgerald Toussaint going for 85 yards and a score, and Robinson added 106 more and another touchdown. Perhaps most importantly for Michigan fans, their defense didn't let an inferior team hang around until the 4th quarter, although to be fair, Umass might actually be the worst team in FBS football. We'll get a chance to see how much Michigan's defense has improved when they travel to South Bend to take on the #11 Notre Dame Fighting Irish net week.

QUICK HITS FOR THE REST OF THE BIG TEN...

Northwestern (3-0) outgained Boston College by about eleventy billion yards but couldn't hit paydirt until their 100th play. Luckily, their defense was lights out and they won 22-13. Don't look now, but Northwestern has beaten 3 BCS teams, gets South Dakota next week, and could easily end up 6-0. They don't play OSU, Wisconsin or Purdue and get Nebraska and Iowa at home. Don't sleep on the Wildcats.

Iowa (2-1) beat Northern Iowa 27-16. The good news is Iowa scored a few touchdowns, and had great success running the ball. The bad news they only beat an FCS team by 9 points and still have a tire fire of a passing game. Iowa gets one more tune up game against Central Michigan before the Big Ten slog starts. Doesn't look good for them.

And HOLY CRAP MINNESOTA IS 3-0. MINNESOTA HAS THREE WINS. THEY BEAT WESTERN MICHIGAN WHICH IS A REAL COLLEGE. How did they do it? 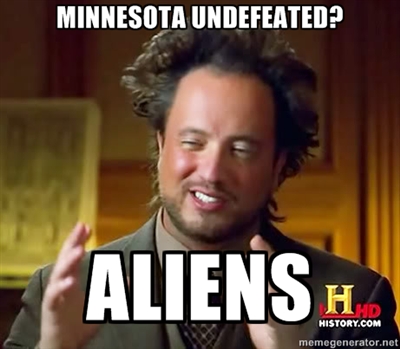 Well, there we go.