Share All sharing options for: The Presidential Power Parlay: Week 4

The 29th (and greatest) U.S. President, Warren G. Harding, was a renowned gambler, golfer, and lover of life. As such, his words are brought to you here through the medieval art of necromancy. Seeing as President Harding ushered us into economic success unheard of in human history (before being tragically assassinated by his jealous wife--which tanked the economy), his words here might as well come to your doorstep in the form of etched stone tablets. (All views and opinions presented here should be considered only those of Warren G. Harding himself, obvii.)

As the subject matter enclosed is intended for mature audiences only, reader discretion is strongly advised.

Life is a funny thing. One minute, you're snorting cocaine off the tight stomachs of Russian party girls before entering the 3rd (and most critical) hour of a bacchanalia; the next, you're rolling around in a siberian gulag town with a band of krokodil stick-up boyz looking for that honeypot of dope, cash, tail, or whatever.

Gone were my lavish lifestyles, pure coca biproduct, and naked girls wearing all different skin colors. My companions were an old Russian crystal fiend, Andrei, and a broken down street walker named "Roxy".

I had already pawned my golden AK-47, but I trudged on in my crocodile skin shoes and tuxedo, wielding a rusty machete.

Andrei told me to "Make sure you keep an eagle eye out." Buddy, I sleep with one eye open and a weapon close to my heart. That's the thing about a Marionaire -- we're at home in your penthouse or in the gutter.

For whatever reason, I grew a soft spot for Roxy. I don't know if it's because I like tall, blonde, awkwardly built pasty white women, or if I just happen to like my women plain raggedy, but there's something intriguing about a girl on the needle. (For example, they're as barren as the Nevada desert.)

At this point, some of my flesh had rotted away due to extended krokodil use. What do you need skin for anyway? I had never figured it out.

So, one night, of course ol' Andrei tried to come at me with a knife because apparently he too had a soft spot for Roxy (and by soft spot I hope you all are able to discern what I'm speaking on.)

I don't know if any of my readers have ever eviscerated a homeless man with a machete and felt his hot guts fall onto your socks (the only thing I sleep in, even if I'm sewer running), but it's quite the liberating feeling. Watching a homeless man's life drain out of him as he topples to the ground, moping about how he'll be blotted from human existence? Good lord, man, I love being a 1920's Republican.

Shanking a homeless dope fiend in an abandoned town in Siberia would have been the sketchiest thing I did all last week, but I also wagered on a team coached by John L. Smith. What ever was I thinking doing putting money on John L. Smith? HIS MIDDLE NAME STARTS WITH AN "L", IT DOESN'T GET MUCH MORE OBVIOUS THAN THAT.

I could quit the drug game and go back to reading nonsense on the internet, but where is the fun in actually researching things? I might as well grind it out in the gutter while I'm still spry enough to do so. (Hopefully the Good Lord gives me whale of a syphilis case that kills me before I strike 75.)

I'm done screwing with these Russians -- I could burn their casino down like I did to Ronda the Gypsy Queen's palace -- but I don't do jail well, and if there's one thing the Russians are good at besides cyber crime and sex trafficking, it's imprisoning people.

I came to Russia to quell a Pussy Riot, only to find out that's just the name of some "punk rock" -- whatever the hell that is -- band that didn't kiss the pinky ring of Comrade Putin. Talk about false advertising. Russia is a desolated wasteland with drifting dope fiends.

Thankfully for me, I have a syndicate of money laundering and wiring that spans the globe. I decided I'm through with these off-brand crackers, and it was time to return to the City of Sin.

So I called up and old school pimp I know from down around the way, Arturro, and I asked ol' dude if he'd be willing to put some cash down in my name, because Papa Bear was coming down.

Arturro owns some "pizza shops" all over the west coast which he "franchises" for the right price. He supplies the "pizza" and I bring the hookers. Talk about a Dream Team.

This weeks $10,000 Presidential Power Parlay is something mean. Have you ever rolled up a joint and sprinkled some crushed up crystal meth on top of it? That's basically how this parlay is about to shake up Vegas' world. $10,000 to win $60,000.

Clemson at Florida State (-14). Florida State hasn't played anybody, and that trend continues into this week. I see Dabo Swinney is on some quest to bring a national championship to Clemson, and that made me laugh. The only place I'd trust a guy named "Dabo" to lead me is to the shitter. *SEMINOLE CHOP*

Kansas State at Oklahoma (-14). If there's one thing Bobby Stoops is good at, it's dismantling inferiorly talented teams at home during the month of September. That's all you really need to know about my thinking on this banger.

As you can see, I've selected some new warhorses this year. Normally, I've established teams I believe in by week 4, but alas, it seems to me that Alabama is the only team head and shoulders above everyone else, and I'd rather be impaled with a rusty spike than wager cold hard cash on those cretins from Alabama.

I have branched out in an effort to find my warhorses, and I don't expect to be left hanging this week.

Vegas, I'm coming for you. 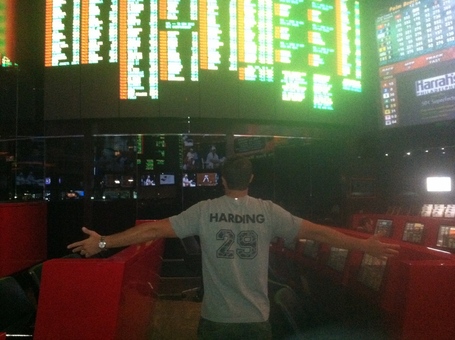