Ohio State's now through two full weeks of practice, one game, and less than 24 hours from their second in the Urban Meyer era. Of course this also means Mark Pantonio, et al are in full swing when it comes to working the phones and postal service to get the Ohio State brand front in center in the faces of the best college football talent across the country.

In their own right, the future Buckeyes that comprise the class of 2013 have been doing their part to make Ohio State better. A number of the most prolific high schoolers across the country suit up again tonight with a chance to continue using actual game experience to get them ready for the next level.

But before we look at what's been going on with respect to those on Urban Meyer and co.'s radars, a moment of BASKETBALL RECRUITING BREVITY /BOOM BAPTIST'D: 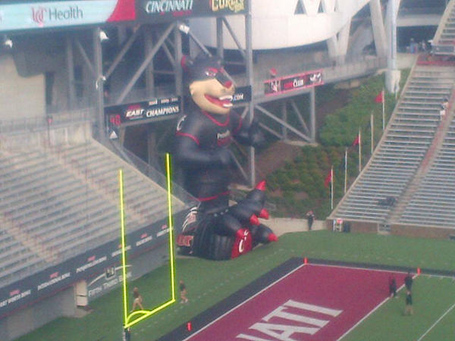 He then naturally reflected on the paltry state of Pittsburgh Panther football with a little fauxlosophy:

If the best things in life are free then why do we pay attention?

And speaking of Barker, this gem from a great piece over yonder at standard bearer, The OZone, caught our eyes:

Ozone: Did you receive an offer? If not, what did the coaches tell you as far as an offer?

Barker: They did not, but on ESPN All-Access, I was watching and paused it and there was board in the coaches area. On it was a list of QB prospects and I was No. 1 on the board. Hopefully they offer me and I have a vibe that they like me.

Interest making, to say the least.

And speaking of the Brozone, New Albany's Darron Lee sounds like he's doing work at helping round out Ohio State's 2013 class:

LEE: Really good experience, I did not participate, I was just there to watch and help recruit uncommitted players. I talked to 2014 recruits as well as 2013 commits Evan Lisle, Joey Bosa and Billy Price. I also got to hang out with the coaches, which I have not done since I committed.

I think I speak on behalf of Ohio State fans everywhere when I say, thank you, sir.

Credit where credit's due to OSU freak in training Ezekiel Elliot on the following prestigious honor:

Ohio State RB commit Ezekiel Elliott tells me he's been selected to play in the US Army All America Bowl.

'14 athlete Jalen Hurd, who talked to us a few months back, still has the Buckeyes in his top 5:

And for your troubles, some Hurd heat:

Hurd would be a huge get for the Bucks.

Also, it continues to sound like Joe Haden's kid brother Jonathan might just have a future being coached by the same mentor that coached up his big bro.

Ozone: What are your top schools now and who is your leader?

Haden: Right now Ohio State is my leader, other schools I like a lot and will try to visit are Florida, LSU, West Virginia, Wisconsin, North Carolina and Miami.

Haden's presently at Friendship Collegiate Academy in Washington D.C. and think he projects to running back at the next level (though there's plenty of murmurs he'd be best suited as a corner like his older brother):

Hmm, also seems like '14 no. 1 Da'Shawn Hand might owe his mailman a tip this Christmas. North Carolina alone sent Hand 54 letters (he wears the #54). Yikes: