Share All sharing options for: Relive The Ohio State Buckeyes' 31-16 Victory Over UCF In GIFs, Pictures

Ohio State had a solid though underwhelming (and for the most hardcore of Buckeyes, likely wholly unsatisfying) 31-16 win over the Central Florida Knights Saturday. Let's try and get some perspective though, shall we?

The Buckeyes' offense looks competent for the first time since parts of the vacated 2010 season and though we're working with an insanely small sample size, their best through two since the 2006 national runner up season. The defense on the other hand? Well, we'd all thought Luke Fickell being able to focus his full attention on the defense would result in a more return to form for the outstanding for most of the last decade Silver Bullets. That hasn't happened quite yet, but that doesn't mean it's all on the coaches. If the players just don't execute, there's not always a ton of buttons the coaches can push to magically get it out of them. We'll give it an incomplete for the time being.

Meanwhile, there were some very watchable, entertaining (watchably entertaining?) moments during the 31-16 W. Relive them with us down below:

It wouldn't be a 2012 Ohio State football season without an athletic play from Devin Smith.

C.J. Barnett may have made us all say a variety of profanities during much of Saturday's action, but on this play he made the UCF faithful resort to them. 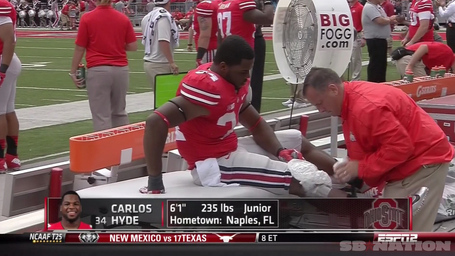 Welp. El Guapo's sprained MCL could have the Buckeyes awfully thin next weekend against Cal. 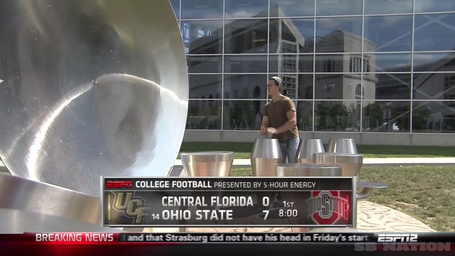 Doesn't he know that alien symbiotic black ooze lies in those bad boys? 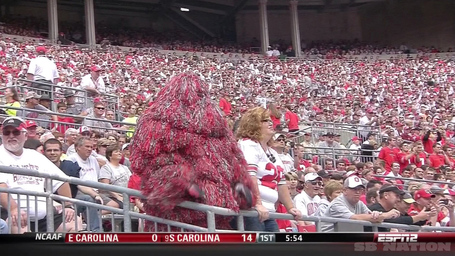 Sleep is the cousin of death and also the last thing you want to do with THE BUCKSQUATCH on the loose.