ESPN opened it's gun ports and unloaded a slick infographic broadside on the state of Midwestern recruiting. But, as major entertainment outlets tend to do, completely missed the bigger picture.

Share All sharing options for: Why the Big Ten is really down (and who we destroy to fix it)

There was a time not too long ago that the Big Ten was more widely respected. Not only as a powerful, Machiavellian media entity, but also as one of the premier talent showcases in college football. It was a time when quarterbacks at Purdue became legends, Minnesota had perennial NFL starters in its backfield, and seemingly half of the wide receivers in the NFL stated "THE Ohio State University" on camera before every primetime game. Sadly, that day has come and gone. Or at least so says these one thousands words.

It's certainly hard to argue, considering the performance of the conference over the last couple of years: perennial failures during bowl season, flops in high profile non-conference match ups in some of the most watched games of the year, and seemingly national scandal after national scandal filling the headlines. Like bile leaking from a putrid corpse, plenty of blame spews forth, with wailers blaming demography, geography, and even the likes of ESPN itself for the B1G's mediocrity. These are red herrings. Somehow the actual culprit of this decline has thus far escaped scrutiny.

The true threat to conference supremacy is closer to home, and infinitely more sinister for it. Even while sapping away at the very lifeblood of a conference, this villain lives among us. They may be your friends, your partners, even your parents.The true cause of these years of mediocrity is none other than those plucky upstarts known as the Mid-American Conference. Behold, our own "slick" infographic: 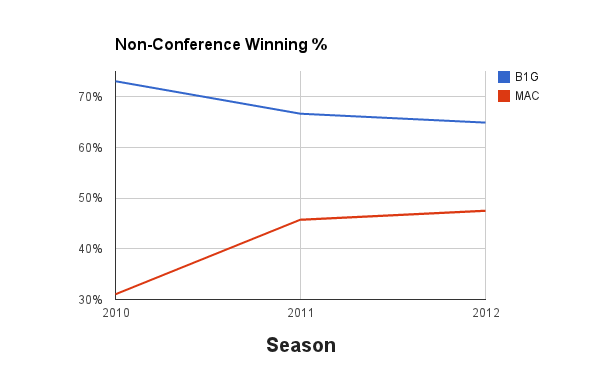 Clearly the decline in the Big Ten's non-conference wins coincides almost perfectly with the recent rise of the MAC to national prominence, and if ESPN has taught me anything, it's that overt coincidences based on small data sets are basically science. The MAC is slowly but surely subverting their bigger brothers. But how?

As United States Air Force Brigadier General Jack D. Ripper would say, they're stealing our precious bodily fluids. The MAC is snatching talent from the bottom of the Big Ten hierarchy, turning Indiana and Illinois into quivering masses of suck. All of those 2-star guys that provide depth at key positions, and occasionally turn into surprising studs after the fact, are being systematically converted into pint-size, weekday warriors. They're stealing our precious bodily fluids, indeed.

There can be only one solution, and it's rather obvious: we destroy them before they destroy us. We annex those teams without directions in their name or named after a tiny town (which basically leaves UMass, I know, but if the latest round of Big Ten expansion has taught us anything, it's that in order to win Risk, we pretty much need the east coast). The rest we destroy. Nukes would work.

Or, you know, the Big Ten could do the hippie thing and simply hire better, more competent coaches, supplement their rising stars with a braintrust of highly compensated top-tier assistant coaches, and start acting like a conference that actually gives a damn about winning football games against teams other than themselves.

As for outlets like ESPN, they're the driver of the degenerate Party Bus that is the annual bandwagon. It's nothing you don't already know, but they routinely shamelessly promote paper thin (from a depth perspective) programs of yesteryear like USC, their corporate partners who are also a shadow of their former selves (e.g. Texas), the prettiest girl on the block (but one they're also in bed with) in the SEC, that band they heard on and episode of Girls (or more realistically the best of Green Day, The Rolling Stones, or whatever other target 40-something demo the major label compensating them for splicing their songs into their highlight packages want that week/month); anything that is 'hot'. The venerable network is now the annoying sports know-it-all at the office, not the magnificent bastard pulling the strings behind the scenes. Ugly Tuna Saloona DJs? Yes, but demographers and sociologists, they most definitely are not.