Land-Grant Holy Land has you covered on what teams will be donning unique threads this weekend.

While their standard home set is among the best in college football, the Owls wore a special feathered helmet to open the season at Notre Dame. Against Louisville, the team paired this helmet with their black jerseys. 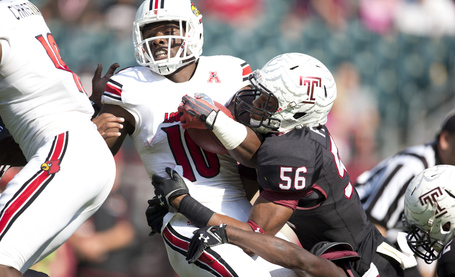 The Owls traveled to Cincinnati on Friday night, where they wore a helmet with the Liberty Bell on one side.

The Tigers will wear a decal on their helmet for the remainder of the season in honor of former athletic director Bill McLellan. Atheltic Director at the time of Clemson's 1981 national championship, the school's first in any sport, McLellan died on September 30th of natural causes.

Against Florida State, the Terrapins wore their White Ops uniforms. However, after the 63-0 beatdown, it's unlikely they'll be worn again anytime soon. When the team hosts Virginia, they will be outfitted in their black helmets, red jerseys, and black pants.

Against Minnesota, the Wolverines wore a "LHS" decal on their helmets in honor of the son of graduate assistant Adam Stenavich, who was only two months old at the time of his passing.

It's game week. We have a few new things this week for Texas. See ya in Dallas #Boomer pic.twitter.com/DVSHklHdXw

For the second week in a row, the Cowboys wore a helmet featuring the widely disliked "Phantom Pete". Unlike the white helmet worn in the loss to West Virginia, the helmet won in the win over the Kansas State was black. 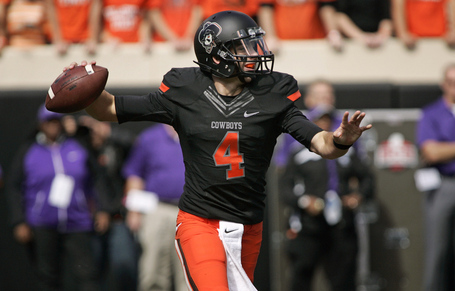 Like their rivals from the north, the Longhorns will wear a gold-trimmed version of their traditional home set. The gold is in honor of the Golden Hat trophy, which is awarded to the winner.

Among the first schools to wear a wide array of helmets, the Horned Frogs wore gray frog skin helmets in their loss to Oklahoma. This particular helmet has been worn four times previously (all wins) and was originally supposed to be worn in the Rose Bowl victory over Wisconsin, until Gary Patterson chose in favor of a more traditional look. 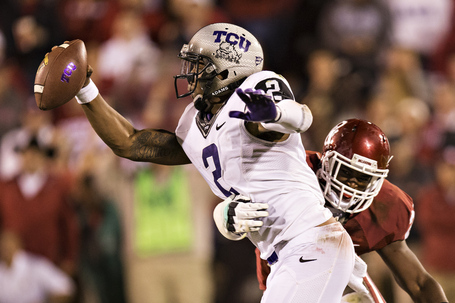 Usually, teams raising awareness for breast cancer stick to pink accessories like gloves, cleats, or wristbands. Not the Aggies, who will wear pink jerseys against Rice as part of the schools "Tough Enough to Wear Pink " campaign.

More often that not, a team trying to stand out from the pack does too much. That's exactly what the Eagles did with the helmet they'll debut this weekend against Army. From one side, it looks like a white version of EMU's standard helmet... 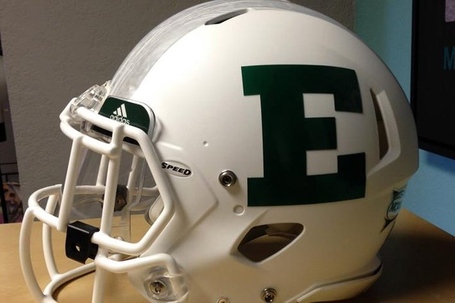 but flip it around and you'll see the Michigan state outline. The attention to detail is great, with the upper peninsula of Michigan even making an appearance. 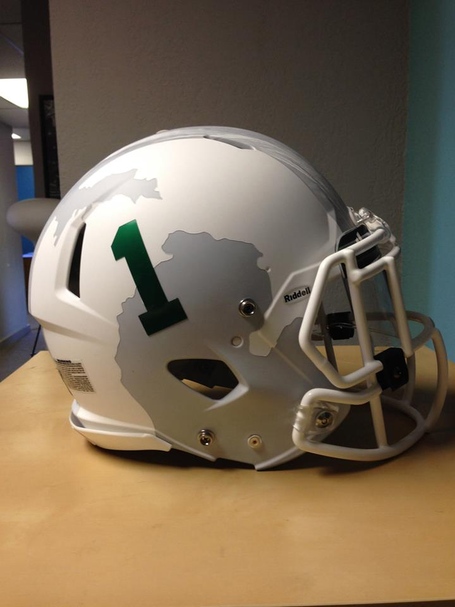 However, the wheat field helmet stripe is too much. 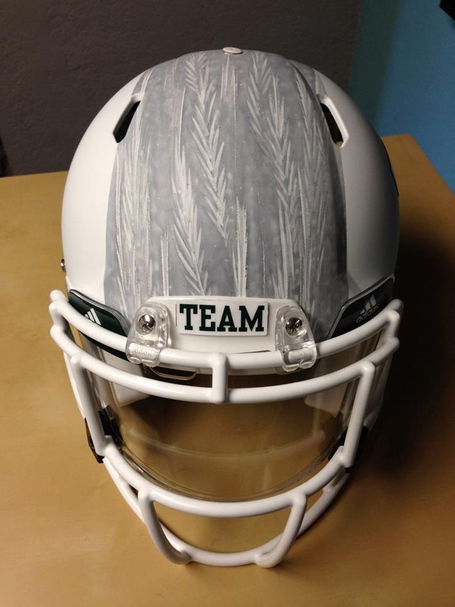 The Golden Flashes wore a lightning blot helmet, similar to the San Diego Chargers', for their Homecoming game against Northern Illinois. Kent State first wore a helmet with this logo in 1964, four years after the Chargers came into existence. 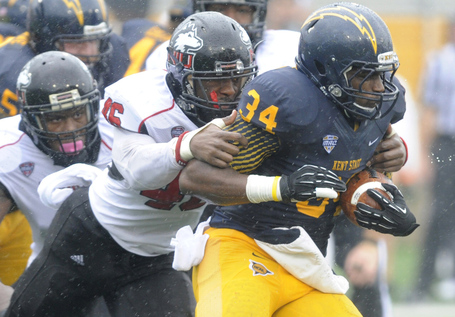 During the month of October, many college teams honor those affected by breast cancer by wearing pink jerseys or accessories. According to my sources, the Rockets will be wearing a primarily pink jersey against Navy later this month.

Staying with the breast cancer awareness theme, the Minutemen will be wearing a black helmet against Miami. With both teams coming into the matchup winless and Miami likely wearing their bowling ball-inspired helmets, it's probably a good thing the game isn't on television.

The Cowboys struggle to find an aesthetically pleasing look with their school colors, and adding pink only makes it worse. Cover your eyes.

1 in 8 women are affected each year by breast cancer. WYO FB is wearing Pink this week to raise #awareness #gowyo pic.twitter.com/z3U14PtlXA

After wearing a flame inspired helmet against Notre Dame, the Sun Devils will be back in a traditional look against Colorado. The fans voted for the team to wear the maroon helmets worn in the 62-41 victory over USC, paired with their standard home jerseys. 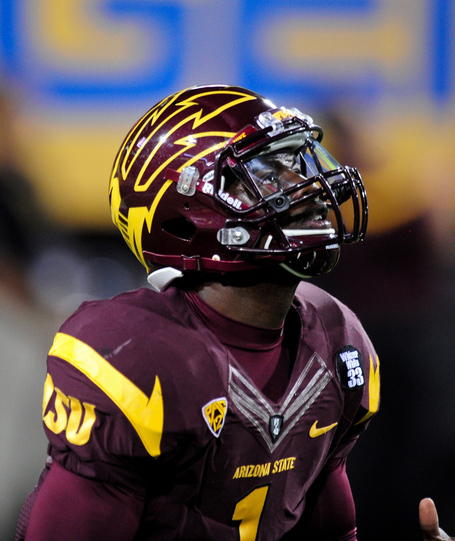 In their Pac 12 opener, the Ducks wore added a new helmet to their arsenal: a liquid green helmet with gray wings. I'd be surprised if the Ducks didn't break out something special for their national televised game at Washington. 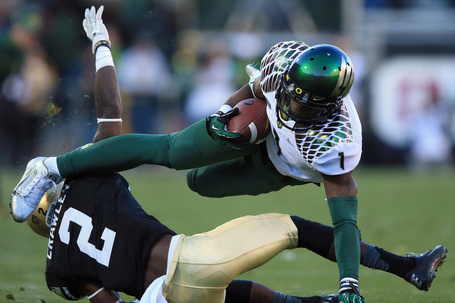 The Huskies have worn black jerseys before, but will pair those with a matte black helmet in the aforementioned matchup with Oregon. While it is "black for black's sake", I can't help but like this look.

Up close picture of the black #Washington helmets on the set of #CollegeGameDay. pic.twitter.com/Ot1TTW1BSd