When Ohio State schedules a football game with somebody, it takes a lot more than a handshake and text message. Multiple page contracts are signed to cover just about every contingency. We take a closer look at some of them.

Ohio State recently completed their 2015 scheduling, bringing Hawaii and Western Michigan into the fold to join Northern Illinois and a road trip to Virginia Tech. We know that these matchups are often scheduled years in advance, which makes it difficult to replace a team on fairly short notice (hello, San Diego State), and carries the risk that one of those major headliners you scheduled might stink by the time you play (hi, Cal).

These matchups are also major business deals, involving hundreds of people and of course, millions of dollars. That means these games can't be set up with a handshake, text message or tweet. Lawyers need to get involved, and that means contracts.

Land-Grant Holy Land has obtained the official contracts for Ohio State's 2013 and 2015 non-conference games, some details of which we will highlight below. While many of these contracts have similar language, there are a few interesting differences, or facts worth noting:

* First, the Virginia Tech document was signed by Virginia Tech athletic director Jim Weaver on 11/13/2002. That was so long ago that the original contract language makes reference to getting permission from the Big East. A decade later, Virginia Tech's been in another league for nine years and the Big East doesn't even sponsor football. 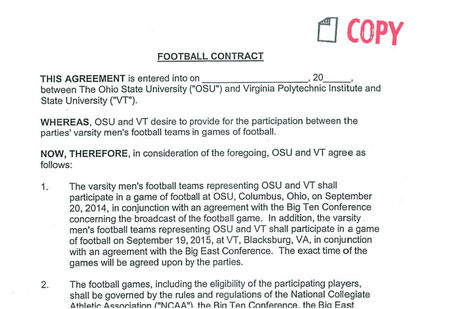 * That's also another reminder for how far in advance some of these larger deals need to be made. Forget predicting if Virginia Tech is going to be good or not in a decade, nobody could even predict what conference they were going to be in.

* So who gets the biggest visiting ticket allotment? In 2015, it's actually Northern Illinois, who gets a 4,000 ticket allotment. Virginia Tech gets 3,600 (and OSU will get 3,600 for their trip to Blacksburg), Western Michigan gets 2,500 (including tickets for their band, should they come), and Hawaii gets 2,000 (including band). Virginia Tech is a larger school than NIU, *and* is over 100 miles closer to Columbus, but gets 400 fewer tickets.

* The contract stipulates what happens if each game cannot be played due to unforeseen circumstances, including "riots". Feel free to insert your own "Columbus couch burning joke" here.

* Per the contracts, Ohio State will spend $3.1 million dollars on bringing NIU, WMU and Hawaii to Ohio State in 2015, with $1.2 million going to Hawaii, $1 million going to Western Michigan, and $900,000 going to Northern Illinois. If you subtract the $350,000 that Ohio State is due for making the road trip to Virginia Tech, that's still a net payout of $2.75 million for non conference scheduling. That's not a small amount of money.

* According to the contracts, Florida A&M was due a $850,000 payout for getting clobbered this season. This number had previously been reported as $900,000, but it's entirely possible that the number was adjusted after the contract was signed. San Diego State was due $1.2 million and Buffalo $1 million. 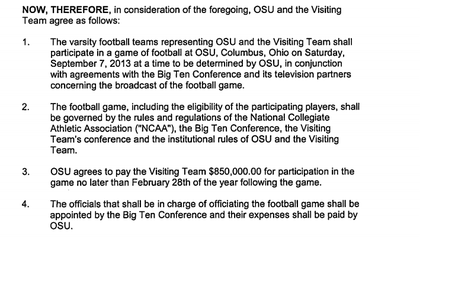 So what do we make of all this? In case it wasn't clear before, these events are massive exchanges of currency and no small undertaking. OSU tries to plan for everything, from how many cheerleaders can go to the game, to what happens if the game is postponed due to war.

You can't plan for how good somebody is, but Ohio State will try to plan for just about everything else.