What are the keys to Ohio State-Iowa?

The Buckeyes haven't seen the Hawkeyes in a few years, so we called on some expert insiders to give us info we might have missed.

Share All sharing options for: What are the keys to Ohio State-Iowa?

Ohio State and Iowa haven't tussled in a few years, and while the Buckeyes are big favorites against the 4-2 Hawkeyes this season, Iowa remains a bit of an unknown to many Buckeye fans. We sat down with our friend RossWB over at SB Nation's excellent (no really, this website is the best) Iowa blog, Black Heart Gold Pants, to break down all things Iowa for us. You can follow Ross on Twitter at @RossWB and the entire BHGP gang at @BHGP.

Who are you and what are you doing in Ohio Stadium? In all seriousness, who are a few of the players Ohio State fans should be weary of if they haven't seen Iowa play this season?

Despite being conference brethren for decades, Iowa and Ohio State really do feel a bit like strangers in football -- Iowa hasn't played Ohio State since 2010 and hasn't played in Columbus since 2009.  Judging by the future schedules, that trend isn't going to improve with the addition of Maryland and Rutgers to the league.  This Iowa team is also quite a bit different than the one that y'all played in 2010 (SPOILER ALERT: It's worse).

Iowa's offense has been remarkably balanced this year (1245 rushing yards vs. 1256 passing yards), but the playcalling still skews toward the run (279 rush attempts vs. 177 pass attempts).  Iowa's preference is still to establish a running game and control the game that way.  The main running back is Mark Weisman, a bruising bowling ball of a back who's proven to be a pretty solid bell cow: 624 yards on 126 carries.  What he lacks in speed, he makes up for in physicality and the ability to grind out additional yards after contact.  Iowa will mix in other faces in the rushing game --Damon Bullock has been Weisman's primary backup this year (65 carries, 256 yards), but Jordan Canzeri (24 carries, 115 yards) and LeShun Daniels, Jr. (19 carries, 84 yards) might see a few carries as well.  (Or not: they saw no action in Iowa's loss to Michigan State a few weeks ago.)  QB Jake Rudock is also a threat to take off and pick up a few yards on the ground, especially near the end zone -- he has 139 yards on 31 carries, including a team-best five touchdowns. 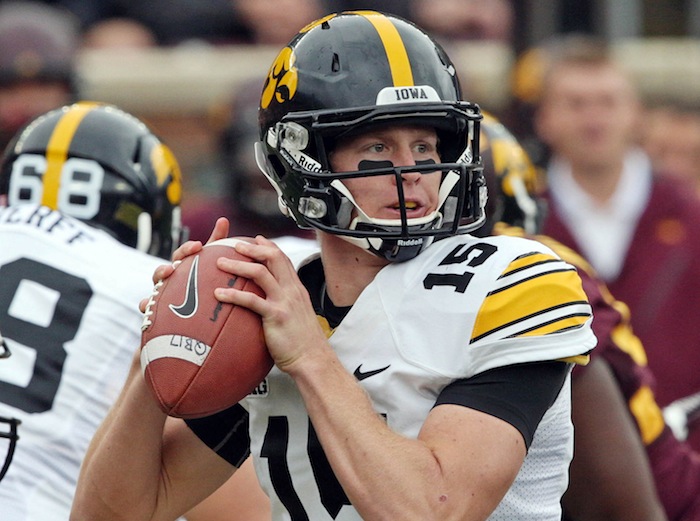 Rudock is a new face at QB, but he's one that Iowa fans are quickly warming up to.  He's already thrown more touchdown passes than last year's starter, James Vandenberg, managed (an admittedly paltry total of 7 TDs) and his composure and ability to shake off mistakes has been impressive.  I think arguably his two best performances this year have come in Iowa's two road games (at Iowa State, at Minnesota), so I'm optimistic that he won't be too overwhelmed by Ohio Stadium on Saturday.  His main target through the passing game has been Kevonte Martin-Manley (26 catches, 225 yards), who's a classic possession receiver: he runs good routes, he has good hands, and he catches a ton of passes.  Iowa's main explosive threat in the passing game is JUCO transfer Damond Powell, whose role in the offense has slowly been getting ramped up each week.  Despite playing far fewer snaps (and having only 6 catches), he's managed to equal Martin-Manley in receiving yards (225).  He has the sort of speed that Iowa very rarely has at the wide receiver position, which is an exciting proposition.

How is year two of the Greg Davis experiment? Is the call for his head as strong as it was in year one?

Nope.  There were a lot of disgruntled fans (understandably) after last year's offensive implosion, but they're a bit more... gruntled this year, thanks to the Iowa offense displaying genuine signs of competence this year.  Iowa ran for 200+ yards in the first five games of the season (the first time that had ever happened in Kirk Ferentz's lengthy tenure at Iowa) and Iowa picked up 400+ yards of total offense in all of those games, too.  The one issue that still raised some red flags was the failure of the offense to turn all of those yards into more points.

Iowa's averaging 29.7 ppg this year (which is almost squarely in the middle of the national rankings), but if you remove the 59-point explosion against Western Michigan (which featured four touchdowns from the defense and special teams, so it wasn't like the offense was doing all the damage there anyway), that figure dips to an unimpressive 23.8 ppg figure.  That lack of points kept otherwise-dominant wins over Iowa State, Missouri State, and Minnesota from being as comfortable as they should have been.  The satisfaction with the offense was also considerably lower after the wet fart they put up against Michigan State two weeks ago (sans a pair of touchdown drives in the second quarter); our hope is that that lousy performance had more to do with Sparty's very good defense and less to do with Iowa's offensive struggles.  We should find out the answer to that question over the next few weeks.

What would it take to get Ferentz fired? A massive off-field scandal...or the complete and utter implosion of the football team

What in all seriousness would it take to get Kirk Ferentz fired? A bake sale? A university endowment default?

Realistically?  Either a massive off-field scandal that would allow the university to fire him for cause (thus freeing them from that albatross of a buyout clause) or the complete and utter implosion of the football team.  Would an 0-6 finish to this season be enough to do it?  It's possible (especially if Iowa gets completely destroyed in several of those games), but I'm not entirely convinced.

For one thing, Iowa fans tend to be incredibly patient before abandoning a coach or program (Todd Lickliter got fired after just three years in basketball, but his tenure started badly and got worse every year that followed; Ferentz has built up considerably more capital with Iowa fans with his Big Ten title-winning seasons and Orange Bowl trips).  For another thing, that buyout clause is really, really, really goddamn big.  Even with those nice BTN checks swelling our coffers, that's not an easy sum to manage.

The thing that will doom Ferentz is if season ticket sales crater.  That's what ultimately persuaded Iowa to pull the plug on Lickliter after just three years; the basketball program was shedding season ticket holders in droves and attendance was catastrophic.  That's not happening with Iowa football -- yet.  There were some red flags this year in terms of softer season ticket sales and lower attendances than normal, but for now ticket sales remain at a viable level.  Would that still be the case if Iowa finishes 4-8 again?  I don't know.

Do you see Iowa contending for a division title at any point in the near future? If not, what needs to change for that to happen?

Iowa fans have pointed to 2014 as a potential season to contend for a few years now.  Part of that's a favorable schedule -- compared to this year, Iowa trades games against Ohio State, Michigan, and Michigan State for games with Illinois, Indiana, and Maryland -- but part of that is due to a team that should be reaching the peak of its development curve.

The Iowa program under Ferentz has always been a developmental one; when the team is full of youth, things can get ugly and the records tend to be unimpressive, but when the team has more experience, that's when the Iowa program tends to excel and put together its best season.  It's a function of the sort of players Iowa tends to get -- you can win with 2-3* types, but they typically need to be in the program for at least 2-3 years to get the increased size, strength, and experience necessary to compete at a high level.  This year's Iowa team is relatively young -- they should return the majority of the offense and defense next year, although there will be a few big holes to fill (particularly the LB corps -- Iowa's three starting LBs this year are their best defensive players this year and they're also all seniors) -- so the hope is that the seasoning that this year provides to those returning players, plus a friendlier schedule, results in an Iowa team that has a legitimate shot to challenge for a West Division title.

Urban Meyer's spoke incredibly highly of Iowa's d-line. If the Hawkeyes make Braxton Miller try to beat them with his arm, will the back 7 be up to the task?

It's interesting to hear him offer so much praise to Iowa's defensive line because entering the season, that was probably the biggest question mark Iowa had on defense.  Through six games, the answer to that question has been mostly favorable.  The defensive line has been strong -- against the run, at least.  The front four is certainly a big reason why Iowa's allowing just 88.5 ypg on the ground this year.  Unfortunately, they're not nearly so good in the pass rush department (4 sacks, 10 QB hurries).  Iowa's best pass rush has come via blitzing linebackers and defensive backs, which obviously opens up holes elsewhere in the defense.

I think Iowa probably will try to make Miller beat them with his arm... and if y'all have good receivers (and you do), there's a good chance that you'll be able to do just that.  Iowa has given up big plays through the passing game to virtually every opponent they've played this year (Western Michigan might have been the lone exception), so Iowa fans are certainly nervous about what Miller, Philly Brown and Devin Smith could do through the air.  Iowa's started a true freshman cornerback for most of this season and the two safeties are still prone to positioning gaffes that lead to coverage breakdowns and open receivers; couple that with a sketchy pass rush and, well, you can probably see why we'll be covering our eyes on plays where Braxton Miller slings the ball downfield.

Iowa had a similar streak going a few seasons ago and, honestly, it's a fluke more than it is a sign that Iowa's defense has a special force field that deflects running backs when they get near the goal line.  (Although that would be pretty fantastic.)  That said, Iowa's front seven is pretty stout (and easily the strongest part of the defense) and Iowa has done an excellent job of limiting the damage when teams get into the red zone this year.  Teams have scored on 6 of 9 trips inside the Iowa 20-yard line this year (67%, T-7th nationally), but only one of those six scores has been a touchdown.  Granted, that's also a pretty small sample size.  But I would say that the "no rushing touchdowns allowed" is a function of luck and also the fact that the Iowa front seven is very good at damage limitation when the field shrinks.

I would love to see Jake Rudock and C.J. Fiedorowicz channel the spirit of Chuck Hartlieb and Marv Cook to help lead Iowa to a stunning victory in the 'Shoe on Saturday.  I would also love a money tree, a gumdrop fountain, and a unicorn.  Unfortunately, I stopped sniffing glue a few weeks ago.  Ohio State will win this game; the only question is how bloody the final score gets.  I'll go with Ohio State 38, Iowa 17.  Be gentle, Buckeye bros.