From coast to coast, the college football uniform landscape is always changing. Land-Grant Holy Land has you covered on what each team looks like this weekend.

With fifth-ranked Florida State coming to town, the Tigers were rumored to be wearing their purple uniforms. However, the school already announced they'd be wearing purple in the Military Appreciation game against The Citadel.

Clemson will have a "Purple Out" for Military Appreciation Day Nov. 23 vs. The Citadel.

The Tar Heels looked like the Tar Pits against Miami (FL) on Thursday night. Dubbed Zero Dark Thursday, the team wore black uniforms and a black helmet in the loss to the Hurricanes. 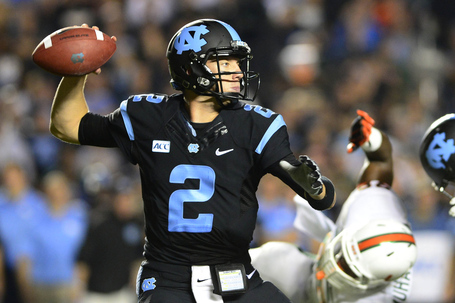 The Cavaliers wore orange helmets in their matchup with Maryland, marking the only the third time since 1978 that the team has worn orange lids. The Wahoos wore this helmet in the 2012 Chick-fil-A Bowl, as well as in a victory over Penn State the following season. 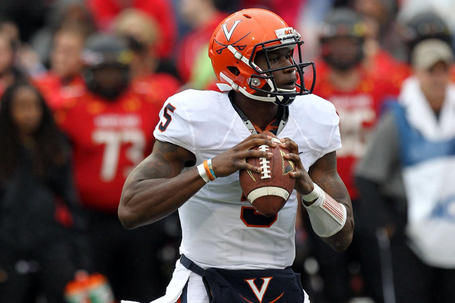 In the offseason, the Hoosiers unveiled six helmets they could choose from. Thus far, the team has worn a helmet featuring the interlocking IU, the state flag, the standard block I, the candy cane chrome, and against Michigan State, the team wore a white helmet with an oddly shaped stripe. 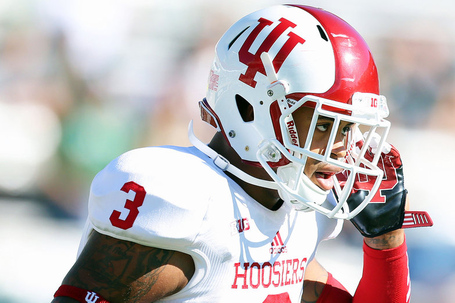 For the first time since 2004, the Illini will wear an all-orange getup. The template that the team is wearing has been around since about 2004, as well. However, Illinois will be receiving much-needed Nike rebrand in the offseason.

Illinois "breaking out all-orange uniforms for the first time since 2004" -> http://t.co/EzHgqorAtw pic.twitter.com/lrVQvZ8mKP

New head coach Gary Andersen put his stamp on the Badgers by introducing a red helmet, to be worn in select games. The helmet that was first worn against Tennessee Tech was dusted off and worn in the win over Northwestern. 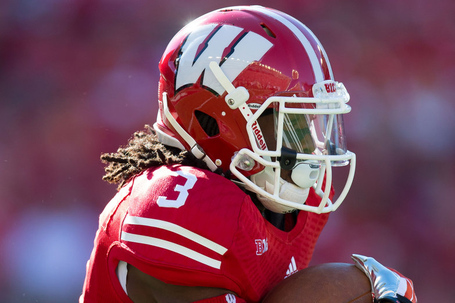 According to Zach Nyborg, Wisconsin's Director of Football Operations, some tweaks will be made to the Badgers uniforms this weekend. Stay tuned.

Some new tweaks will be unveiled this week to the Badgers look... Pretty excited about it. Stay tuned!

The Bears' equipment staff tweeted that team will be returning to its classic look for their homecoming game versus Iowa State. Like most schools during October, the team will wear pink accessories for Breast Cancer Awareness.

Here is the uni combo for Homecoming. We are wearing pink for #BCA #traditional #SicISU pic.twitter.com/0sfGrVlF5J

The 2008 Orange Bowl victory seems like eons ago as the Jayhawks are among the worst teams in college football. Their uniforms have no continuity, either. In the offseason, Charlie Weis introduced a set of five helmets to be worn this year, which don't compare to the elegant interlocking KU helmet of the past. Against TCU, the Jayhawks wore the red helmet, making the decal barely visible. 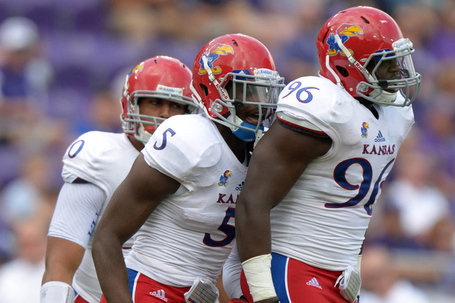 The Sooners wore a gold-trimmed jersey for the Red River Rivalry game against Texas. Unfortunately for the Sooners, the Golden Hat trophy is going back to Austin. Expect the Sooners to update to Nike's latest template, the Pro Combat Hypercool uniform, in the offseason. 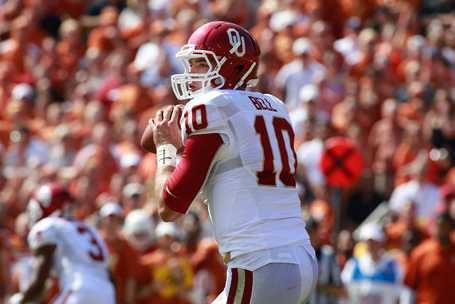 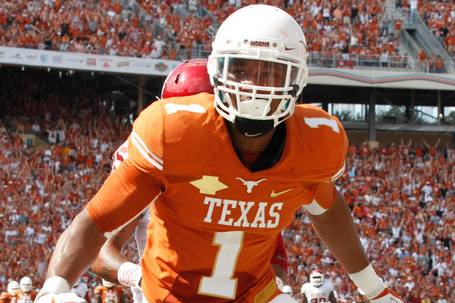 As most schools that feature multiple looks do, the Horned Frogs returned to their classic purple helmets and black jerseys for homecoming. 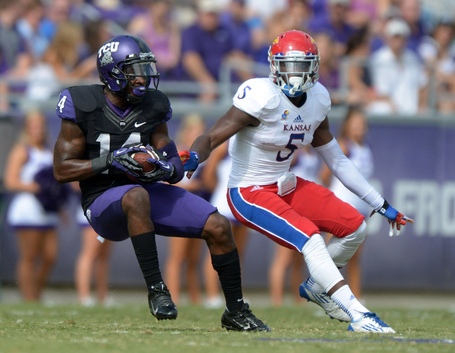 The Midshipmen will be leaving Nike for Under Armour at the conclusion of the season. The Maryland-based company says they'll go all out for the Naval Academy, but nothing will be better than the Pro Combat set that Nike created. 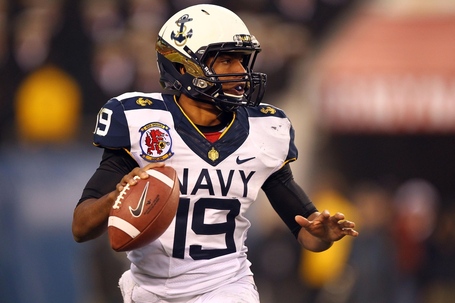 When the Naval Academy travels to Toledo, they'll be met by a team wearing primarily pink uniforms, according to my sources. In honor of those affected by breast cancer, the Rockets are expected to pair these jerseys with their blue helmets and pants.

When Cincinnati lineman Ben Flick passed away in a car accident, the Broncos wore a helmet decal in his honor. Against Ball State, the team will wear a black helmet with a pink bronco logo in honor of those affected by breast cancer.

Continuing the Breast Cancer Awareness theme, the Cowboys wore a pink logo on their helmet against New Mexico. This week, that logo takes on the look of the Wyoming state flag as the Pokes take on Colorado State in the Border War.

You'll have to stay up late to see it, but the Wildcats will be wearing all-blue uniforms against Utah. Here's to hoping that Utah brings their red uniforms with them for a color-on-color matchup.

The Ducks traveled to Husky Stadium, known as one of the loudest venues in college football, and appropriately broke out their Sonic Boom helmets. 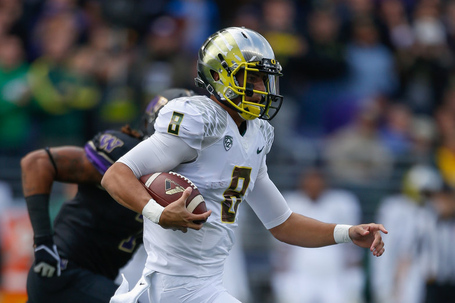 This weekend, the team will wear pink helmets and accessories against Washington State. After the game, the helmets will be auctioned off, with 100% of the proceeds going to the Kay Yow Cancer Fund. 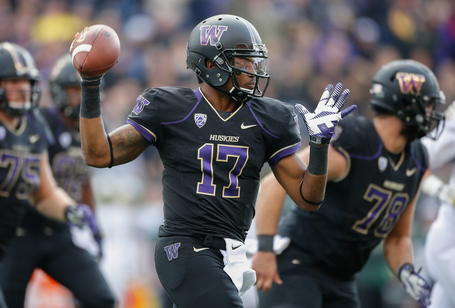 The Wildcats checkerboard-patterned jerseys, while more appropriate for Tennessee, are one of the more unique sets in college football. Unfortunately, it's often paired with a black helmet or pants, ruining the set. For homecoming, though, Big Blue Nation will see their team in the traditional blue helmets, blue jerseys, and white pants. 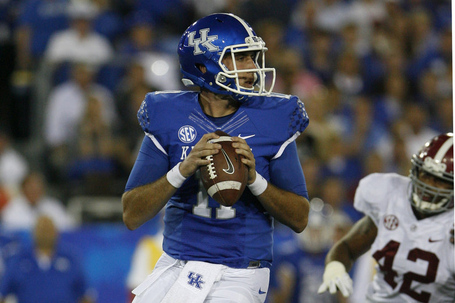 Head coach Gary Pinkel announced, via his website, that the Tigers will wear their alternate jerseys today against Florida. This is the same combination wore in the Tigers' inaugural SEC game versus Georgia. 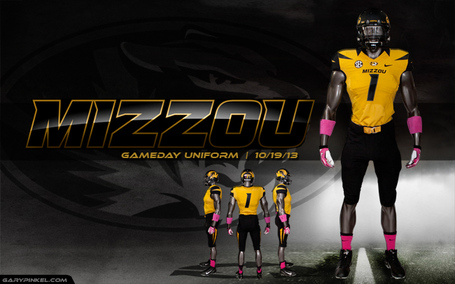 The Volunteers are wearing orange on orange against South Carolina, a nod to the uniforms worn during the late Reggie White's time in Knoxville. This combination was last worn against Auburn in 2009.