Former Buckeye defensive back Chimdi Chekwa sat down with Land-Grant Holy Land to talk Ohio State, transitioning from life in college to life in the pros, and more.

A fourth-round pick (113 overall) in the 2011 NFL Draft, Chimdi Chekwa of the Oakland Raiders has struggled through injuries to be a solid contributor in the league. The former Ohio State defensive back sat down with us to discuss his time in Columbus, his successes and struggles in the NFL, as well as a host of other questions.

I would say that the speed of the NFL is so much greater than college. The players are faster and you have to pick up what everyone is doing that much faster. Your reaction time has to be quicker and it takes you a little bit of time to adjust.

The easiest thing was the fact that I played on a big stage at Ohio State. We had a big game here and there, but every game in the NFL is a big game. I was just able to stay calm no matter the situation.

Since every game at Ohio State isn't a big game, where you may be playing an easy game against a small school instead of the likes of Michigan and Wisconsin every week, what is the biggest difference between your preparations in college and in the NFL?

You have to figure out a way to take care of your body. Maintenance is the biggest key. You get beat up every week and it takes its toll. When I was at Ohio State, there were a lot of times the coaches took me out in the second half. In the NFL, I don't get that opportunity because the teams tend to be evenly matched and there aren't many blowouts. When you play that much, you have to figure out a way to maintain your body from week to week because it'll take a toll on you real quick.

Besides maintenance, what's the difference in your preparations for the game now that you're in the NFL than it was when you were in school?

In the NFL, you have more time. I have meetings and practice, but I'm done around 3:30 or 4 pm. There are times I don't know what to do (with myself). In college, I had class, meetings, and practice until 7 or 7:30 pm, and then I'd have to do homework and watch film.

When you broke your hand in the Sugar Bowl, what were your immediate thoughts? Were you afraid that it would affect your draft stock?

The first thing that popped into my mind was ‘can I still play?' Obviously, the immediate though was whether it would affect me moving forward, like if I could still catch the ball. A lot of teams were worried, even though I'm a defensive back, was whether I'd be able to catch the ball once it healed. I wasn't concerned that my draft stock would fall, though, because I had gotten good feedback from teams.

With that feedback, where were you expecting to be drafted? What teams were interested in you?

My agent told me that I was probably going to be a late 2nd round or a 3rd round pick, but I ended up going in the 4th round to the Raiders. I met with them at the combine, where I ran fast (4.40 40-yard dash), and you know how Al Davis loved speed. There were a few other teams that showed interest, and some reached out to me about coming to their team as an undrafted free agent, but I was glad I went when I did. It was just a big relief to get drafted by the Raiders. It was a breath of fresh air because it was out of my hands. I can't control what the teams do. I could only run, workout, and let my game speak for itself. It was just a sigh of relief.

I always wanted a career in football. As I grew older, though, I understood life better and understood that it may not happen. If I wasn't good enough, I would have just adjusted my dream to something in business or ran track.

While at Ohio State, you were on some of the best track teams in the Big Ten. Who all was a part of those teams?

My freshman year, I was the last leg of a 4x100 team with Malcolm Jenkins and we finished 4th in the Big Ten. My junior year, though, I was on a team with Lamaar Thomas, who ended up transferring to New Mexico, but we won the Big Ten championship that year. 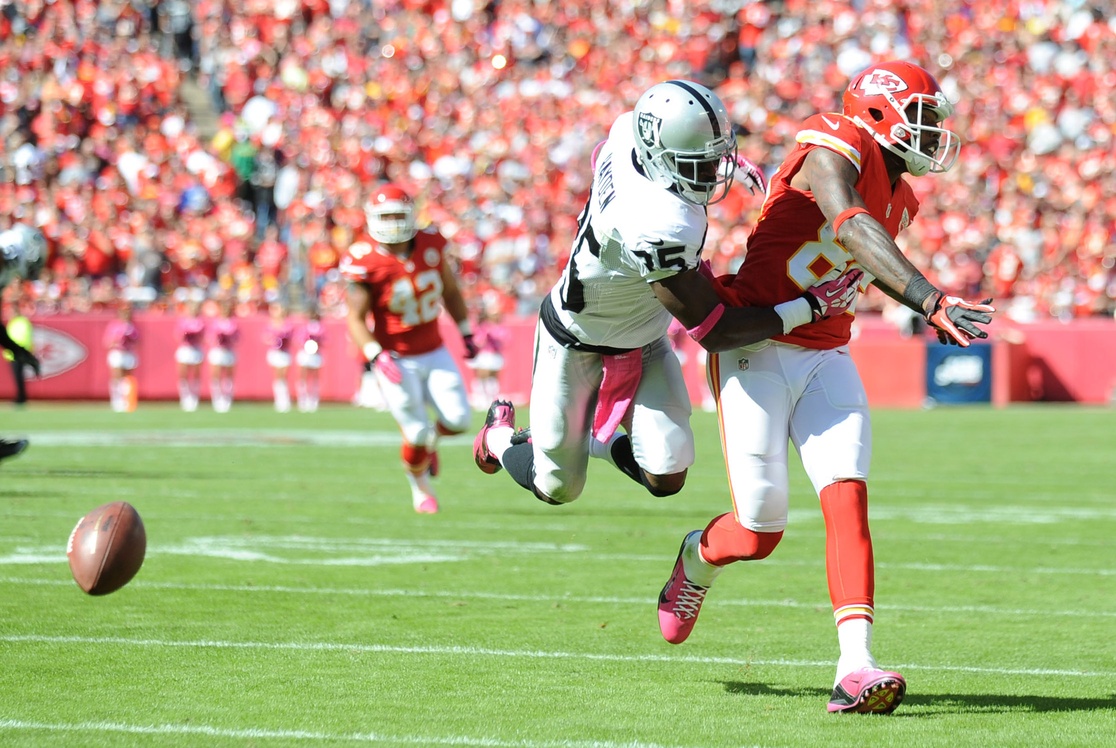 If football didn't work out, you said you may have ventured into business.. Are you doing anything business-wise in your free time?

I have a few investments, but nothing big. I graduated with a degree in Accounting from Ohio State, so I'm thinking about doing an internship in Columbus, or maybe California depending on where I'm training in the offseason.

Those who knew him said that Al Davis, the former owner of the Raiders, was quite a business man himself. Were you able to have any conversations with Mr. Davis before he passed away?

I was able to meet with Al a couple of times before he passed, but we never talked about anything in detail. I was only a rookie when he passed away.

Is there a difference in the way the organization is run under Al compared to his son?

There's definitely a difference, especially after Al's son hired GM Reggie McKenzie. The biggest difference between the two is that Al was such a football mind, while his son is more of the business mind.

I'd consider Raider fans and Buckeyes fans to be very similar. Do you agree?

In number of fans? Yes. Wherever I go, there's always going to be Raiders' fans. There are Buckeyes everywhere I go, too. However, I think that they're very different in the way they act. Raiders' fans are crazy.

If Ohio State fans were to look back on your time in the Scarlet and Gray, what would they say about your tenure?

I hope they'd say I played hard and played with class.

There's a ton of pressure that comes with playing for Ohio State. Playing at a position where Buckeye greats Shawn Springs, Antoine Winfield, Malcolm Jenkins, and Chris Gamble once roamed, did you feel even more pressure?

I embraced the pressure. I made it a goal to be the next great defensive back at Ohio State

Do you keep in touch with your former teammates or any other Buckeyes?

I talk to Bryant Browning all the time. He's my former roommate and best friend. I sometimes talk to Brandon Saine, Dane Sanzenbacher, and other people in that senior class. We're all real close. We go to each others weddings. I talked to Donald Washington a couple weeks ago. Malcolm Jenkins too.

It would have to be winning the Rose Bowl. We were playing the "great offense" of Oregon and had "no speed" on our team to match up with them. Not only that, but the Rose Bowl is such a great tradition.

What has been your career defining moment as a member of the Raiders?

I haven't had one yet. Nothing really stands out, other than being drafted, but I hope to change that.

Who has been the most intimidating player you've ever played against, college or pros?

I broke up a pass to Plaxico Burress on 4th down and we went on to win the game, which was like my ‘welcome to the NFL' moment

My rookie year, we played the Jets and I was matched up with Plaxico Burress. It was my first game seeing any real playing time. I pulled my hammy on a special teams play, but I still played through it. I had to play Plaxico one-on-one the whole game. You know, typical Al Davis defense where the corners play man-to-man. I had no help over the top, either, because we were shaded over to double cover Santonio (Holmes). It was real intimidating lining up from him, with a hurt hammy, and all he wanted to do was talk trash the entire game. I broke up a pass to him on 4th down and we went on to win the game, which was like my ‘welcome to the NFL' moment.

What is it like to have the chance to learn from a former Heisman Trophy Winner and All-Pro cornerback/safety Charles Woodson?

It's a real good opportunity. I was really excited when he signed to come here. He's just a great football player and has a great football mind. I get the opportunity to learn from and play under someone who has played in the league for a long time, which is something I want to do.

Is there any trash talking about Ohio State and Michigan between the two of you, and maybe even Terrelle Pryor?

Not really. I'm not a real big trash talker, but we will have a bet when the game rolls around.

Speaking of Terrelle, how do you think he has matured since leaving Ohio State?

He's matured a lot. When you grow up, you mature. I could see him starting to mature when he was in college, even when all the stuff him and Tressel came out. He's continued to mature and I've seen him grow even from the time we hung out as rookies to now. He's just focused and determined to prove that he's a new person on and off the field.

Tressel has always been a person that players looked to for guidance, no matter if it was on the football field or in life. Do you speak to your former coach very often?

I don't talk to him often, but I try to keep in touch with him as much as I can. He's not only my coach, but he's like a father to me. Terrelle and him are especially close, though. I try to keep in touch with all of my coaches. Taver Johnson was my position coach, he's at Arkansas now. Darrell Hazell too, who's now the head coach at Purdue. He was the wide receiver's coach, but he recruited me out of Florida.

Being from Florida, was there any worry about heading north to Ohio State, instead of staying in-state?

You know, Ohio State is a household name. Nobody besides Florida Gator fans would give me a hard time about it. And I'm talking die-hard Florida fans. Everybody in the state respects Ohio State. I grew up in New Orleans, but moved to Florida, so leaving the state wasn't that hard.

So going back home to New Orleans for the 2011 Sugar Bowl was the perfect way to end your Ohio State career?

Absolutely. To be able to play in front of my family and friends in my final game in college was great, even though I only played a quarter before breaking my hand.

I think they finish the year undefeated. There's never a year that you don't expect that we go undefeated. It's a realistic expectation to win a national championship, and this year is no different.