Former Buckeye offensive lineman Jim Cordle made a name for himself as an undrafted free agent and is now a starter in the NFL. Cordle took some time out of his schedule to sit down with Land-Grant Holy Land, as we discuss his transition from college to the pros, and more.

Signed as an undrafted free agent at league minimum pay, Jim Cordle worked his way into a starting role with the New York Football Giants. After making his first start three seasons into his career, Cordle hopes that he's found a home in the Big Apple. The former Ohio State offensive lineman sat down with us to discuss his time in Columbus, his successes and struggles in the NFL, as well as a host of other questions.

I'd say the toughest thing about the NFL is the insecurities that come with it. It's tough enough to get into the league, but it's even tougher to stay here. The fact that you don't have job security, especially as an undrafted free agent like myself, that's the toughest part.

The transition from Ohio State to the NFL was fairly easy. The players in the NFL are the best of the best, and at Ohio State, you're already playing that caliber of player. Playing on the biggest stage got me ready for the level of competition I'd be facing, the difficult practices, and taught me how to prepare week-to-week.

The players in the NFL are the best of the best, and at Ohio State, you're already playing that caliber of player

As you already said that you play against the best of the best week in and week out, but in college, you may have had an easy game against an overmatched opponent here and there. Is there a difference in the way you view each game?

In college, every game mattered. You would prepare like the only game mattered was the one in front of you. Obviously, when we faced a smaller school, there would be a lax in preparation. In the NFL, every team is good, so you can't take any practices or plays off.

What's the difference in your preparations for the game now that you're in the NFL than it was when you were in school?

At Ohio State, I was in class all day until we had practice. As soon as practice was over, I'd hit the training table until about 8 pm, when I'd finally go home. I'd get to my books, do my assignments, and then do the same thing the next day. I obviously have more free time now that I'm not in class all day. When I get home from practice, I go right to the couch and pull out my iPad and notebooks and study the opponent there. I'll just ice my body and get ready for the next game. Outside of that, I have some charity events I participate in. In fact, I'm going to a charity event for (former Ohio State defensive end) Matt Finkes tonight.

After you graduated, what feedback were you receiving from teams leading up to the draft?

Coming through the ranks, especially as a junior, I was rated high. I moved to tackle my senior year, where I missed four games. I had my right ankle scoped during the season, and then I injured my other ankle in the East-West Shrine Game. I ended up not being drafted, but it all worked out in the end. All I wanted was a shot to prove myself, which works in my favor. Unlike a high draft pick, I had to go out and make a name for myself.

Were there a lot of teams interested in you as an undrafted free agent?

"My agent and I talked to a few other teams, but we felt that the Giants were the best opportunity for me. They run a pro-style offense, same as Ohio State, so that just made it an easy choice. Being a free agent added some pressure, but gave me an advantage in my career. It made me work harder. I still had to outwork guys that were high draft picks, but it was beneficial to me and will allow me to stick around longer.

What was the first thing you bought when you signed your contract?

I only got a $5,000 bonus, which is just okay for an undrafted free agent. My contract wasn't guaranteed either, so I didn't go out and buy a house or anything. I think I just went out to dinner.

My parents are both teachers and my dad is a high school football coach, and I wanted to be the same. Growing up and playing football, it was always a dream of mine. I wanted to play at Ohio State and then go to the NFL. When I'm done with football, I'll probably get into coaching. I might follow in (former Buckeye offensive tackle) Kirk Barton's footsteps. He's a graduate assistant at Ohio State now. I might go back to Fisher (college of business) and get my MBA.

Growing up and playing football, it was always a dream of mine to play at Ohio State

If Ohio State fans were to look back on your time in Columbus, what would they say about your tenure?

I hope they'd look at me as a guy that did whatever was asked of him. I played four positions, was a solid contributor, and a leader. We won five Big Ten championships and a Rose Bowl while I was there.

Would you say that Ohio State fans and New York Football Giants fans are similar?

I would. They're both very passionate fan bases. One thing about Columbus is that you only have the Buckeyes. There's not a professional football team, so everyone is die-hard Ohio State fans. It's the same with New York. There's not really any college football teams, so come Sunday, they put all their effort into the Giants. They both have great traditions and great fans that support us, no matter what.

Do you keep in touch with your former teammates or any other Buckeyes, such as Nick Mangold, who is also in New York and plays for the Jets?

I talk to (offensive line coach) Jim Bollman and Tressel all the time. I see Nick, and our families are close, but it's not like we're near each other. I love seeing other Buckeyes after games, though, where we'll meet up and talk a little bit. When I go back to Columbus to train, I'll see Anthony Schlegel, or other guys in there training. So yeah, I talk to them as much as I can. 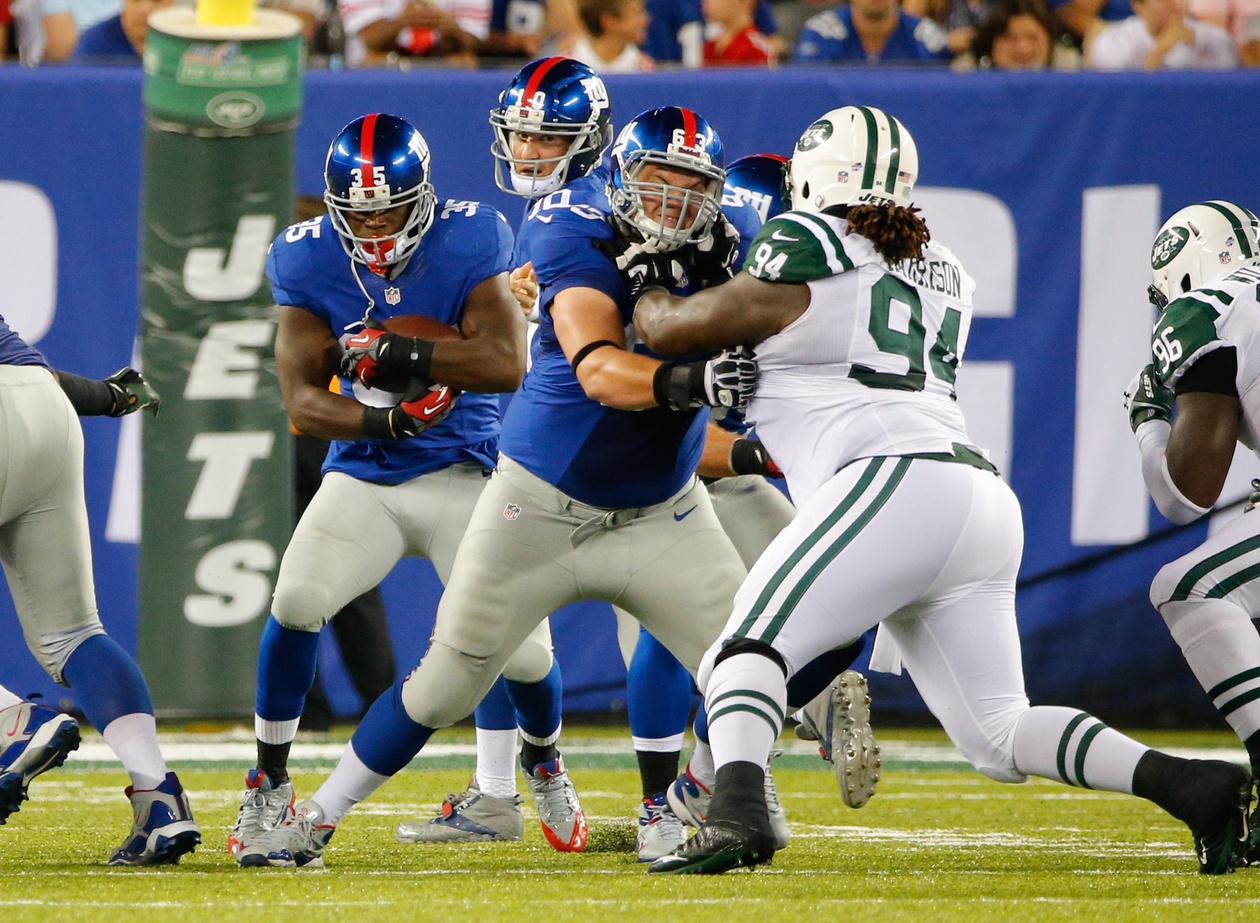 Do you ever lobby for the Giants to sign any former Buckeyes? I know the Giants didn't have depth at the running back position before the season, did you maybe talk to the coaches about signing Beanie Wells this offseason?

I know we brought in Beanie in the offseason, but we re-signed Brandon Jacobs. It was down to Brandon, Willis McGahee, and Beanie, but the team decided to sign Brandon. I'd love to have more Buckeyes on the team, but I also trust our front office to make the best decisions for the team.

I'd say the Rose Bowl win over Oregon. We hadn't had a bowl win in a few years, and the team hadn't been in a Rose Bowl since 1997, so it was a huge win for us.

What has been your career defining moment as a member of the Giants?

My favorite moment would be the Super Bowl win against the Patriots. Not a lot of guys can say that they're a Super Bowl Champion, but I get to. However, my defining moment would have been my first start. Going from a backup, undrafted free agent to a starter is something special. It was definitely my ‘Welcome to the NFL' moment.

Not a lot of guys can say that they're a Super Bowl Champion, but I get to

After hitting the high point of winning the Super Bowl only two seasons ago, do you take the team struggling this season personally or do you understand that you can't win it every year?

It doesn't really bother me because I know each team is unique. We can still turn it around. We have the same quarterback, same players, and same coaches, but we've also had some injuries. We understand that the cards don't always fall in your favor, but don't get me wrong, it's still disappointing. Every game, we've played three solid quarters of football, except the Carolina game, but the ball hasn't been bouncing in our favor. Being in a division where the team's are all pretty close in the standings, we can still turn it around and make the playoffs.

Who has been the most intimidating player you've ever played against, college or pros?

My first start, a few weeks ago, we played the Chiefs and Dontari Poe was a problem. Heck, their whole defensive line is tough. They've had a good defense for a few years, but they weren't a good team. However, they've got a good quarterback now and they're probably one of the best teams in the league. I mean, they just got 10 sacks last week.