Last season the Buckeyes welcome two walk-ons to the fold: Jake Lorbach and Andrew Goldstein. The duo returns in 2013-2014.

Mark Titus set an impossibly high bar for walk-on basketball players at Ohio State. In addition to providing valuable practice repetitions and serving as consummate glue guys, Titus went the extra mile; by being the most web 2.0 sports figure in recent modern times and winning over basically the entire locker room (offer may or may not apply to certain individuals nicknamed "The Villain") through levity alike, Titus made the casual fan care about walk-ons beyond the usual human victory cigar element – he made them care about them getting into games and accomplishing as little as possible.

Last year, Ohio State welcomed 6-7 forward Jake Lorbach and 6-3 combo guard Andrew Goldstein to the fold just before the season started. The duo returns for another go at it in 2013-2014.

Previous season stats: Lorbach appeared in three games last year racking up four minutes in the process. He hit a free throw against Savannah State back in early December and then drew the jealousy of walk-ons across the country by nailing a second free throw against Iona in the second round of last year's NCAA Tournament.

Goldstein sat out last season due to NCAA transfer provisions.

Ohio State only had 10 scholarship players a year ago at this time. Particularly after bumping Alex Rogers from walk-on to scholarship status, the team had some roster spaces to fill. Enter Elyria, Ohio product Jake Lorbach and Marlboro, N.J. native (by way of Montclair State and Brookdale Community College) Andrew Goldstein.

As mentioned, Lorbach saw four minutes during the 2012-2013 season, and recorded two free throws to his name. So how did it feel for a walk-on to score during an NCAA Tournament game? Let's let him tell it himself:

"I took a deep breath before I shot the first one, and I had really good form and it felt really nice and it went down pure," Lorbach said Saturday in the Ohio State locker room, as the Buckeyes got ready to face No. 10 seed Iowa State on Sunday. "The second one, I got too excited and I lost all form and it clanked really bad. But I was still happy I scored."

Goldstein, because he originally started at Montclair State before transferring to a two-year community college, was unable to see the court last year.

Perhaps most notably, back during last month's Wisconsin football game, Lorbach completed his greatest feats to date as a Buckeye: he epically photobombed former Cav LeBron James of the Miami Heat. 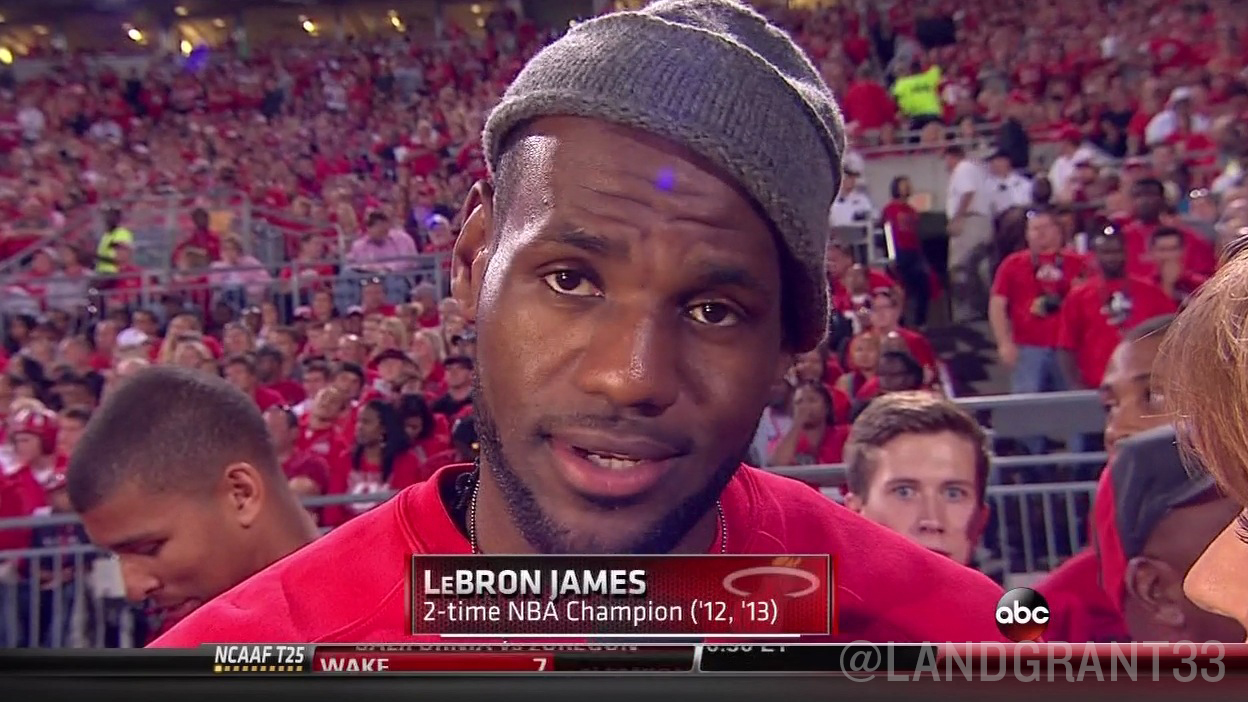 Mark Titus/Danny Peters minutes are probably the ceiling for these two. In the closing moments of games that are clearly out of reach (particularly during the non-conference slate), it's likely either or both will take the court and win the hearts and minds of the student section and Ohio State home fans in attendance alike. Both guys have worked their butts off to get this far, but that's the norm for walk-ons in situations like theirs. Their contributions come in the times we don't see: on the practice court and when the teams are working to get better in OSU's flashy new basketball facilities.

Goldstein scores his first career points and Lorbach finally shoots 100% from the charity stripe in an actual game. Maybe one or both starts a Blogspot blog.

The best thing to come from either this season is Lorbach's photo bombing of King James. That or either suffers an injury, which would just represent the universe being a total troll.