Penn State Head Coach Bill O'Brien got himself a very good freshman quarterback to run his pro-style system. Let's take a look at how Christian Hackenberg has adapted to playing quarterback in Happy Valley.

It seems as though Head Coach Bill O'Brien has gotten the right man to run his pro-style offense for the next few years. As everyone knows, O'Brien was the offensive coordinator for the New England Patriots before heading to Happy Valley last season where he turned Matt McGloin from an average passer, into one of the Big Ten's best quarterbacks. McGloin's completion percentage went up from 54% to 60.5% and went from 8 TD/ 5 INT in 2011 to 24 TD/ 5 INT in 2012.

With McGloin's departure, O'Brien nabbed the 5-star, number one rated pro-style passer from Fork Union, VA in Hackenberg. The 6-4, 220 lb gun slinger beat out JUCO transfer Tyler Ferguson in camp and has performed very well as an 18 year old freshman at a school where it is rare for a true freshman to start right away.

Hackenberg is third in the Big Ten in passing with 1672 yards and also has a respectable 58.4% completion percentage. He has also thrown for 11 touchdowns and 6 interceptions so far though six games. When looking through his situational statistics, one thing that stands out is that he passes very well in the fourth quarter and when the Nittany Lions have been down in games. In the fourth quarter, he is 28/44 (63%) and has thrown for 4 touchdowns and 1 interception. Even better, out of his 28 fourth quarter completions, 19 of them have gone for a first down. When trailing in games, Hackenberg is 59/94 (63%) and has thrown for 5 touchdowns to only 1 interception. This shows the high level of poise and calm demeanor that Hackenberg displays as a true freshman.

Here are some notes I jotted down while watching Hackenberg: 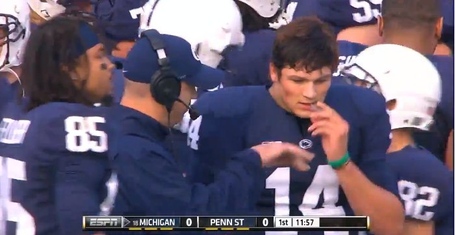 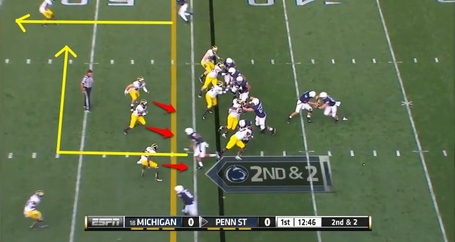 On 2nd & 2, Hackenberg fakes to running back Zach Zwinak and completes a first down to WR Brandon Felder (top of the screen). Hackenberg has an NFL caliber play fake, shrinking his body down to hide the ball from the defense, which pulls up the Michigan linebackers, leaving the tight end open on a crossing pattern and Felder. The Nittany Lions tend to run play- action on 2nd down.

2. Poise in the pocket

On 3rd & 9 at the Michigan 12-yard line, PSU comes out in an empty back set. Michigan only rushes three and drops eight, leaving Hackenberg four seconds to scan the field and thread the needle to Felder in the back of the end zone. He showed tremendous poise in the pocket, scanning the field without feeling imaginary pressure that young quarterbacks tend to feel when holding onto the ball for a couple of seconds.

3. Mobile in the pocket

3rd & 10 at the Michigan 24- yard line, the Wolverines drop eight and rush three again, with the same result. Hackenberg made time with his feet, sees Felder in single coverage with a smaller defensive back and throws the ball up high where only Felder can go and get it.

The Nittany Lions were down 7 points with 50 seconds left, needing an 80 yard touchdown drive to tie the game versus undefeated Michigan, let's see how Hackenberg does in his "welcome to big time college football" moment.

Penn State eventually won in overtime as Hackenberg completed his first career comeback.
How do you think the Buckeyes should defend the freshman quarterback?